"I thought I was the only one."

The words are said by Hanni Lévy, one of the 7,000 Jews who hid in Berlin after it was declared "free of Jews" by Nazi propaganda minister Joseph Goebbels in May of 1943. The sense of isolation, of being "the only one," was overwhelming: there was no way to collect or pass on information, no way to meet up with others in the same situation. It was every person for themselves. The Jews survived by adopting disguises, trading stuff on the black market, hiding in secret rooms and abandoned buildings; many were sheltered by Communists, also under siege (leftover resistance from the rise of Hitler), or by sympathetic Germans. Claus Räfle’s film "The Invisibles," using an equal mix of documentary and re-enactments, tells the story of four of those "invisible" Jews, Cioma Schönhaus, Eugen Friede, Ruth Arndt, and Hanni Lévy, all of whom are interviewed for the film. All four managed to hide in Berlin without detection from 1943 to the end of the war, an extraordinary feat. Of the 7,000 Jews who hid in Berlin, only 1,700 survived.

Along with the interview footage with the actual people, there are elaborate re-enactments of each person's tale. Cioma (Max Mauff) escapes deportation by forging documents that say he is employed in Berlin. A talented artist, he sets himself up as a forger, working for various people (some highly connected in the regime), narrowly escaping detection on a number of occasions. Hanni (Alice Dwyer) dyes her hair blonde, and wanders the streets, finding protection from an unlikely source. Ruth (Ruby O. Fee) hides beneath widow's garb, which blends her in with all the war widows in Berlin at that time, and then gets a job as a maid in the home of an actual Nazi. And Eugen (Aaron Altaras) is slightly protected at first since his father was a Gentile, but when that is no longer possible he is sheltered by a Communist family who hate the Nazis.

The reenactments are elaborate, mini feature-films, really. Räfle intersperses the action with grainy newsreel footage of Berlin in the 1930s, happy Germans smiling and shopping and eating: the sunshiny surface concealing the rot underneath.

"The Invisibles" is four separate narratives, woven together, pulled along by the interview subjects providing their testimony for the camera. These people are all in their 80s and 90s, and their memories of those days are vivid. They're all engaging storytellers. What we see in the re-enactments is what we've just been told in the interview, and so the sequences have a redundant quality. We're watching what we've just been told. This creates a distancing and fictionalizing atmosphere, which doesn't serve the film or the purposes behind it. Let the people speak for themselves.

It is, as always, the details that stick with you. Lévy describes the nervewracking sensation of being able to walk the streets openly, camouflaged by her blonde hair. Cioma's journey is the most gripping. He creates a bustling forgery business, working out of spare rooms or an abandoned garage, always on the verge of being detected. How Cioma works the system, how he flourishes in the underworld - what was a crime in normal times saves his life - would make a fascinating standalone tale. Eugen ends up in the home of a group of people who actively resist the Nazis, and who harbor the famed Werner Scharff, who actually escaped Theresienstadt, returning to the Jewish underground, telling horrible stories of what was being done to the Jews in the camps, stories which everyone found unbelievable at first. Scharff, Eugen, and the others form a group called the "Community for Peace and Development", whose main activity was trying to get the word out by secretly printing leaflets on an illegal printing press. (Scharff was arrested again in 1944 and executed at Sachsenhausen.)

Gathering testimony from survivors is an essential work of historians, even more so now since the "news" is increasingly vulnerable to manipulation, and with anti-Semitism on the rise, on the march yet again. Steven Spielberg established the Survivors of the Shoah Visual History Foundation in 1994, as a place to archive the taped stories of survivors. Survivors are old now. They are dying off. The interviews in "The Invisibles" are an important piece of the story: they show the ingenuity of those in hiding, the sheer daring it took to figure out the best way to survive. Lévy says, "I don't know if I was scared or not. I just know I had the will to live." Her words are more powerful than any reenactment could ever be.

To compare, the Steven Spielberg produced "The Last Days" was a harrowing emotional experience, an unblinking confrontation with the monstrosity of the Nazi regime and the injustice wrought upon the Jewish people (I am still haunted by the comment from one survivor in "The Last Days": "That's when I stopped talking to God."). "The Last Days" showed, without a shadow of a doubt, the very real dangers involved in naming an entire people as "other." Once you label a whole group as less than human, as "bad people," as beyond the pale and not worthy of protection, you can punish with impunity. It's genocidal language. The Rwandan genocide unfolded in an atmosphere of violence and paranoia, with the Tutsis referred to constantly in a barrage of propaganda as "cockroaches." People may hesitate to murder another human being, but nobody feels bad about killing a cockroach. Joseph Goebbels' entire job was to make the Jews seem sub-human; they were rats, vermin, an "infestation" into the purity of German culture.

That urgency - the urgency of reminding people "this is what happens, this is what prejudice looks like in its most grotesque form" - is missing from "The Invisibles." The dual structure keeps it from cutting close to the bone. However, these are stories that need to be told. In 1942, Victor Klemperer, a Jewish man living in Dresden with his German wife, feeling the vice of Nazi terror closing in around him, declared in his journal (which was eventually published in 1998): “I shall go on writing. That is my heroism. I will bear witness, precise witness!” A film like "The Invisibles" is part of bearing "precise witness." We clearly need reminders, and constant ones, of the end result of "otherizing" an entire group of people. 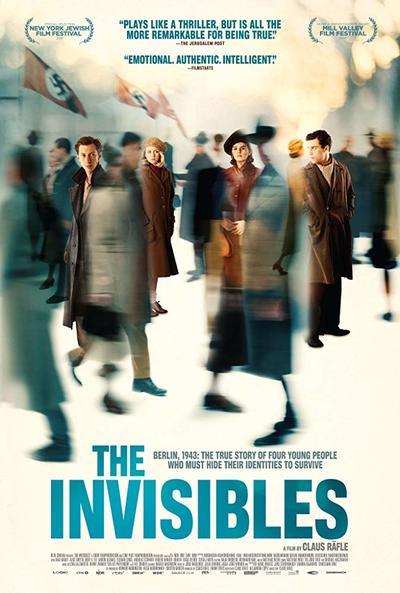