The Indian In The Cupboard

There is a word for "The Indian in the Cupboard," and that word is "creepy." The movie is about a little boy with a magic cabinet that turns plastic toys into real, living humans who are 2 or 3 inches high, and puts the boy in the god-like position of being in complete control of their worlds and their fates. This is, of course, the fantasy behind all dolls and toy soldiers and suchlike: In a child's imagination, the little figure is alive, as anyone who has heard a little girl talking to Barbie can testify. But by making the fantasy real, the movie unleashes all sorts of considerations it doesn’t really deal with, and the material edges closer to horror than it probably intends.

The boy's name is Omri (Hal Scardino), and he lives in a Manhattan townhouse with his family. For a birthday present, he's given an old wooden cupboard. Later, his friend Patrick (Rishi Bhat) gives him a small plastic Indian. His mother finds a key that fits the cupboard door. He puts the Indian in the cupboard, locks the door, and goes to bed - only to hear muffled sounds from inside the cupboard. He opens it again, and is amazed to find that the plastic figure has come alive, and is a tiny, frightened little human, backed into a corner, shouting defiantly.

The secret of the cupboard is that, in connection with the lucky key, it turns plastic into living flesh. The kid is delighted by this discovery, and is soon talking with the Indian, named Little Bear (Litefoot), who has been snatched from the year 1761, and speaks English because he has met English settlers. At first he thinks the kid is the Great Spirit, but eventually, they understand what happened, although not with as much shock and incredulity as you might expect.

The movie, directed by Frank Oz, was written by Melissa Mathison, who also wrote "E.T." (1982), and here uses some of the same ideas: A little boy hides an amazing living thing in his room, and tries to go about his daily life with this secret knowledge. Omri lets his friend in on the secret, and soon is performing neat tricks like turning a plastic teepee into a real one, so Little Bear will have a home.

Soon Little Bear has a 1:24-scale companion, a cowboy named Boone (David Keith), who also starts as a plastic toy and turns into a living miniature, snatched forward from the 19th century along with his horse. The Indian and Cowboy are at first hostile, but eventually become friends. After all, they have a lot in common.

The logic of the situation requires that adults not find out about the little figures; Omri and his friend try to deal with their secret on their own. It's a little monstrous, how they completely possess these little beings, although Omri seems to understand his responsibilities, and is always lecturing his friend: "They're alive! They're real!" That's when Patrick wants to use them more like toys than people.

The essential sadness of the story - two people jerked out of their lives and miniaturized in a kid's bedroom - underlies almost everything that happens, and is acknowledged in some of the dialogue.

And there are unhappy developments, as when the little men watch a Western on TV, and Little Bear is so enraged by the slaughter of Apaches that he shoots an arrow at Boone, almost killing him (a plastic figure of an Army medic is brought to life and comes to the rescue). There is talk of Little Bear's wife, who died of smallpox, but when the kid wants to put a plastic Indian woman in the cupboard to give Little Bear a wife, the Indian says no: "She has her own life." The movie is slow-going in its center stages, maybe because it doesn't really confront the implications of the situation. Then there's a crisis when the magic key is lost, and the Indian goes under the floorboards to find it. Since an older brother's pet rat is also loose under the floorboards, I was anticipating a battle between the tiny man and the deadly rat, as in "The Incredible Shrinking Man" (1957), but the opportunity is avoided.

"The Indian in the Cupboard" is not exhilarating or exciting or funny in the ways that "E.T." was, and although it tries for the same realism in its depiction of its children, it stumbles over the plight of its little people who become the playthings of the kid-gods. "E.T." was what he was, and dominated his scenes; Little Bear and Boone always seem to be missing something, as if they are happy to be tiny pawns in the plot of a children's story. The movie looks like a great idea, and I'm sure the TV ads will make it seem like fun, but my hunch is, kids will find this story depressing in ways they can't fully express. 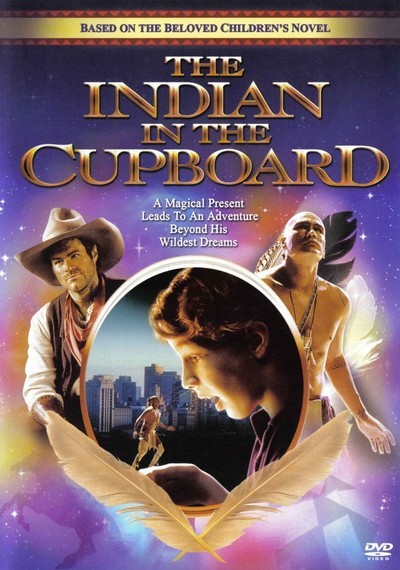