This is a terrific movie for kids and teenagers. It's a melancholy fact of the times we live in that any movie of even moderate ambition is supposed to become a blockbuster, and that "family movies," with few exceptions, are inane, innocent, and boring. But “The Incredible Shrinking Woman” is not inane, is sometimes wickedly knowing, and is only periodically boring. It strikes a note of quiet desperation that appeals to the teenager in all of us. When Lily Tomlin's character has shrunk to twenty-four inches in height and is desperately screaming for help because she is about to be flushed down the garbage disposal unit, who among us cannot say he has felt exactly the same way?

I suppose that at some basic level “The Incredible Shrinking Woman” is a protest against the lot of the housewife in American society. As Lily Tomlin slaves away in her suburban dream home, her husband (Charles Grodin) gets big raises and promotions for advertising home-care products. And eventually one of those products (was it the dye? detergent? glue?) causes Lily Tomlin to start shrinking. One of the intriguing things about the movie is that the smaller Tomlin gets, the more people treat her like a child. She even winds up living in a doll's house. I would like to argue that this is a dilemma not limited to housewives. A lot of people know this feeling. Kids can identify with the maddening sensation that they are smaller than everyone else in the world and no one is listening! Teenagers have grown accustomed to being stuck down the garbage disposal of life: Nobody wants them around, and most people would probably like to hit a switch and make them disappear.

So there's a certain poignant comedy in “The Incredible Shrinking Woman” that strikes some chords. The movie is also funny in its visual approach, showing us a suburban world in which everything is done in hideously jolly colors and everybody, even the TV anchorman, wears peach blazers. America in this movie looks like a gigantic paint-color chart.

It's too bad, I suppose, that “The Incredible Shrinking Woman” succeeds on the levels I've mentioned without ever breaking through to become a really inspired comedy. Lily Tomlin is such a funny woman that we expect her to hit home runs in every movie. She doesn't in this one, but she does something almost as hard. She creates a character that is halfway believable, in the midst of chaos. She causes us to feel a certain comic sympathy for her plight. And, for that matter, she inhabits a plight that is interesting. Most "family movies" these days are uninspired, moronic, and directed and acted without any visible style. “The Incredible Shrinking Woman” at least has an intelligence behind it. It is engaging a lot of the time and funny some of the time, especially when a gorilla helps the two-inch-tall Tomlin escape from captivity. 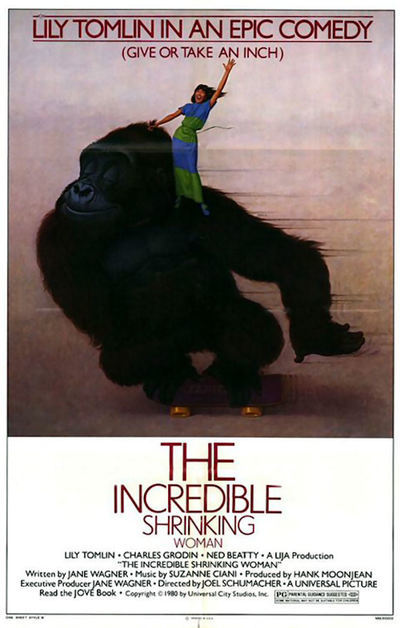