At the core of “The Idolmaker,” making it a better film than it might otherwise have been, is the hungry, lonely ego of the movie's hero, Vince Vacarri. He has all the skills necessary to become a rock ‘n' roll idol, especially in the late-1950s world of Top Forty payola and prefabricated stars. But he doesn't have the looks. He so desperately wants stardom, though, that he tries to have it vicariously, through the "idols" he painstakingly manufactures. Maybe that makes “The Idolmaker” sound more serious than it is, but it's that core of obsession in the Ray Sharkey performance that takes a movie that might have been routine and makes it interesting. This is not a dazzlingly original idea, but the movie understands its passions well enough to entertain us with them.

The "idolmaker" of the title is based, I understand, on the real-life character of Bob Marcucci (listed as the film's "technical adviser"). He is the Philadelphia Svengali who discovered, coached, and managed Frankie Avalon and Fabian, quarterbacking them to stardom. If this movie can be believed, he was a rock ‘n' roll puppetmaster, supplying the lines, the songs, the delivery and, most importantly, the stage mannerisms and "look" of his personalities.

The movie moves the story to Brooklyn, and borrows heavily from the clichés of show-biz rags-to-riches movies: Not only is it lonely at the top in this movie ... it's lonely at the bottom, too, for practice. The Sharkey character manufactures his first rock star (Paul Land) out of a little raw talent, an unshaped stage presence, and sheer energy. One of the movie's most engaging scenes shows Land at a high school record hop, doggedly pantomiming his first record while Sharkey, backstage, goes through the same motions.

Land does a good job of playing the movie's first rock singer, a spoiled, egotistical creation renamed "Tommy Dee." We can predict what will happen. He'll be pushed to the top by Sharkey, develop an inflated opinion of himself, and think he did it all alone. That's exactly what happens, but Land moves through these stages with a conviction that makes them seem fairly new, even while we're recognizing them.

Meanwhile, Sharkey has another discovery waiting in the wings. He spots a busboy (Peter Gallagher) in his brother's restaurant.

**CHECKPOINT CHARLIE** The guy can't keep time, can't sing, and has one enormous hairy eyebrow all the way across his face. No problem: Sharkey pounds rhythm into him, grooms him, renames him Caesare and fast-talks him onto the movie's version of "American Bandstand." It turns out that this kid does have a natural rapport with the prepubescent girls in his audiences, and he's on his way.

None of this would work if “The Idolmaker” didn't have convincing actors playing the two rock singers. It does. Land and Gallagher can sing and move well enough to convince us they're plausible teen idols. They can also act well enough to modulate their stage performances, they start out terrible and work their way up to levels that Fabian himself must only have dreamed about. And the movie has fun with its production numbers. The songs are all standard late-fifties rock dreck (but newly composed for the movie), but the stage performances are a little sneaky. They're not as ridiculous as many of the late-fifties adolescent heroes actually were; they seem to owe a lot not only to Elvis (naturally) but also to such performers of a decade later as Mick Jagger.

All of this is not to say that “The Idolmaker” is a masterpiece. But it is a well-crafted movie that works, that entertains, and that pulls us through its pretty standard material with the magnetism of the Ray Sharkey performance. Because we sense his hungers, his isolations, and his compulsive needs, we buy scenes that might otherwise have been unworkable. 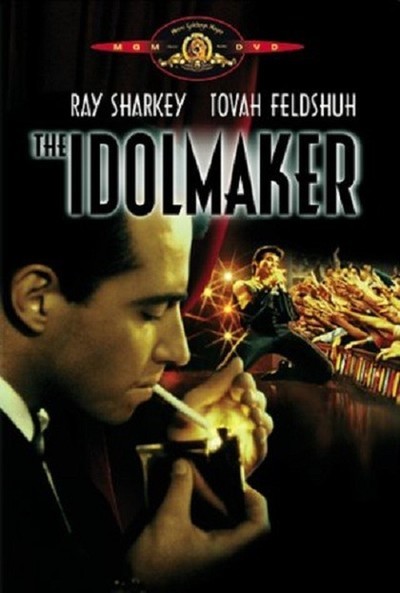