If you enjoyed the reality series “Ice Road Truckers” but thought it could use some frantic gunfire, mechanical sabotages, and intentional avalanches to heighten the degree of difficulty, you’re in luck. Now there’s “The Ice Road,” but it’s a thoroughly middling Liam Neeson actioner that’s not nearly as exciting as the above description makes it sound.

You may be wondering, as I did: “Two Liam Neeson movies in under six months? In this economy?” Yes, the grizzled star is indeed back after January’s “The Marksman.” Both require him to brandish his particular set of skills to rescue folks in danger and vanquish bad guys, but the skills aren’t nearly so sophisticated or complex anymore, and neither film comes close to the visceral thrills of a “Taken” or “The Grey.”

It’s been a long time since peak Liam Neesoning, and at this point, his gruff, imposing presence can only do so much to make a movie watchable. Despite its many perils, both natural and human, “The Ice Road” is surprisingly dull. It’s definitely not as crazy as it should have been, given the setting and the stakes. And while writer/director Jonathan Hensleigh establishes a foreboding tone with impressive, widescreen vistas of unforgiving, snowy expanses, his action sequences remain unexceptional.

Hensleigh begins with an explosion at a remote diamond mine in far northern Manitoba, Canada, which traps about two dozen men inside. While they bicker about methane levels and tap out messages on pipes to the outside world, equipment to free them slowly makes its way in their direction. Neeson’s Mike McCann is part of a three-truck convoy that must trek across treacherous ice roads—plowed pathways carved across massive frozen lakes—to reach their eventual destination. In the passenger seat is Mike’s younger brother, Gurty (Marcus Thomas), a mechanic and Iraq war veteran suffering from PTSD and aphasia. Also along for the journey are Laurence Fishburne’s Jim Goldenrod, the longtime trucker who organized this mission, and Amber Midthunder’s Tantoo, a troublemaking Native woman who’s also a daring driver. (Coincidentally, her brother is among the men trapped in the mine, so This Time, It’s Personal.) Tagging along is a city slicker corporate actuary who may have nefarious intent (Benjamin Walker, the only one who recognizes this B-movie material for what it is).

Tantoo helpfully lays out the tricky balancing act the truckers must strike in trying to traverse this hazardous stretch—in April, of all months. They can’t go too slow or too fast as they carry their heavy gear. They must look out for pressure waves ahead of them and cracks behind them, obstacles which provide a couple of legitimately tense moments here. But while that exposition is crucial, too often characters stand around explaining things to each other in “The Ice Road.” And yet, they remain barely developed and unengaging. Mike yelling “Kiss my Irish ass!” to a doctor trying to prescribe opioids to his brother is a given, not a revelation. Hensleigh bounces back and forth between the drivers and the miners, but the people we’re supposed to care about as they gasp for breath are essentially interchangeable, and it’s hard to tell who’s who since it’s so dark in there.

Whatever comes their way on this arduous adventure, Neeson remains the scowling straight man. He’s afforded few opportunities to flash any kind of charisma or menace, although he does get to throw some punches by the end. And while we understand work is scarce for his character because he’s consumed with the challenges of caring for his brother, it’s hard to imagine how he ended up in this potentially deadly, pain-in-the-ass job in the first place.

And somewhere, amid the cracking of bullets and the generically insistent score, there’s a message about corporate greed and the exploitation of Native land. But you’ll probably want to keep on truckin’. 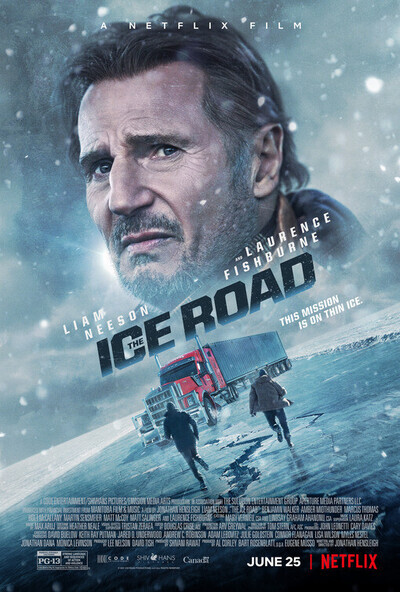 Rated PG-13 for strong language and sequences of action and violence.