If you can't make it there, it's a lot cooler here

As a topic of fiction, the only things I have against young love are youth and romance. There has to be something more. Who would care about Romeo and Juliet if it hadn't been for their unfortunate misunderstanding? There has to be comedy, or tragedy, or suspense, or personality quirks or something more than the fact that Young Person A loves Young Person B. This also applies to Old People A&B.

Ethan Hawke's "The Hottest State," which he wrote, directed and co-stars in, is based on his 1996 "semi-autobiographical" novel, and therefore inspired in some way by his similarities to his hero: Comes to New York from Texas, wants to be an actor, falls in love, etc. I would perhaps have enjoyed the movie more if it had been a "semi-biographical" novel, based on both the boy and the girl. When his hero stands in the street reciting beneath her window from "Romeo and Juliet," (and he does), surely the point is not his gauche behavior but her failure to pour water on him.

The movie involves William (Mark Webber) and Sara Garcia (Catalina Sandino Moreno, from "Maria Full of Grace"). She is a Latina from a wealthy background in Connecticut, cutting out any hope of culture clash, since Latinas will not have been unknown to him in Texas, although at least her background provides her with an interesting mother (Sonia Braga). William, we learn in flashbacks, is himself the product of young love that did not end well, between a distant father (played by Hawke) and a mother (Laura Linney), whose realistic advice could be borrowed from Olympia Dukakis in "Moonstruck" (in place of sympathizing with William, she reminds him that in the long run, he will be dead and his heartbreak won't matter so much).

William and Sara meet in a bar, like each other, find out they're both in the arts, and play at boyfriend and girlfriend. Then they take a vacation to Mexico, seem to fall truly in love, finally have sex and then when they meet next in New York, she has decided she doesn't want him, or anyone, as a lover. Which breaks his heart and causes him to paste grieving messages on his windows, which she can see from hers. (Romantic tip: When a lover tells you they don't want to see you "or anyone," they already have someone else in mind.)

If the stakes were higher, all of this might matter more. But William and Sara have not interested us as themselves and don't seem to interest each other as much as they like the romantic roles they're playing. Will the world be different, or their lives irrevocably changed, if they break up? I don't think so. Their tree falls in the forest, and nobody cares except the termites.

I admired Hawke's directorial debut, "Chelsea Walls" (2001), ever so much more than this movie because it was about more interesting people and more interesting love; it was set in the Chelsea Hotel, which, when people get beyond a certain threshold of "interesting," may be the only hotel in New York that will accept them.

In "The Hottest State," Hawke uses fairly standard childhood motivations for his unhappiness and reveals too little real interest in the Sara character. Why did she seem to fall in love and then announce she didn't want to see him anymore? From her point of view, I mean. In fact, the best angle on this whole story might be from her point of view. 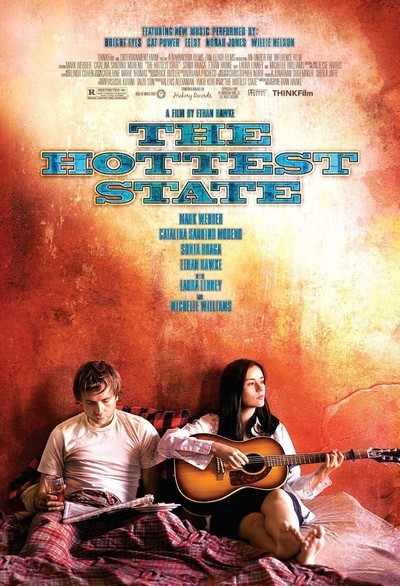