Sierra Burgess is a Loser

A tired comparison for an aggravating humdinger like “Sierra Burgess is a Loser” is the story of “Cyrano de Bergerac,” referring to a guy who thought he was too ugly to talk to his crush, so he did it by assuming someone else's identity. But a wired comparison is “Catfish,” an MTV show and verb that involves people creating fake online presences in manipulate a sucker into loving you. There’s plenty to explore about people who hide their true selves behind text and decoys, but “Sierra Burgess is a Loser” is dumber and more desperate than any episode of “Catfish,” even the one where a guy thought he was dating Katy Perry for five years.

This project, the latest teenie slumber party-ready joint from Netflix, is a stellar example of a perfectly fine character mismatched with the wrong movie. Awkward high schooler Sierra (played by Shannon Purser of “Stranger Things”), is established from the beginning as the Hughesian underdog, likable for her hip taste and sharp mind, able to quote literary references with her author father. But this script needs a story, so it makes her do things outside her logic, like pretend to be someone else when a random cute boy named Jamey (Noah Centineo) texts her. He thinks he’s talking to someone else, but Sierra leans into it, for the attention, the affection, the fulfillment of someone talking to her that she thinks wouldn't look at her in real life.

But who gave Sierra’s number to the perfect Jamey? That would be Veronica (Kristine Froseth), who touts a Trumpian mythology with her small group of fellow popular girls that only losers hang out with losers. She, being a self-proclaimed winner due to her status and looks, gives Jamey Sierra’s number when she sees that Jamey hangs out with a couple of unsavory people. But when Jamey texts the number, and Sierra decides to go with it by catfishing him, Veronica is looped into this mess. The two young women end up bonding over their warped catfish scheme.

Stop right there: Anyone who knows about the existence of previous Netflix film “To All the Boys I’ve Loved Before" knows that Noah Centineo is currently Teen Movie King, his soft-spoken, unimposing handsomeness the latest fixation of numerous blog posts. But this movie has to sell that someone like Veronica would be not just uninterested, but repulsed by Jamey, so much as to give him a fake number and then help Sierra talk to him as payment for Sierra’s tutoring. Even the timing of this movie is bad.

Things get much worse, like the scene when Sierra pretends to be deaf when she stumbles onto Jamey in real-life (with his brother, who is actually deaf), or when Veronica starts to realize that maybe after spending time as Sierra's in-person decoy, she likes Jamey, too. But the overzealousness of Lindsey Beer's script to honor every expected conflict just makes one even more aware of their impending resolutions, minimizing the desired cuteness of having a clumsy romance blossom.

This all might pass the time if the story weren’t directed with such disdain by Ian Samuels, who offers one of the most uninspired visions of modern high school life in years. For a movie that largely consists of chemistry being built over text messages, it appears those visuals aren’t in the budget—indeed, an episode of “Catfish” has more zip when it comes to showing the emojis and careful expressions of each nervous text.

"Sierra Burgess is a Loser" is from the school of slathering generic pop songs on scenes to add a warmth, and this movie has a cache of '80s-sounding synth ballads that all sound the same. And while the story wants to be true to how high schoolers interact, it has scant imagination, lazily placing Sierra and her friend Dan (RJ Cyler) in different activities as they talk, like running track or playing in band—the latter being Sierra’s most teeth-gnashing moment. Only losers talk through rehearsal! 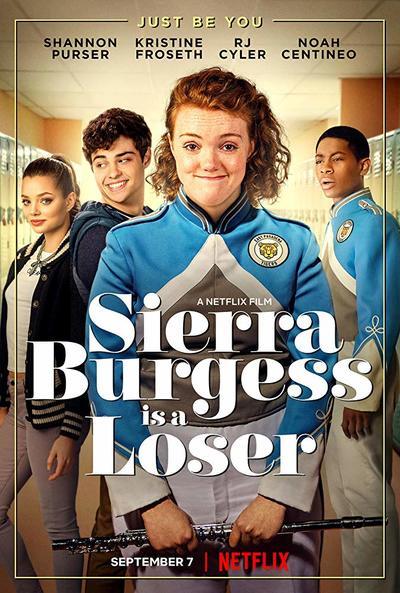