Throughout his illustrious career, Sean Penn has only rarely ever taken a starring role in a straightforward genre piece aimed squarely at the multiplex crowd. He has never really taken on a role that required him to be a two-fisted, gun-toting hero in a traditional action film narrative. Since his latest film, "The Gunman," requires him to delve into both of those relatively unfamiliar areas, there are some moviegoers out there who may be curious to see what it is about this particular project that piqued his interest, not only as the star but as a producer and co-writer of the screenplay to boot. Unfortunately for them, his motivations will seem just as murky after the end credits have rolled because this is the kind of throughly anonymous and undistinguished film that barely would have passed muster as a mid-2000s DTV project top-lining a third-tier TV star. It lurches from one banal scene after another before settling into a third act that forces Penn to appear in some of the silliest scenes of his career —and when I say that, bear in mind that I once paid cash to see "Shanghai Surprise" during its brief theatrical release.

This tale of international intrigue, for lack of a better term, begins in 2006 in the Democratic Republic of Congo, where Jack Terrier (Penn) is a former Special Forces soldier working as a security advisor for a mining company. With a small group of associates, he moonlights doing the kind of shadowy covert jobs that corporations will pay big money to have done off the books. His latest mission finds him assassinating the country's powerful minister of mining. When the deed is done, Terrier is forced to flee the country, leaving behind his far nobler aid worker girlfriend Annie (Jasmine Trinca) behind without a world of explanation, as civil war breaks out throughout the land as the result of his actions. Eight years later, a newly ennobled Terrier has returned to the Congo to legitimately help the locals by digging wells for an NGO in between officially verboten surfing jaunts. When he is attacked by three thugs who have been sent to kill him—and to bring back 50 cc's of genetic proof of his demise—he begins to surmise that his long-buried past has come back to haunt him and then some.

After the ambush, Terrier flies to London to begin investigating who might want him dead by looking up his former comrades to see if they might have any information. While a couple are dead and one, Stanley (Ray Winstone), is content to drink his days away, others have prospered—Cox (Mark Rylance) is now a top executive at the company that contracted them for that fateful job and Felix (Javier Bardem) is not only a high-powered Barcelona-based businessman with vague notions of corporate philanthropy, he is also now Annie's husband. From there, the action shifts to Spain and Gibraltar as Terrier dodges any number of setups and shootouts in order to uncover the truth leading to a climactic game of cat-and-mouse set amidst a bullfight in Barcelona—odd, since Barcelona officially banned the sport as of 2012. If all off that wasn't complicated enough, Terrier is also suffering from brain trauma resulting from his former life that currently affects his memory and which threatens to incapacitate him further if he doesn't stop the derring-do and take it easy.

Based on the 1981 pulp novel by Jean-Patrick Manchette with the admittedly awesome title of "The Prone Gunman," "The Gunman" is, at least for the first two-thirds, rudimentary beyond belief. The action scenes are executed by director Pierre Morel with none of the grace and style that he brought to the big set-pieces in such previous efforts as "District B13" and "Taken." Unlike those beautifully orchestrated ballets of brutality, the fights here have the lets-get-this-done feel of a television series that has fallen a day or two behind in its shooting schedule. To fill in the blanks between the shootings, stabbings and beatings, co-writers Penn, Don MacPherson and Pete Travis offer up a boilerplate narrative in which the motivations and actions of all the key characters can pretty much be figured out within the first couple of reels, leading to an unavoidable sense of dramatic wheel-spinning, and the occasional attempts at adding a sense of political awareness to what is otherwise an unabashedly pulpy storyline are more off-putting than engrossing.

The final stretch of the film, however, goes off the rails with a series of narrative choices that boggle the mind. One involves the sudden appearance of Idris Elba as an Interpol agent of a seemingly ambiguous nature who offers Terrier some clandestine assistance in his quest. That is okay, but what makes the scene so absurd is that he presents his offer in such a willfully obscure manner—there is an extended and none-too-clear metaphor about a treehouse—that it begins to feel like a scene straight out of "Top Secret!" instead of a theoretically serious drama. Even sillier is the big climax at the bullfight in which people are running around the crowded arena waving their guns willy-nilly without anyone noticing, a tortured visual link between Terrier and the bull is awkwardly established, and bad guys are eliminated in ways so goofy that I found it hard to believe that anyone involved with this project could have thought that they could have worked dramatically.

For Penn, "The Gunman" is a cross between a vanity project and an apparent attempt to reinvent his career in the same manner that Liam Neeson did under Morel's guidance in "Taken." Penn has delivered the occasionally awful acting turn over the years (as anyone who saw "I Am Sam," "All the King's Men" and "Gangster Squad" can attest) but he at least committed to them, which is more than one can say for the listless performance he gives here. He is certainly fit enough to take on an action hero persona—between the surfing scenes and the numerous moments where he takes off his shirt to show off his ripped arms, the film give us as many trips to the gun show as it does gun battles—but two-fisted ass-kicker is just not a persona that suits him. From a screenwriting perspective, the by-the-numbers approach is even more bewildering—how could the same guy who wrote and directed a film as fascinating and morally complex as "The Pledge" (which is one of the best films of the 2000's that you have probably never seen) come up with something this simplistic and think that it was worth doing?

"The Gunman" isn't the worst action film that you will see this year—you will be lucky if you remember anything about it a couple of weeks after seeing it—but in its waste of a gifted cast (good actors like Bardem, Rylance, Winstone, Elba and Trinca have been brought together and then given nothing of interest to do), a normally effective choreographer of cinematic chaos and a potentially provocative premise, it will probably go down as one of the more dispiriting ones. This isn't to say that Penn could not one day make for an effective and believable action star—he is still one of our best actors and a gifted filmmaker to boot. However, after this misfire, I guess, to steal a phrase from "The Spanish Prisoner," it is back to the range for him. 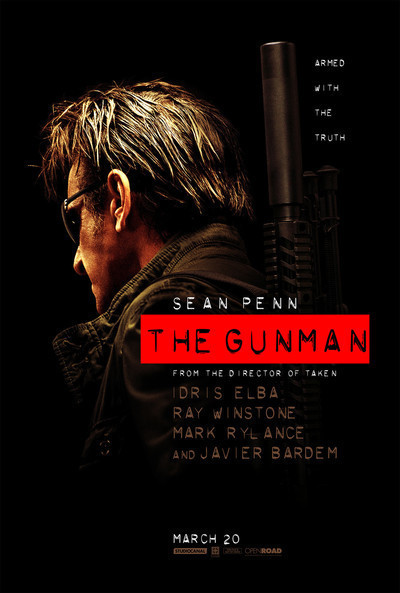