Light snow, misty fog, and falling ash blend in the opening scenes of David Lowery’s magnificent “The Green Knight,” setting a surreal tone for what’s to come. You can feel the chill and smell the air. Immediately, you feel outside yourself, far from daily concerns, set for an experience that's unlike anything else in nearby theaters. That feeling won't subside for over two hours.

Lowery has adapted the 14th century chivalric romance Sir Gawain and the Green Knight into one of the most memorable films of the year, a fascinating swirl of masculinity, temptation, heroism, and religion. Arthurian experts may quibble with some of Lowery’s decisions and it is certainly a film that challenges traditional expectations of stories about heroic knights for modern audiences, but fans will be drawn to this mesmerizing journey guided by Lowery’s incredibly poetic eye, career-best work from Dev Patel, and an artistic sensibility that transports audiences to another world. It’s a film that embeds the concept of storytelling and performance into its narrative—whether it’s a King asking for a heroic tale or children watching a puppet show—while also weaving its own enchanting spell on audiences. More than any movie in a long time, I would have immediately watched it again, but it’s also a film that really strengthens in memory, swirling around your brain like the falling flakes of the opening scenes.

Sir Gawain (Dev Patel) is the nephew of King Arthur (Sean Harris) and Queen Guinevere (Kate Dickie), and the son of Morgan Le Fay (Sarita Choudhury), accused by some in the village of witchcraft. After a brief opening scene with his lover (Alicia Vikander) and mother, Gawain is off to a lavish Christmas banquet with the King and Queen, at which he is surprised to be asked to sit by their side. Arthur speaks to him of taking young Gawain for granted, and immediately Patel conveys depth with his striking eyes, relaying both the emotional pride that comes with finally feeling seen. (He does so much throughout the film in terms of physical performance, using his eyes and body to find emotion without dialogue.) Long, deliberately slow exchanges between Gawain and Arthur set the tone: This is not an action film. Arthur asks to hear a tale.

One unfolds in front of their eyes. The doors to the hall burst open and the Green Knight (Ralph Ineson) enters. Half-man, half-tree, he casts an imposing figure, and he wants to play “The Christmas Game.” He offers a deal. He challenges any of Arthur’s knights to strike him. If they can, the knight will get his imposing weapon in exchange. But there’s a cost. A year hence, the knight must come to the Green Chapel, where the Green Knight will return the exact strike given him a year earlier. Gawain steps forward, and despite being reminded that this is a game by Arthur, beheads the Green Knight. The mythical creature picks up his head, which doesn’t seem too concerned about its detachment, and laughs as it rides off. Gawain is about to have a long year.

This is all really prologue to “The Green Knight,” the bulk of which consists of Sir Gawain’s journey to the Green Chapel to meet his fate. Along the way, he meets a scavenger played by Barry Keoghan, a mysterious young woman played by Erin Kellyman, and a Lord played by Joel Edgerton. Lowery’s script deftly matches the poetic structure of its source, circling back to themes like the rhyming structure of a poem, and unfolding his story in what almost feel like cinematic stanzas that repeat and comment on each other. Gawain’s journey becomes a spiral, feeling more and more like a dream, as if he never really left that banquet with the Green Knight to begin with, and the film gains momentum through a cumulative sense of disorientation. It becomes not so much a story of a physical journey but a mental and emotional one, a series of challenges before a young man faces his ultimate fate.

With its loose storytelling structure, the tech elements of “The Green Knight” become even more essential to its success. Lowery has brought his remarkable team, including regular composer Daniel Hart and cinematographer Andrew Droz Palermo. (He edits the film himself, and reportedly re-cut it dramatically from the version that was supposed to premiere at SXSW in March of 2020.) The fluid cinematography alternates between dreamlike and something deeply connected to Mother Nature. “The Green Knight” is about many things—and some of the best film writing of this year will unpack its themes in more depth—but a sense of man’s relatively minor role in the grand scope of history and nature is essential, and Palermo beautifully captures the lush greens of the world around Gawain, as if the Knight himself is already everywhere. Vikander gets a phenomenal speech about how much we all return to the earth and Gawain is constantly being reminded of his insignificance and fragility. If The Green Knight doesn’t get him, something else will.

While it may be his most ambitious film, Lowery has played with complex themes before in projects like “A Ghost Story,” and this reflects that film’s questioning of meaning in the relatively small window of a human existence. Once again, Lowery leaves just enough open to interpretation and yet never lacks in confidence. That’s the incredibly fine line that great films often walk—when a work can feel both assured in the voices of its creators and yet open enough to spark conversation. “The Green Knight” is one of those films. One never questions that Lowery knows exactly what he’s doing, and yet people will walk away with very different readings of “The Green Knight.” Again, that’s akin to a great poem that means something unique to each person that reads it, and some of those readings may even surprise the original author.

“The Green Knight” asks a lot of its viewers—to stay engaged with what could be called its slow pace, to consider its themes without them being underlined for easy consumption, to be willing to see a film about famous knight that contains very little in the way of traditional heroism. It is scary, sexy, and strange in ways that American films are rarely allowed to be, culminating in a sequence that cast the whole film in a new light for this viewer. We're all just sitting in that banquet hall, listening to the story requested by King Arthur, told by a master storyteller. 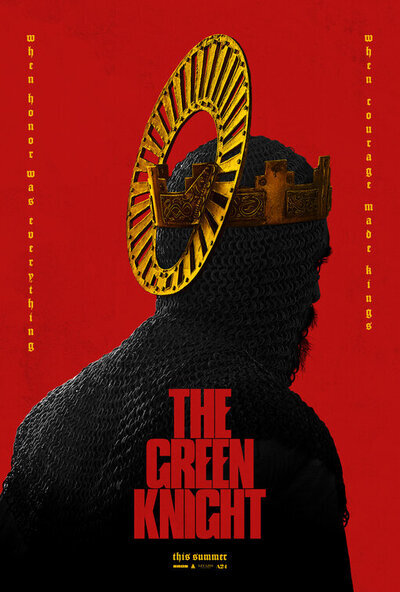