If you—or, more likely, someone you love, but I shouldn’t presume in any event—are in the market for an effective Young Adult tearjerker, “The Great Gilly Hopkins” will get the job done. Directed by Stephen Herek from David Paterson’s adaptation of Katherine Paterson’s YA novel, “The Great Gilly Hopkins” is a spectacularly foursquare “family is what you make it” redemption story. The kind of thing that film critics like to dismiss as “looking like a made-for-TV movie,” as if that comparison/analogy even holds as a dismissal anymore.

Which is not to say that the movie as it stands has any real cinematic distinction. Director Herek brings his “Mr. Holland’s Opus” game here, but if you’ve spent any time with the filmmaker’s body of work, you already know that his “Bill & Ted’s Excellent Adventure” game is not appreciably edgier. The man knows how to lay out whatever he’s called upon to lay out. That is, coherently. For any emotional content he leaves things to his actors.

He’s got a good bunch of them here. Canadian teen actor Sophie Nélisse plays the title role, a young girl in foster care who we know is not terribly well-off emotionally because her hair is so flat. Her attitude stinks, too. Dropped off by a child services worker at the house of beaming kindly Christian Maime Trotter (Kathy Bates in milk-of-human-kindness mode), Gilly behaves in such an immediately insufferable fashion that you’re practically rooting for her to get kicked out on to the street. (Or for Bates to get some of her Annie Wilkes mojo back.) Gilly terrifies the emotionally damaged little boy who’s also living in the ramshackle but warm-hearted house. She literally steals from the blind man living across the street, a kindly fellow played beautifully by Bill Cobbs. The movie, naturally, wants to have things both ways, so Gilly is also depicted as having terrific pluck—she’s pretty badass with the male bullies at her school, too.

And of course, behind all this is the revelation that she ain’t no delinquent, she’s misunderstood. All Gilly really wants is a real family life with her mom, who abandoned her as an infant and whose life she imagines as spectacularly glamorous. (That said mom is played by Julia Stiles, giving this critic the first strong “Man, am I old” shiver that he’s had at a screening since, well, forever.) This excuse did not, for this viewer, contain as much water as it was intended to. For instance, Gilly finds herself doing better in school than she intended—her strategy has been to get kicked out of every situation in which she’s been placed, the better to free herself for Mom Pursuit—and so decides to alienate her African-American schoolteacher (Octavia Spencer) by PRETENDING to be racist. The thing about pretend racism is that, in order to pull it off (imagining that you would want to, of course), you have to say and/or do actual racist things, which are ugly and hard to forgive. I suppose this plot point is indicative of a desire to make contemporary family/redemption tales more relevant/realistic/pertinent, but I found the whole episode just plain ugly, despite the teacher’s humane reaction and Spencer’s as-ever expert depiction of it.

Gilly is found out, in a sense, just as she’s beginning to appreciate the good thing she’s got in Trotter and the kid and the nice blind man and all. And then along comes the Third Act Glenn Close Surprise Plot Twist. A monkey wrench is once more thrown into Gilly’s schemes, and a final confrontation with Pursued Mom ensues—Stiles shows up so fleetingly that one is surprised she doesn’t split by saying, “Sorry, I’ve got another Bourne movie to get to.” Still, the climax gets its redemptive job done. And Gilly gets a very becoming new hairstyle in the bargain.

Did I find myself getting a little choked up by the end? I did. It’s a great cast that knows its business. If it can get someone who’s so out of its core demographic a little verklempt, imagine what it can do for someone who’s a target for such fare. Arrange your moviegoing weekend accordingly. 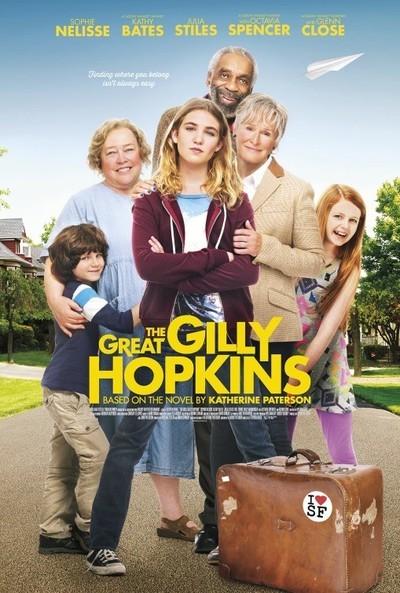 Writer (based upon the novel)