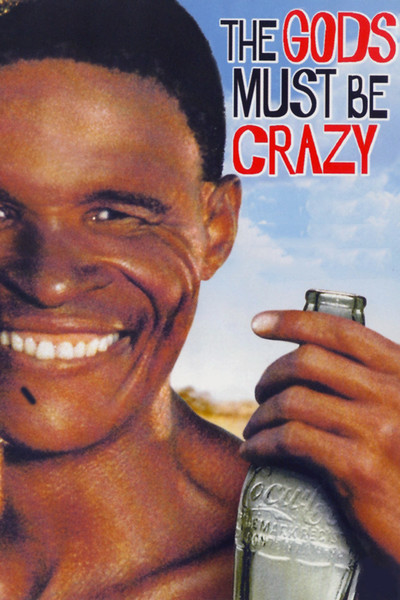 Here's a movie that begins with a Coke bottle falling from the heavens, and ends with a Jeep up in a tree. “The Gods Must Be Crazy” is a South African movie that arrived in Europe with little fanfare in 1982, broke box-office records in Japan and South America and all over Europe, and even became a cult hit here in North America, where there has not been much of a demand for comedies from South Africa.

The film begins in the Kalahari Desert. A pilot in a private plane throws his empty Coke bottle out of the window. It lands near a Bushman who is on a hunting expedition. He has never seen anything like it before. He takes it back to his tribe, where it is put to dozens of uses: It becomes a musical instrument, a patternmaker, a fire starter, a cooking utensil, and, most of all, an object of bitter controversy. Everybody in the tribe ends up fighting over the bottle, and so the Bushman, played by the Xhosa actor N!xau (the exclamation point represents a click), decides there is only one thing to do: He must return the bottle to the gods. This decision sends him on a long odyssey toward more settled lands on the edges of the desert, where the movie develops into a somewhat more conventional comedy.

We meet some of the new characters: A would-be schoolteacher, a goofy biologist, and an insurgent leader. They are all intent on their own lives and plans, but in one way or another, the Xhosa and his Coke bottle bring them together into unexpected combinations. And the director, Jamie Uys, has the patience to develop some really elaborate sight gags, which require a lot of preparation but pay off with big laughs particularly the sequence with an indecisive, back-and-forth Jeep.

The star of the movie is N!xau, who is so forthright and cheerful and sensible that his very presence makes some of the gags pay off. In any slapstick comedy, the gags must rest on a solid basis of logic: It's not funny to watch people being ridiculous, but it is funny to watch people doing the next logical thing, and turning out to be ridiculous. N!xau, because he approaches Western society without preconceptions, and bases all of his actions on logical conclusions, brings into relief a lot of the little tics and assumptions of everyday life. I think that reveals the thought that went into this movie: It might be easy to make a farce about screwball happenings in the desert, but it's a lot harder to create a funny interaction between nature and human nature. This movie's a nice little treasure.

The Gods Must Be Crazy II