If you were a girl growing up in the early ‘80s in Los Angeles—and probably lots of other parts of the country—there was no band cooler than The Go-Go’s. From “We Got the Beat” and “Our Lips Are Sealed” to “How Much More” and “Lust to Love,” their songs had a playful, pop-punk vibe with the perfect sprinkling of surf guitar. The quintet was retro yet totally current at the same time, and—as original MTV VJ Martha Quinn astutely points out in the “The Go-Go’s” documentary airing on Showtime this weekend—they were an ideal fit for the burgeoning music video channel. Driving around in a vintage convertible, splashing in a Beverly Hills fountain in the sunshine, they made you want to hang out with them AND be them. They were totally stylish while giving off an air that they didn’t care what anyone thought.

The Go-Go’s also happened to be the first all-female band to write their own songs, play their own instruments and see their debut, 1981’s Beauty and the Beat, go to No. 1. (This was also the first album I bought with my own money, having walked down to the Wherehouse Music store on Ventura Boulevard in the San Fernando Valley with my childhood friend, Jenny, and her older sister when I was nine years old. I felt very grown up cradling that album in my arms, with its slightly naughty, pink-and-blue cover depicting the five women wearing nothing but fluffy bath towels and creamy facial masks.)

But as we learn from director Alison Ellwood’s entertaining and richly sourced documentary, they did care what people thought. They had no choice—they were women in the music business. And while Belinda Carlisle, Jane Wiedlin, Charlotte Caffey, Gina Schock, and Kathy Valentine tried to remain true to themselves and each other as long as they could, archival footage and new interviews reveal that even being groundbreaking bad-asses didn’t insulate them from the tried-and-true highs and lows of rock superstardom.

Ellwood’s film does follow a familiar trajectory: the meteoric rise, the drugs and booze, the egos and pressures and, finally, the fight over money and credit that tore them apart in 1985 after just three albums. But what makes this documentary feel specific and alive is the way she vividly takes us back to the early days, letting The Go-Go’s reminisce about their beginnings and tell their own stories: who met who at which punk show, who brought actual musicianship and who was learning on the job. Wiedlin, the saucer-eyed, baby-voiced singer/songwriter and guitarist, speaks candidly about her lifelong battle with depression, her suicide attempt at 15, and how playing music saved her life. Carlisle, the kittenish lead singer who went on to the biggest solo career, recalls growing up poor as the eldest of seven kids, and how her perky, cheerleader exterior disguised her inner punk-rock rage. Guitarist and keyboardist Caffey, who also wrote many of their hits, talks frankly about the raging heroin habit she successfully hid for years.

But a unifying theme in both the old footage and new discussions is the pride these women felt as trailblazers, even as they insist they weren’t feminists, per se. They were just talented and hardworking, and they happened to be women. But as is so often the case with stratospheric rock glory, The Go-Go’s soon found the authenticity and energy that made them so singular being crushed, glossed, and packaged within the industry machinery. Having all five of them (as well as the band’s two former members, Margot Olavarria and Elissa Bello) look directly into the camera, unearth their regrets and open their hearts is bracing in a way that goes beyond those old “Behind the Music” episodes on VH1. They’ve gained wisdom and perspective over the past few decades, as well as a wicked and profane sense of humor. And yet Schock, who raised the band to a whole new level with her drumming, still gets choked up all these years later recalling how it felt to be sidelined. And Valentine, a guitarist who taught herself to play bass over a three-day cocaine binge because she wanted to be a part of The Go-Go’s so badly, gets lost in the memory of feeling at sea once the band broke up, as if it had happened yesterday.

All these moments, combined with a wealth of black-and-white photos and raw performance clips over the years, give us a full picture of a specific place and time in music history—which is why the rushed ending seems so abrupt and jarring. We see all five women reunite to work on a new song and perform together, and it feels like there’s a chapter missing. So many questions arise, especially given what a loyal and joyful sisterhood they’d forged and what an acrimonious split they suffered. It’s cool to see them back on stage at the Whisky a Go Go, the legendary Sunset Strip music venue where they opened for groups like Madness and The Specials, but who initiated that reunion? How awkward was that? And what’s happening in their lives now?

“The Go-Go’s”—and The Go-Go’s—are both such a blast that they ultimately make you long for more. 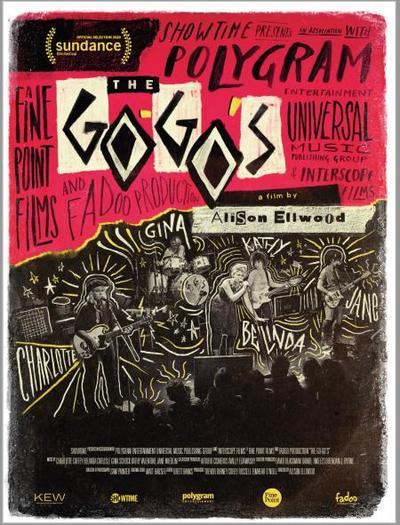 Charlotte Caffey as Herself

Belinda Carlisle as Herself

Gina Schock as Herself

Kathy Valentine as Herself

Jane Wiedlin as Herself