The Girl with All the Gifts

In many ways, Melanie (Sennia Nanua) is just another ordinary girl. She goes to school every day, where she’s grown affection for her teacher Ms. Justineau (Gemma Arterton). And she’s at that age where she’s figuring out what’s important to her, and how to navigate through the world of adults around her. But Melanie is not an ordinary girl. She will soon be a mindless, soulless zombie, a braindead creature who responds only to a desire to kill and eat people around her. In fact, with the right triggers—like if the adults around her forget to wear their scent-disguising lotion—she could become that right now. Just when you thought the zombie genre was out of ideas, along comes Colm McCarthy’s smart and engaging “The Girl with All the Gifts,” a film with echoes of George A. Romero, Danny Boyle, and Robert Kirkman but one that also feels confidently its own creation, a unique take on responsibility, adulthood, and a new chapter in evolution.

Melanie isn’t alone. She lives with a number of other zombie-children like her in a bunker beneath a military facility, where she’s being studied and experimented on by Dr. Caroline Caldwell (Glenn Close), in the hope that they could provide the antidote for what has essentially ended normal human existence. Melanie is one of several second-generation flesh-eaters called “hungries,” babies who literally ate their way out of their parents but are not behaving in precisely the same way as the brain-dead speedsters that have destroyed humanity. Whenever a child is found in the wild, they’re taken to this facility, where Dr. Caldwell can experiment on them and Sgt. Eddie Parks (Paddy Considine) can work to control them. Said control involves leg, arm and head restraints whenever the children are anywhere near that oh-so-enticing human flesh.

But Melanie seems so normal and is clearly learning empathy. The good doctor sees that as well, and even starts to loosen some of the restraints keeping Melanie more of an object than a person. Then one day Dr. Caldwell comes for Melanie, ready to dissect her and see exactly what she can learn from this unique child the hard way. Before Dr. Justineau can save her, all hell breaks loose and the facility is overrun. A small group of survivors is forced to travel to another sanctuary city in the hope that it’s still being run by people who don’t eat flesh. Melanie goes with them, and proves to be pretty useful.

One of the major strengths of “The Girl with All the Gifts” is evident early in McCarthy’s tactile, believable world-building. Much as Romero paid close attention to such details, the set design, costumes, and the world of “Gifts” feels lived-in and genuine. And it’s a nature-based aesthetic (dirt on walls, costumes that look worn, etc.) that continues and even strengthens once this ragtag crew is forced from safety and into the dangerous world. There’s a visceral, emotional impact to the horror and action of “The Girl with All the Gifts” that resonates because the characters and the world they live in feels real to us. It’s hard to overstate how important this to a horror movie, especially one set in a post-apocalyptic world. If we don’t believe the world is genuine, we won’t care what happens in it.

Of course, performance goes a long way to amplify this believability as well, and it’s not often you see a horror film with a cast this strong. Close could have gone showy with her doctor with a heart of ice but she plays it straight, again conveying the believability of the moment more than the B-movie archetype this character could have become. Considine and Arterton perfectly convey authority and warmth, respectively, although they’re good enough to make these people into more than mere plot devices. And Nanua is a find, again never giving her performance with a knowing wink. So she’s a zombie child who could be the evolutionary key to the future—this just happens to be her reality.

The traveling band aspect of “The Walking Dead,” the cities and landscapes empty of human existence of “28 Days Later,” the military aspect of “Day of the Dead”—it’s easy to pick apart the influences of “The Girl with All the Gifts.” But just as Melanie marks something altogether new in this world—a zombie with a conscience—the film about her feels inspired by what came before but also good enough to inspire those that come after. 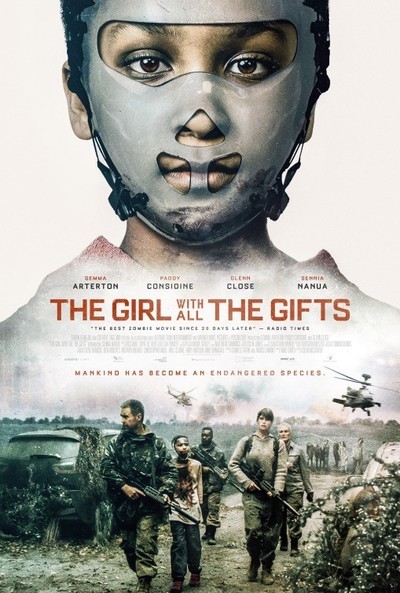 Rated R for disturbing violence/bloody images, and for language.