This enigmatic, poetic film, co-directed by brothers Ramon and Silvan Zürcher, instils intimations of the cosmic into a deliberately ordinary narrative frame. The story of “The Girl and the Spider,” such as it is, tackles nothing more or less banal than moving day—or to be entirely specific, moving days, as the action stretches over 48 hours.

The clean, cool cinematography by Alexander Haßkerl introduces us to Mara (Henriette Confurius) standing in the middle of an unfurnished room as activity bustles around her. She has an enigmatic look on her face, and there’s a cold sore on her upper lip. An older woman in the apartment is more blunt about the blemish. “You’ll catch her herpes,” she says to Lisa, another young woman, who we soon learn is the older woman’s daughter. Lisa is moving to a new flat. Mara, her soon to be ex-roommate, is supposed to be helping. But she’s not up to much. Soon she’ll find a very picturesque spider in the new flat’s bathroom, which also has some mold issues.

Mara, Lisa, and Astrid, the mom, form a mini-solar system of alienating attitudes. Under Mara’s passive expression there seems to be a roiling sea of rage concerning her abandonment. Lisa sometimes seems to be toying with Mara in a quiet, smug way. And Astrid is just plain hostile.

Or so it looked to me. This Swiss-produced film traffics in a point of view that toggles between neutrality and mystification. As the move continues, other narratives thread their way in. Narratives told by characters, narratives depicted on screen, narratives unspooled in dreams. There’s a story of an old woman and a cat. There’s talk of the piano that Lisa is not moving out of the house she shared with Mara and a couple of other roomies.

Sometimes the reality of what’s on screen shifts in peculiar ways. There’s a long overnight scene in which the beginnings of a sexual encounter are interrupted by a naked woman wearing a scary futuristic motorcycle helmet; this is followed by a lightning storm that abates almost as soon as it’s terrifyingly begun.

As ordinary as the characters look, they behave in hair-rising ways, but they do so quietly. Here’s how Mara deals with what she takes to be the advances of one male character. “I don’t like you,” she says. Noticing a buzzing fly, she says “Maybe the fly likes you.” She lets that sink in. “I am going to kill it now.” And so she swats it, with accuracy beyond normal human ken. She looks up at the fellow she’s been talking to again. “Now no one likes you.”

Moments such as this, and the conclusion of the chambermaid tale, which itself ends the movie, suggest the droll and sometimes mordant surrealism of Swedish director Roy Andersson. He’s a director whose movies I admire more than like. I felt similarly here. My own taste runs to different modes of poetic cinema, but I credit “The Girl and the Spider” for the seemingly paradoxical clarity of its mysterious vision. 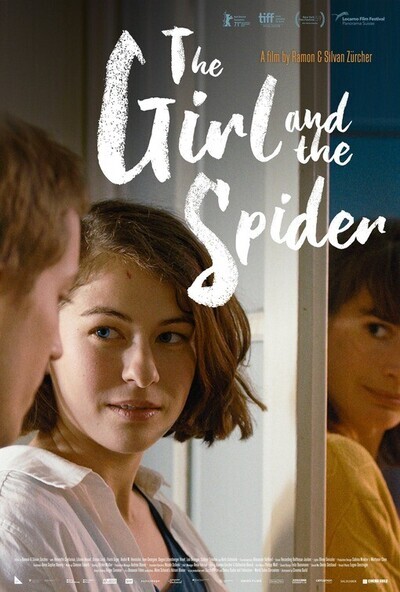