In the early 1930s, a bunch of people yearning for isolation and self-sufficiency, and looking to flee the oncoming war in Europe, moved to the remote Galapagos Islands. The kind of people who want isolation are often those who cannot "play well with others", and one cluster of German ex-pats, living on the island of Floreana, 60 miles from the nearest island in the chain, broke out into an out-and-out war with one another, resulting in a couple of mysterious disappearances and deaths (unsolved to this day). "Galapagos Affair: Satan Came to Eden," a new documentary directed by Daniel Geller and Dayna Goldfine, tells this mostly-forgotten story. It's fascinating stuff, and while the documentary is bogged down with too much information (it feels like two films shoehorned into one), that murder-mystery from the 1930s draws us in, especially when you see all the home-movie footage of the original players in this strange island melodrama.

In 1929, Berlin doctor Friedrich Ritter, disenchanted with modern civilization, and obsessed with the works of Nietzsche, pulled up stakes and moved to the Galapagos Islands with his admiring acolyte Dore Strauch. Hell is definitely other people, and there were already rumblings of trouble in their high-flung mission. Strauch had multiple sclerosis, and Ritter treated her condition as an annoyance, and seemed to feel she was slacking in her hard labor duties. Ritter wrote home letters to his family complaining about Dore, saying, "I cannot relax the sternness of her education." Ritter was a humorless bore.

Over the course of the next couple of years, two other groups of people arrived on Floreana, setting up camp, all of whom were greeted with varying degrees of hostility by Ritter and Strauch. There were the Wittmers, a German couple, who had read Ritter's articles about the Galapagos Islands and followed in his footsteps. (Note to Ritter: Do not advertise your glorious isolated paradise if you want to keep it to yourself!) After the Wittmers showed up, a flamboyant woman swooped onto the island, seemingly from out of nowhere, trailing two young men behind her, calling herself the "Baroness Eloise von Wagner Bosquet". She was supposedly a millionaire, she said stuff like, "The man isn't born who can resist me," and she wanted to build a "grand hotel" on the island of Floreana. It was rumored that the Baroness and the two men with her all slept in the same bed.

There is a lot of first-hand material read in voiceover, letters, journal entries, all of the players gossiping viciously about one another, with Cate Blanchett leading the cast as the voice of "Dore Strauch". The filmmakers chose to also delve into the social history of the Galapagos Islands, interviewing many current inhabitants, exploring what it means to live in such an isolated outpost. Fascinating stories though these may be, they lack the narrative thrust of that historical murder-mystery, with its sexual intrigue and mythical "Baroness" and Nietzsche-driven temper tantrums. We keep wanting to go back to that, to find out what happened to all of those people we see, endlessly laughing and playing with goats and hacking up palm fronds in the home video footage. Repeatedly, the tension of that original storyline is slackened, as yet another side-narrative is introduced. It is not surprising that Gellerand and Goldfine would find all of it compelling, but it makes "Galapagos Affair" a frustrating experience.

Nobody knows what happened back then. But people vanished off the face of the earth. Everyone has a different theory on "whodunit," and the fun of the film is to make your own guesses. The best part may very well be an actual 1932 silent movie, filmed on Floreana, and shown in its entirety in "Galapagos Affair". The silent film is called "The Empress of Floreana," starring the real-life Baroness as a conniving and bra-less pirate queen, coldly killing innocent interlopers who dared step foot on her virgin shore. 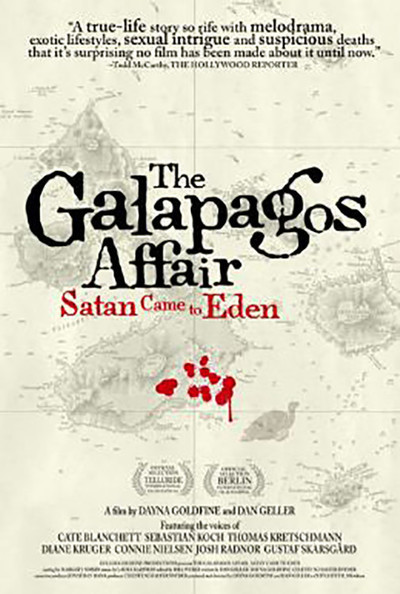