Thirty years ago, however, it was a different time, which Jason Reitman explores with frustratingly erratic success in “The Front Runner.” Working from a script he co-wrote with Matt Bai and Jay Carson, based on Bai’s book All the Truth Is Out: The Week Politics Went Tabloid, Reitman revisits the downfall of Gary Hart, the progressive Colorado senator who was on track to secure the Democratic nomination and probably the presidency in 1988.

For starters, the normally charismatic Hugh Jackman is horribly miscast as Hart. He seems too old and too world-weary to be the 46-year-old, idealistic face of the future. No matter the personal and political pressure Hart is under, he remains closed-off and on-message; even his sporadic outbursts of anger seem stiff. The script offers little insight into his true feelings within this crucible, and it doesn’t provide Jackman with much of a moral or emotional evolution to portray. Hart is at the center of this story, and yet he feels like the least-developed character on screen. His chief personality traits are defensiveness and lack of understanding: Why is his personal life anyone’s business? And the drably fluffy wig Jackman is wearing – meant to recreate Hart’s lustrous mane—isn’t doing him any favors.

The supporting figures surrounding Hart are actually more compelling, and as always, the director of “Juno,” “Up in the Air” and “Tully” has amassed a strong cast of actors to bring them to life, including stalwart J.K. Simmons as the humorously gruff campaign manager Bill Dixon. But Reitman’s sprawling, Altmanesque approach to storytelling, filled with wandering, single takes and overlapping bits of dialogue, frequently fails to make the best use of their talents, too.

This technique does provide an efficient and immersive scene-setter off the top, though. In one fluid movement, Reitman introduces us to several of the key figures and themes on the night of the 1984 Democratic National Convention when Hart lost the nomination to Walter Mondale. He moves elegantly from the inside of a TV news satellite truck, out to a crowd clogging the streets of San Francisco, then focuses on a couple of Hart’s staffers making their way through the morass before returning to the satellite truck, then tilting up to a hotel window where Hart himself is looking down as he ponders his political future.

A few years later, he’d set his sights on the White House again. But a fling with a pretty blonde from Miami named Donna Rice (Sara Paxton), whom he met at a party on a yacht with the unfortunate name of Monkey Business, would put a premature end to that dream after only a few weeks. “The Front Runner” follows various reporters’ attempts to nail down rumors of Hart’s serial infidelities, his family’s stunned reaction and his staff’s increasing inability to contain the fallout once news of the Rice affair broke. But it also tries to capture a moment of cultural and journalistic change—from ignoring politicians’ dalliances out of an abiding sense of decency to diving headfirst into the tabloid-friendly muck. Why now? “The Front Runner” doesn’t have an easy answer for that. But Mamoudou Athie intriguingly personifies this shift as an up-and-coming Washington Post reporter on the Hart beat who aims to maintain a traditional sense of media integrity while also acknowledging there’s an important story developing right before his eyes.

As Hart’s tolerant wife, Lee, Vera Farmiga is reliably great, offering some subtle moments of truth regarding her tacit agreement to look the other way when it came to Hart’s secrets and lies. And Molly Ephraim provides quiet wisdom and strength as the rare female leader within Hart’s campaign, and therefore the de facto protector for the hunted Rice.

Reitman gets the superficial details of the era right: the pay phones, the big sweaters, the constant indoor smoking. But he’s missing both key insight and satirical bite in his depiction of this pivotal point in American history. Privacy is about to become a thing of the past. In “The Front Runner,” it dies with a whimper. 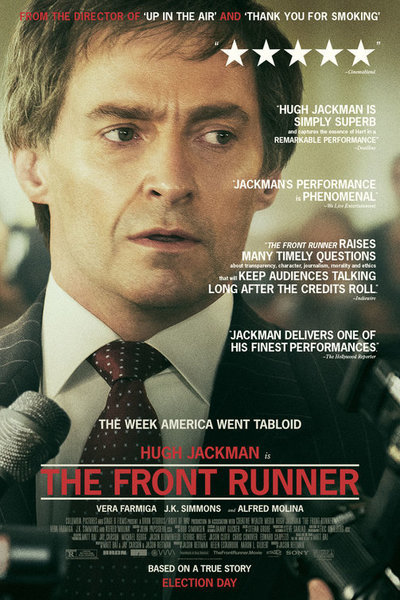 Writer (based on the book "All the Truth Is Out" by)