While patiently hoping for a soupcon of slapstick or a risible remark that would at the very least cause me to emit a bemused chuckle now and then, I couldn't help but think of a phrase that inspired another movie title while sitting through the alleged comedy "The French Minister".

Namely, lost in translation. Apparently, director Bertrand Tavernier's rare foray into a humorous state of affairs had them laughing their tetes off in his homeland considering it was nominated for three Cesars, the Gallic answer to the Oscars, and won two of them.

But this rather arch attempt at verbally charged political satire about the travails of Arthur (Raphael Personnaz), a just-hired novice speech writer who is swiftly plunged into the rigors of penning a crucial address for the French minister of foreign affairs to be given at the United Nations, fell flatter than an underdone soufflé pour moi. It is never a good situation when a subtitled foreign release is highly dependent on words to get its point across—especially when those words are supposed to make you laugh.

I had been hoping that "The French Minister" would be a Francophile's answer to Armando Iannucci's "In the Loop". That scathingly hilarious British burlesque from 2009 involved a crisis that develops when a politico's misspoken response to a question about the possibility of a Middle East war sets off a chain of events that also drags American officials into the fray.

There, the human ticking time bomb at the center was the invective-spewing enforcer for England's prime minister, played with salty-tongued aplomb by Peter Capaldi. It was the flawed personalities and the driving need to protect their own butts that were in the forefront, not so much the arcane behind-the-scenes machinations of diplomacy. And, much like Iannucci's HBO show "Veep", there was just enough reality reflected in the lunacy to make it feel relevant.

This film, based on a cult graphic novel "Quai d'Orsay" and informed by a 2003 speech given by former French Foreign Minister Dominique de Villepin, is nearly the exact opposite in its approach. Most of the action is set inside the spacious and ornately gilded headquarters of the Ministry of Foreign Affairs ruled by Alexandre Taillard de Worms (a debonair dervish of an alpha male who provides an ample showcase for Thierry Lhermitte's talents).

The arrogant, charismatic and often contradictory silver-haired pontificator, a know-it-all who likes to spout pithy downbeat quotations by the Greek philosopher Heraclitus as well as to reference Tintin, is such a force of nature that papers fly and a sonic whoosh resounds whenever he strides into a room. His 12-person staff, meanwhile, is shoved into cramped quarters with no Internet and barely space to move. Arthur not only must meet Taillard's impossible standards—and constant requests for rewrites—but also touch upon the seemingly random special interests of others when piecing together the address.

It's not that Tavernier doesn't try to provoke laughs. Several stem from Arthur's gauche attempt at a workplace uniform—basically, dirty shoes and rumpled suit—with regular sneering asides made by his more stylish peers. As a running gag, Taillard is given to espousing the three key principles of diplomacy as a guide for Arthur. But they keep shifting. First, it's responsibility, unity and efficacy. Later, they turn into legitimacy, lucidity and efficacy. Then, they change to legitimacy, unity and efficacy. Maybe it's me, but this didn't scratch my funny bone one bit, let alone tickle it.

There are invented global hotspots, such as Lusdemistan and Ubanga, and a supposed anchovy war in Spain to contend with—but such references are too silly to give audiences much of a stake in the outcome of the speech, a matter that moves the action to Manhattan and takes up the last half-hour of running time.

"The French Minister" is a fairly well made movie, with solid performances (including Niels Arestrup as the rumpled although unruffled chief of staff who takes Arthur under his wing). Maybe the problem is that Tavernier has made a French comedy—but not a very universal one. 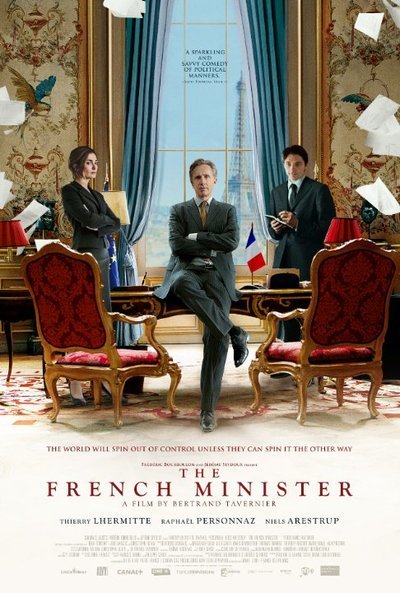