What is “The Eyes of Tammy Faye”? Michael Showalter adapts the documentary of the same name, the 2000 work that entertainingly reshaped the legacy of a woman often derided for her reliance on make-up and accused of bilking her loyal supporters. But that film exists. Why remake it as a showy dramedy? I’m not sure anyone ever asked this question. It’s best appreciated as a performance piece from an actress going all-in, but everything around that whirlwind of an acting turn feels under-considered. It’s as if someone decided “Jessica Chastain plays Tammy Faye” was all that anyone needed to consider, and the rest of the movie would just write and direct itself. It doesn’t. And that sense that there’s not enough meat on the bones of this film creatively begins to grow stronger and stronger with each passing scene, until it’s clear that no one was really willing to dig into what this true story says about faith, acceptance, and resilience. They were too busy applying makeup and gaudy costumes to bother.

Chastain throws herself into Tammy Faye Bakker, the notorious wife of the king of televangelism, Jim Bakker (Andrew Garfield). In a rather traditional biopic structure, Tammy Faye’s life unfolds from her childhood fascination with religion to her courtship with a young Jim. The Tammy Faye of Showalter’s film is outspoken and strident, daring to take a seat at a table with the men advising her husband on his growing career, much to the disdain of a conservative like Jerry Falwell (a glowering Vincent D’Onofrio). Showalter and Chastain play Tammy Faye as a pure soul, someone who believed in all of her causes and was surrounded by inferior men who consistently tried to dim her inner brightness.

Whether or not that’s true isn’t really an issue. I’m fine embracing the positive side of Tammy Faye, especially given her progressive beliefs about acceptance and homosexuality—Showalter recreates the famous interview with Steve Pieters that recognized the existence of AIDS at a time when no one in Tammy Faye’s profession was willing to do so, and it has undeniable emotional power. Chastain captures her as a constantly spinning firecracker, someone who people like Jim and Jerry knew how to use to reach a financially-driven fan base but couldn’t really comprehend. She was pure. When Chastain says, “I just want to love people,” she clearly believes it.

However, the image rehabilitation for Tammy Faye Bakker only gets so far dramatically, and would have been better served in a richer, more ambitious film. Think of something like “I, Tonya,” a movie that also rehabs a very public figure but does so with wit and passion that’s lacking here. Too much of “The Eyes of Tammy Faye” leans on make-up and costumes to tell its story, cutting together montages of “Prime Tammy Faye” like a highlight reel at a Lifetime Achievement Award ceremony. It all lacks in depth or dramatic purpose, something that’s enhanced by a truly thin representation of Bakker. Garfield is a very talented actor, but writer Abe Sylvia never bothers to get under the skin of Bakker. Was he a charlatan or a purist? He’s clearly a weak man, but he’s also kind of a blank slate here, the straight man to Tammy Faye’s passion, and he comes off as underwritten.

This is the Tammy Faye story, without question, and fans of hers and Chastain will forgive the flaws of a film about a woman who wanted to transfer God’s love through her to the camera. But most of those people know about Tammy Faye from the doc and know that Chastain can act circles around people when she’s given the right material. As a performance piece, “The Eyes of Tammy Faye” connects. But is that enough? Why should we hear this story again? Tammy Faye Bakker longed for acceptance—both receiving and giving it—and Showalter’s film provides some solid reminders of how much we need to value it. I just wished the lesson came in a film that felt like it really bothered to understand her on a deeper level or open the eyes of those who have been closed for so long instead of just preaching to the choir.

This review was filed from the Toronto International Film Festival. The film opens on September 17th. 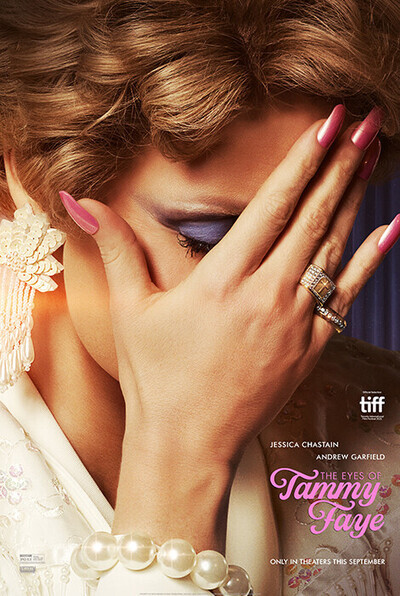 Writer (based on the documentary by)