“The Exterminator” is a sick example of the almost unbelievable descent into gruesome savagery in American movies. It's a direct rip-off of “Death Wish,” a 1974 Charles Bronson hit about a man who kills muggers to avenge the death of his wife. “Death Wish” was violent, yes, but it remained within certain boundaries. It established a three-dimensional character, it gave him reasons for his actions, it allowed us to sympathize with those reasons and yet still disapprove of the murders he was committing. “The Exterminator” does none of those things. It is essentially just a sadistic exercise in moronic violence, supported by a laughable plot. The "exterminator" of the movie's title (Robert Ginty) has his life saved in Vietnam by a black man (Steve James), who becomes his closest friend. Back home in Brooklyn, they break up a gang in the process of stealing beer from a loading dock. The gang gets revenge by attacking and permanently paralyzing the black man. The hero vows revenge.

So far, so good. What's profoundly disturbing about the film is that it uses this "justification" in the plot as an excuse for revenge scenes of the sickest possible perversion. The motive is obviously to shock or titillate the audience, not to show plausible actions by the character. For example: Ginty gets one gang member to talk by tying him to a wall and threatening him with an acetylene torch. Then he machine-guns the men who attacked his buddy.

They get off easy. Determined to get money to support the family of his paralyzed friend, Ginty kidnaps a Mafia boss. He hangs him by chains over a huge meat grinder, goes to rob his house and then lowers the man into the grinder, converting him to ground meat. He justifies this crime in a letter to anchorman Roger Grimsby (who plays himself—to his horror, no doubt, when he saw this film). And then he goes on a one-man vigilante campaign to clean up New York.

To help him in his campaign, the movie shows the audience evil situations and then lets the "exterminator" remedy them. For example, a hooker is lured to a house of male prostitution, where a sadistic client disfigures her with a soldering iron. Some weeks later, the "exterminator" picks up the hooker, sees the burn scars when she undresses and decides to avenge her. He goes to the male brothel, sets the owner on fire and shoots a customer dead.

There's more, involving an insipid policeman (Christopher George) and his girlfriend (Samantha Eggar), who turns out to be the paralyzed man's doctor. This is the kind of movie that establishes their relationship by sending them to a concert and then focusing on the concert because they have no dialogue. The CIA also gets involved, but who cares? “The Exterminator” exists primarily to show burnings, shootings, gougings, grindings, and beheadings. It is a small, unclean exercise in shame. 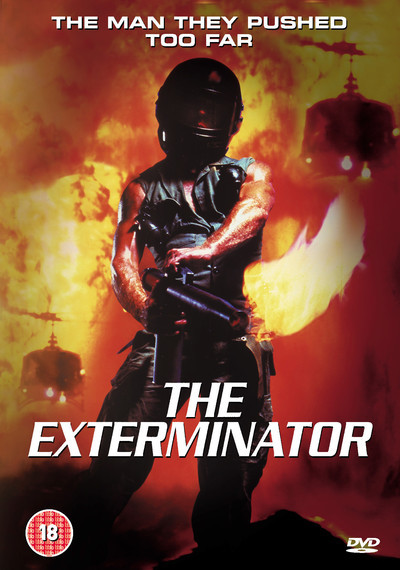