There’s no saving some movies from themselves, even if they come loaded with a fool-proof idea and a parade of talented actors who should be able to sell even a much lesser premise. Unfortunately, “Death at a Funeral” writer Dean Craig’s fumbling “The Estate” is one of those movies. On paper, its “let’s swindle our wealthy aunt out of her millions while she’s in her death bed” sounds timelessly funny. And what could possibly go wrong when that elderly woman is played by the legendary Kathleen Turner and the surrounding lemmings feature the likes of Toni Collette, Rosemarie DeWitt, Anna Faris and David Duchovny?

A lot actually, even though the cast probably had a ball in each other’s company while making this tortured comedy. If only their presence alone was enough for the rest of us too, in order for us to stomach the plotty proceedings that unfold in a handsome mansion in New Orleans. Turns out, slimy familial jokes, uninspired zingers, a prosthetic penis and even Turner’s signature (and dearly missed) raspy voice that understandably blurts out “You’re all assholes!” in one scene don’t add up to sufficient sums of laughs.

The story is simple enough, starting with the down-on-her-luck divorcee Macey (Collette) and her fickle sister Savanna (Faris) struggling financially, holding onto their family restaurant business for dear life even though the place seems to be on its last legs. They can’t get a loan or find a quick solution for survival, other than visiting their wealthy and terminally ill Aunt Hilda (Turner) and milking her for every penny she’s worth by claiming a stake at her inheritance. The two prove to be too late however. Their scheming cousin Beatrice (DeWitt) seems to have beaten them to the punch and already moved into the grand house with her faux over-attentiveness and toothless husband James (Ron Livingston). Rounding off the cousin circle is the smarmy Richard (Duchovny), who arrives in his Porsche with his velour tracksuits, icky-colored aviators and even ickier attitude.

Beatrice and James seem to quarrel to no end, as Macey and Savanna continuously try to invent new ways to win Aunt Hilda over. Elsewhere, the grotesque Richard keeps on making inappropriate passes at Macey (whom he’s apparently always had a thing for) while the sidelined Ellen (Keyla Monterroso Mejia), who is Macey and Savanna’s sister, stands as a miscalculated character in a movie that has little interest in her. The competition among the cousins escalates, with none of them knowing for sure whether they’d make it into Aunt Hilda’s final will.

What Macey and Savanna do learn however is Hilda’s growing sexual frustration as a dying woman who melancholically misses her high school crush, Bill (Danny Vinson). Now an unkempt sex offender who looks like he hasn’t showered in at least two weeks, Bill accepts the offer of the duo and agrees to have a date with Hilda in exchange of money. But would getting Hilda laid actually help the two hapless women? Beatrice seems to think so strongly—so convinced in fact that she asks her own husband to satisfy Hilda’s sexual appetite. But Bill ends up outsmarting the bunch by proposing to Hilda and rapidly establishing himself as the soon-to-be-dearly-departed old woman’s next of kin.

Hilarity doesn’t ensure, mostly due to the coy nature of “The Estate”—shouldn’t a film so keen on ugly-on-the-inside people and their various vulgarities try to be a little less tentative, a little more knowingly offensive and therefore, funnier? But Craig’s film never quite finds its groove, neither as a dark comedy nor as an absurdist farce. While it’s the least of the film’s problems, an amateurish digital cinematography that makes an average “Curb Your Enthusiasm” episode look like a Terrence Malick film doesn’t help the matters either. Even with an embarrassingly rich cast, “The Estate” chokes on its own airlessness. 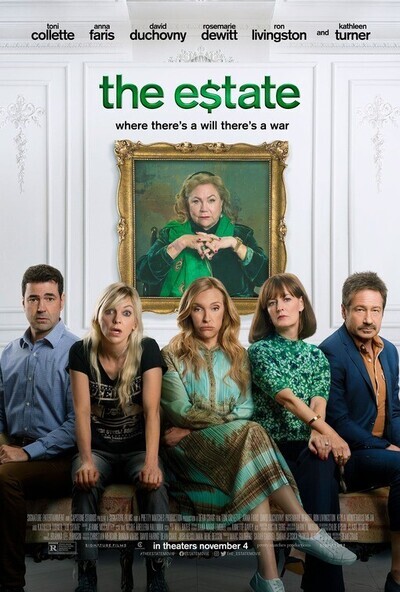