The Education of Little Tree

“The Education of Little Tree” is another fine family movie that will no doubt be ignored by the fine families of America. The notion that there is a hungry audience for good family entertainment, nurtured by such dreamers as the critic Michael Medved, is a touching mirage. American families made it a point to avoid “The Secret Garden,” “The Little Princess,” “Shiloh” and even “Rocket Man,” and I fear they'll also shield their offspring from “The Education of Little Tree.” Too bad. If children still exist whose imaginations have not been hammered into pulp by R-rated mayhem such as “Starship Troopers,” this film will play as a magical experience.

The film tells the story of a half-Cherokee orphan who eludes the clutches of his prim white aunt and is reared in the wilderness of the Great Smoky Mountains by his grandparents. Granma (Tantoo Cardinal) is Cherokee; Granpa (James Cromwell) was “born white, but learned to see through Cherokee eyes.” In a series of vignettes that adds up to life's lessons, they teach Little Tree (Joseph Ashton) his school lessons, the poetry of nature and a lot of common sense.

The film, set in the 1930s, of course sentimentalizes the wisdom of Native Americans--who, after decades in which they could do no right in the movies, now can do no wrong. Even Granpa's occupation--distilling and selling moonshine--is seen as a sort of public service for the local population, who don't have the money for store-bought booze. But for Little Tree, life in his grandparents' small cabin is an idyll: He learns of nature, of the seasons, of dogs and frogs and the mysteries of life and death. More insights are provided by an Indian neighbor, played by Graham Greene.

The movie has its share of suspense and action, especially when revenuers come tramping through the woods looking for the still (the loyal dog Blue Boy holds them at bay while the boy crashes through the undergrowth rescuing a sack of Granpa's equipment). And when the grandparents lose custody of the boy because of the moonshine business, there is a sequence set in a place called the Notched Gap Indian School, which is less a school than a reformatory, trying to cure its students of the notion that they are Indians. Little Tree looks through a window at the star that Granma told him to keep in sight, and knows that it looks down on her, too. Granpa takes more direct action.

The film is quietly well-acted. James Cromwell, as Granpa, proves here, as he did as the farmer in “Babe” and the police captain in “L.A. Confidential,” that despite his unmistakable physical presence he can play characters who are completely different from one another. What I liked here was the way Granpa is allowed to be sweet and light from the start; the movie avoids the usual cliche in which the older man is stiff and unbending, and only gradually yields. There is a touching sequence where we fear deeply for him. Tantoo Cardinal, as Granma, has a presence and conviction that gives freshness to her dialogue, which on the page might have looked rather simplistic. And Joseph Ashton, as Little Tree, is another of those young actors who is fresh and natural on camera; I believed in his character.

The movie arrives with some baggage. It is based on a book by Forrest Carter, which was first identified as autobiographical, and then, after a literary scandal, moved across the page from the New York Times nonfiction best-seller list to the “fiction” column. In the process it was revealed that Carter was in fact a man named Asa Carter, who had links to white supremacist groups and wrote speeches for George Wallace in his pre-enlightened days. What journey Asa made on his way to becoming Forrest might make a good movie, too; in “The Education of Little Tree” he wrote a story that has the elements in it for a strong, unusual, affecting drama. Anyone can find redemption.

I began on a note of pessimism, fearing that families will not embrace this wholesome, PG-rated film. That would be a shame. My best guess is that more 9-year-olds will see “Scream 2” than “Little Tree.” The loud, violent, cartoonish entertainment that's pumped into the minds of kids cannot be creating much room for thought and values. It's all sensation. Such movies as “Little Tree” are the kind that families can discuss afterward. There are truths to be found in them. And questions. Somehow the noisy action junk never leaves any questions (except about the future of our civilization). 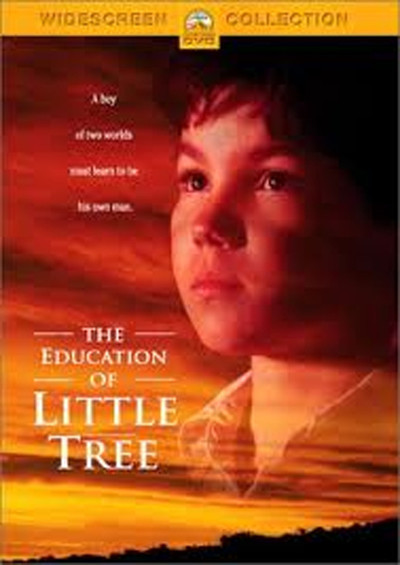 Rated PG For Language and Thematic Elements, Including Old-Fashioned Discipline