Anyone attempting to do a new screen version of something that has already been filmed before must at some point face the inevitable comparisons with the earlier take on the material. In the case of “The Dresser,” a new version of the 1980 Ronald Harwood play that was originally produced for British television and which will be appearing in the U.S. on the Starz cable network, that is especially daunting because the previous screen incarnation was a 1983 film that went on to receive five Oscar nominations, including Best Picture, Adapted Screenplay for Harwood, Director for Peter Yates and two Best Actor nods for co-stars Albert Finney and Tom Courtenay (the latter reprising his role from the original stage production). Those are some mighty big shoes to fill and while the end result may not quite live up to the reputation of the earlier film, it is still a reasonably entertaining work that offers viewers the pleasure of seeing two of the great actors of our time, Anthony Hopkins and Ian McKellen, working together for the first time in their illustrious careers.

Set during World War II, the film is centered around the relationship between an aging Shakespearean actor known only as Sir (Hopkins) and Norman (McKellen), who is nominally his dresser but who appears to have devoted his life to taking care of virtually every aspect of Sir’s life in order to get him out on stage for yet another performance of one of the Bard’s classics. As of late, however, accomplishing that has become more of a challenge as Sir, who is already a monstrously self-absorbed ham who cruelly ignores both his wife (Emily Watson), who has sacrificed her own once-promising career in order to play an increasingly age-inappropriate Cordelia to her husband’s Lear, and the stage manager (Sarah Lancashire) who clearly dotes on him while leching away at the company’s ingenue (Vanessa Kirby), appears to be slipping into what we would nowadays call dementia. There was a recent incident in which he began taking off his clothes and orating in the middle of Market Square during an raid and when he does arrive at the theater, determined to go on with the night’s production of “King Lear,” he starts putting on the makeup for Othello, whom he played the night before.

Norman gets him out of those jams and indeed, there are times when it seems as if he is more determined to get Sir on the stage than Sir himself. That night’s performance begins on a precarious note when Sir refuses to make his first entrance, leaving the other actors to desperately vamp new lines to one of the most famous plays of all time before he finally comes on stage. Despite the backstage drama and the air raid sirens that can be heard blaring outside, it seems as if Sir is giving the performance of his career this night but things prove to be just as dramatic behind the scenes as Norman does everything in his power to keep Sir going, fortifying himself along the way with a steady stream of cutting remarks and nips from his ever-present flask. What exactly it is that he gets out of his increasingly codependent relationship with Sir is difficult to say but after a series of unexpected events, Norman is finally forced to face exactly what he and his unceasing devotion to Sir have earned him in return with devastating results.

Considering that it is about the theater and the ways in which those who practice stagecraft manage to pull themselves together to put on a show night after night, it is no wonder that Harwood’s play, which was inspired by his own experiences working as a dresser for Shakespearean actor Sir Donald Wolfit, has managed to attract so many top actors over the years. It certainly isn’t for the play itself, which is never quite as deep or profound about either the stage or the human condition as it clearly thinks itself to be. The previous film version managed to work around this by opening the film up from its stage bound setting in ways that allowed viewers to get a taste of the life that was passing by the performers as they were slogging through yet another production for crowds that are by now probably more concerned about getting home before the net air raid. (It also provided the film’s single most memorable scene, in which Finney’s Sir manages to stop a train from pulling away in a crowded station using nothing but the power of his magnificent voice booming out “STOP THAT TRAIN!!!”). This time around, Harwood, who has adapted his play again, and director Richard Eyre have stripped away those outside moments in order to keep all the action contained to the backstage area of the theater, save for a few precious moments of the stage where we see Sir in action. This approach isn’t necessarily a bad idea in theory but it doesn’t quite come off in practice—instead of suggesting just how isolated this troupe truly is from the world, it just feels, for better or worse, like a filmed play and nothing more.

While the visual presentation of “The Dresser” may be somewhat lacking in sparks, it more than makes up for that with the undeniably fiery and entertaining turns from both Hopkins and McKellen. In recent years, both actors have appeared in so many comic book epics and silly spectacles that have used their names and reputations to help burnish the schlock in question that it is sometimes easy to forget just how good they can be when given material worthy of their talents. The roles of Sir and Norman are parts created specifically for actors who can bluster and roar with the best of them as well as handle the smaller and more nuanced moments as well and Hopkins and McKellen are both more than up to the task. Their characters are by turns funny, repellent, sympathetic, cruel and eminently pitiable throughout and they embody them in ways that genuinely make you feel the long relationship between the two characters and all of their attendant quirks. (There is an especially delightful moment in which the name of the so-called “Scottish Play” is uttered backstage and the two go through a number of rituals so as to avoid any possible jinxes.) “The Dresser” may not make anyone forget the previous film version by any means but as long as Hopkins and McKellen are on screen showing their stuff, it is worth watching. 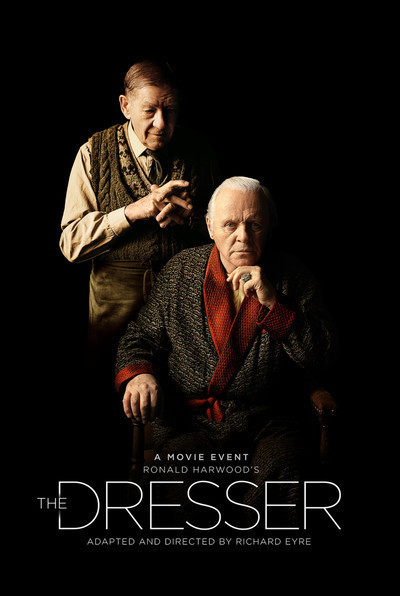 Emily Watson as Her Ladyship