Under ordinary circumstances the very idea of an overtly self-conscious art film is likely one to make even the most dyed-in-the-wool cinephile want to curl up in a fetal position in a corner for, say, the average length of a self-conscious art film. Which I suppose qualifies "The Double" as something of a miracle. Art films don’t come more self-conscious than this one. Suggested by a Dostoevsky novella, but set in an entirely created world in which only the language makes any reference to the place moviegoers will reenter once they exit the theater, and paying homage to the likes of "Brazil," Orson Welles’ "The Trial," and "Eraserhead" within its first five minutes, "The Double" insists upon its bona fides with a will and makes you like it.

The movie begins with Jesse Eisenberg sitting in an empty subway car of gray-yellow interior, a subway car into which a sickly light oozes through its windows. In short order, a more aggressive, faceless man tells Eisenberg’s character that the seat Eisenberg inhabits is rightfully his. This despite the fact that they’re the only two people in the car. Eisenberg’s sheepish character, Simon James, defers to his ostensible superior. There’s the movie’s theme in a nutshell. Simon works in an oppressive office, for a dismissive boss (Wallace Shawn, in full contemptuous sputtering mode). He’s crushing on a girl in another part of the office who runs a giant copy machine, Hannah, played by Mia Wasikowska. She literally doesn’t know who Simon is. Neither does the waitress (Kathy Moriarty) at the Uber-Lynchian greasy spoon Simon frequents. For recreation, on evenings, Simon peers out of a telescope at the window of his oppressive apartment, and one evening, sees a fellow commit suicide. Soon after that, another person comes into Simon’s life: his double, a guy named James, a glib, confident, fun guy who immediately takes Simon into his confidence; under his wing so to speak, the better to exploit Simon and get his way at work with Hannah and even with the greasy spoon waitress. This irks Simon, but being an overly meek fellow to begin with he doesn’t quite know how to handle his annoyance.

While the cinematography and production design give "The Double" a formidable if not particularly original look, what really sells the movie is its acting. Eisenberg is unshowily brilliant in his dual role, taking the recessive qualities of his "Squid and the Whale" character and tightening them ruthlessly for Simon, and playing the glib, crass James as a "Social Network" Mark Zuckerberg who’s all ambition but no ideas. While Wasikowska plays only a single character (or does she?), her Hannah is head-spinningly schizoid, and Wasikowska seems to have this almost supernatural ability to change the bone structure of her face at will, so when she wants to go for a "blank" affect, boy can she make that happen.

Despite its glum themes, the movie chugs along at a nice pace, and the script, by director Richard Ayoade and Avi Korine (Harmony’s brother!) is filled with mordant and often colloquially vulgar comedy, which throws the already off-kilter proceedings into interesting relief. Ayoade, a comedic sensation in his native Britain, here applies his obvious intelligence and film-style-absorbing qualities to a better purpose than he did in his directorial feature debut, 2010’s teen-angst chronicle "Submarine," which I described at the time as "forced-eclectic." I suppose in theory there isn’t a whole lot of difference between "forced-eclectic" and "self-conscious art film," only here Ayoade has found a way to make it work, and in the end, that’s all that counts. 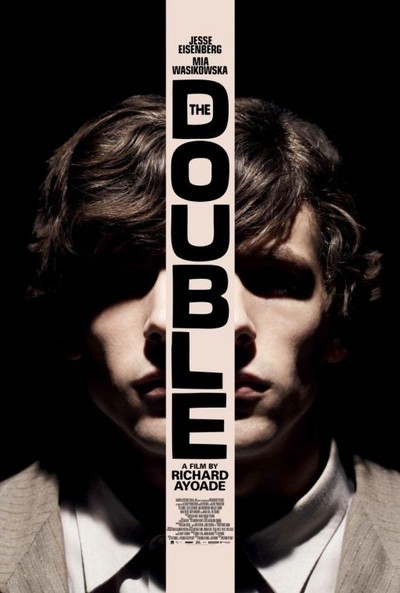 James Fox as The Colonel