The bad guy likes opera in the mostly forgettable heist/hostage thriller “The Doorman,” a movie that’s well-versed in clichés and basically watchable, but never really good. Victor Dubois (Jean Reno), this movie’s villain, is a Wagner-loving, Goya-appreciating fiend for high art. That’s his thing, but it’s also one of many tropes used throughout this tired action movie, which follows the generically haunted ex-Marine Ali (Ruby Rose) as she tries to stop Dubois from stealing priceless art hidden in a ritzy apartment belonging to her estranged brother Jon (Rupert Evans). So while art is a prominent concern, it’s never a meaningful theme in “The Doorman,” since so much dialogue only serves to set-up for action scenes that are over-edited and only competently staged.

Dubois and Aly talk in action movie mainstays and strike generic poses: he’s weary of hunting for art, while she’s trying to make an emotional connection following a traumatizing experience serving at an American embassy in Bucharest. It’s hard to take “The Doorman” seriously whenever characters quote and refer to art that brings to mind other art, like when Dubois’ men listen to the by-now inescapable “Ride of the Valkyries” from Wagner’s most famous opera while tearing up Jon’s apartment with sledgehammers. “What does this bring to mind?” one asks the other. “Apocalypse Now,” says another heavy. “I love the smell of napalm in the morning.” They then go back to sledgehammering.

There’s a lot more where that came from in “The Doorman,” an action movie that tries to suggest a lot but never says anything. Which is weird because we’re talking about an action movie where everything takes place in a single location—Jon’s apartment building. There doesn’t need to be any big ideas in such a hermetically sealed, idea-proof container, just some superficially involving set pieces, maybe a charismatic lead turn, a couple laughs, things of that nature. Unfortunately, “The Doorman” is the kind of uninspired movie that features surreally bad placeholder dialogue, credited to co-writers Lior Chefetz and Joe Swanson, like when a random socialite takes a look at Aly and remarks “I may be old-fashioned, but: a woman doorman?” Nobody else in the movie cares about Aly’s gender, by the way, though one hench-guy asks her what her sign is—“You're not a Virgo, are you? I dated one of those. Always had to choose the movies”—before she inevitably takes him down.

Admittedly, dialogue and character development are probably not high priorities if you’re curious about a movie like “The Doorman.” You might instead be interested in the film because its creators are obviously riffing on action movie tropes that only became further entrenched by superior movies like Luc Besson’s “La Femme Nikita” and “The Professional,” both of which also feature Reno in a prominent role, and a traumatized heroine with short hair. Even transitional scenes feel like they were copied from other films, like when Dubois and his guys walk climactically into an elevator, and climb towards Jon’s apartment. A feeling of déjà vu might set in as you watch the doors close on Reno’s gaunt, disengaged profile. Didn’t I already see this scene in “Die Hard,” “Sudden Death,” “Under Siege,” and “White House Down”?

Probably, but how do you explain the utter cheesiness of art-loving baddies like Borz (Aksel Hennie), who introduces himself by saying how much he loves Rachmaninoff (“because he's so unexpected”)? And why is the painting that everybody’s chasing after a Caravaggio nativity scene (“with Saint Francis,” as one guy points out)? And what exactly are we supposed to do with an exchange as pretentious and besides-the-point as when Reno, practically snoring his way through his line readings, remarks “I admire how an artist can dip his brush into his soul and capture his times in paintings,” and Evans, still in character somehow says of “The Sleep of Reason Produces Monsters” that “it appears Goya captured our times as well”? I wish there was something to all of the references and callbacks in “The Doorman,” but nothing comes to mind. 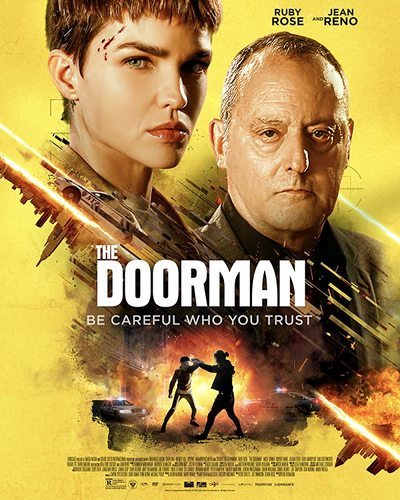 Rated R for violence throughout, language and brief teen drug use.