In May 1939, as Europe lurched towards war, amateur excavator/archaeologist Basil Brown, hired to dig up the huge mounds on Edith Pretty's property in Suffolk, struck gold (literally). First, he came across the skeleton of an 88-foot ship dating to the Anglo-Saxon period. This was the first phase of what Sue Brunning, curator at the British Museum, has called "one of the most important archaeological discoveries of all time, certainly in British archeology but I would argue in the world." The next phase was discovering the burial chamber within the ship, filled with a treasure trove of almost perfectly-preserved artifacts, made from gold and garnet: a stunning helmet, shoulder clasps, a golden belt buckle. Pretty donated the artifacts to the British Museum, where they sit to this day, known as the "Sutton Hoo find." This fascinating story is the subject of Netflix's new film "The Dig," directed by Simon Stone, with Moira Buffini adapting John Preston's novel for the screenplay.

Basil Brown (Ralph Fiennes) is a humble man, of working-class origins, who was taught how to excavate archaeological sites by his father and his grandfather before him. Edith Pretty (Carey Mulligan), a widowed woman living on a huge estate with her small son Robert (Archie Barnes), hires Basil away from the Ipswich Museum to dig up the mounds on her property. Basil doesn't have high hopes. These sites have been picked over by people for centuries, he informs her. She offers him more money than the museum, so he gets to work. Young Robert latches on to Basil as a new father-figure, and cavorts around on the mound as Basil digs. At first Basil utilizes just a small ad-hoc team, but after the ship is revealed, throngs of people descend onto Suffolk, wanting a piece of the action.

Told with simplicity and grace, and a sensitivity to the pastoral Suffolk landscape of wide fields and wider skies, "The Dig" is often quite thrilling, particularly in the dig's initial phases, when it's just Basil and Edith discussing how to proceed. Edith had a youthful interest in archaeology, and was accepted to university. Her father nixed those plans. She took care of her father through his long illness, and only got married after he died. This sad backstory is described in just one or two lines, but it's all over Mulligan's pinched determined face, dogged by loss and disappointment. Father-dominated her whole life, now widowed, in very poor health herself, she makes the decision to dig up those mounds, even though war is imminent.

The first half of the film is mostly Mulligan and Fiennes, and there's an interesting dynamic at work. They come from two totally different worlds and classes. But they intersect in important ways. They share a passion for knowledge, for discoveries of the linkages between eras and peoples. Tutankhamun's tomb was excavated in 1922 by British Egyptologist Harold Carter, whom Edith name-drops at one point. Edith would have been a teenager in 1922. One can imagine how that world-changing event—and seeing those artifacts for the first time—would have filled her with wonder and awe. She has a feeling about those mounds in her yard. She has a feeling something is down there. When Basil discovers the ship, he declares it sixth/seventh century Anglo-Saxon, and this is at first scoffed at by the "experts." But he's right.

The plot thickens when people descend onto the land, to continue the dig, and jostle for credit. Ken Stott plays Charles Phillips, a famous archaeologist, who declares the site far too important to be in the hands of Basil, an amateur with no formal education. Part of the new excavation team is Stuart Piggot (Ben Chaplin) and his budding-archaeologist wife Peggy (Lily James). Edith's cousin Rory (Johnny Flynn, charming as always) takes photographs of the dig. "The Dig" loses a little steam during this section, when it gets side-tracked by Peggy's dissatisfaction in her marriage. Stuart seems just a little bit too into one of his male colleagues (Eamon Farren), and Rory is so friendly and gentle and makes Peggy feel things she's never felt in her marriage. These complicated emotional matters arrive over an hour into the film, far too late to have any real staying power. Basil mostly disappears during this section, and the film really misses him.

But this larger ensemble is eventually shuffled into the overall mix. What matters is the dig itself. Stone's attention to detail is crucial: he shows how a dig must proceed, the dangers of a dig, how the artifacts are discovered and then removed from the dirt—the way this is presented helps non-archaeologically-minded audience members understand what is happening and how. You believe in Fiennes' expertise. You believe in Peggy's too. The other element is the approach of war. RAF planes roar over the field with increasing regularity. Everyone knows that once war is declared the digging will have to cease. They're all fired up with a sense of urgency.

There are moments of emotion and triumph, especially during the sequences of discovery, but the mood overall is understated, quiet, thoughtful. Phillips makes an impassioned speech about what the "Sutton Hoo find" means, and it's an important thematic element. Common wisdom assumed the Anglo-Saxons were violent savage marauders, but the exquisite artifacts discovered showed "they had art. They had culture." The Sutton Hoo find represented a shift in consciousness around shared ancestry and legacy, and a sense of ownership over the collective past. These themes are all present in "The Dig" but nothing is underlined or punched up to amplify significance.

Instead, you get Edith and Basil locking eyes across the hole in the ground, speechless, two misfit outsiders realizing they were right, there is something down there, and it is beyond their wildest dreams. 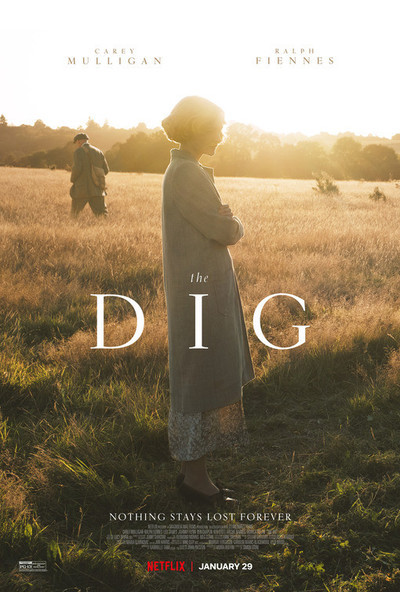 Monica Dolan as May Brown