The Devil Has a Name

This movie’s opening scene is a scenery-chewing feast. Kate Bosworth’s Gigi comes swaggering into a boardroom at Houston’s Shore Oil, wearing a duster that maybe she picked up in the costume trailer for a spaghetti Western, and sets a flask in front of her not too long after sitting down.

Across from her sits Alfred Molina as “Big Boss,” who sneers contempt BIGLY as he drawls snide observations about JFK’s assassination and implies that Gigi may be in for something similar. The 35th President, he says, “was culled like a veal calf,” because “LBJ could not abide whippersnappers.” Apparently Big Boss is not up on Robert Caro, who thoroughly discredited any notion that LBJ was involved in Kennedy’s assassination without breaking a sweat.

Giving no quarter in the overacting department, the usually normal performer Bosworth drawls the title phrase back as Big Boss. Which is ironic because the real devil here is the oil company, not the farmer played by David Strathairn who sues Shore Oil for polluting his land.

Reputedly “inspired by true events” but really just riffing outrageously on the Central California Water Contamination Wars, “The Devil Has a Name,” directed by actor Edward James Olmos, who also plays a supporting role here, is an angry movie that’s angry about the right things. But it's so angry that it gets a little crazy about it.

The script is by Robert McEveety, and much of it sounds like stuff Aaron Sorkin might concoct if he were on the same drug regimen our current president is currently enjoying. “The board’s issue is not with the pollution but your failure to cover it up,” one corporate functionary chides Gigi. Aside from being a tad on-the-nose, this ignores the fact that no corporate shill who’s not a complete imbecile ever pronounces the words “cover up” out loud but instead uses convoluted capitalist newspeak like “contain the narrative.” And then there’s the fact that more often than not such miscreants are convinced of their rectitude. This movie’s villains twirl mustaches that are yards long.

Various parties come around to mollify Strathairn’s Freddy; Haley Joel Osment plays a slick ad guy who lowballs him. Then Freddy is approached by a stammering would-be whistleblower who turns out to be no such thing, as anyone who recognizes Pablo Schreiber will instantly figure out.

On a couple of story arcs on “Law and Order: SVU,” Schreiber played a superhuman psychotic who kidnapped and terrorized Mariska Hargitay’s Olivia Benson maybe 34 times or so. Did I mention scenery-chewing before? In these episodes Schreiber became The Actor Who Ate New York. Here he only has about 50 minutes of screen time to chow down, but man does he make the best of it.

As for Bosworth, her massive freak-out after spilling coffee on her rug is elevated to a semi-Shakespearean “Out, damn spot” one-act; one wants to shout at her to call Stanley Steemer already.

How does the movie remain watchable despite all this breast-beating? Well, in a weird way, the breast-beating is kind of fun, once you’ve accustomed yourself to the fact that you’re in for it. And the familiarity of some of it—Martin Sheen as a righteous lawyer doing his righteous Martin Sheen thing, the easy chemistry of Strathairn and right-hand-man Olmos as they speak unsubtitled Spanish at each other—lends a Social-Justice-Movie Comfort Vibe to the proceedings.

Now available in theaters and on digital platforms 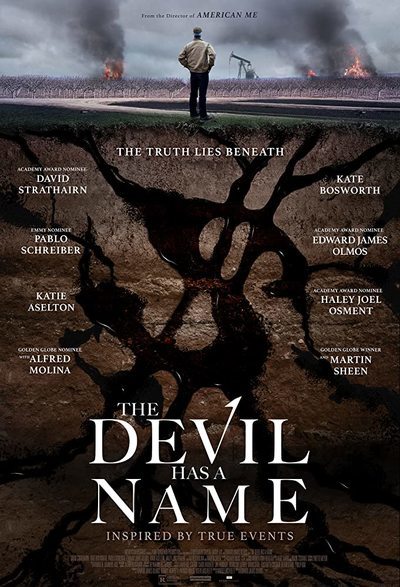 Rated NR for language, some sexual material and drug use, and brief violence.