With the uninspired pity party comedy "The Day After," self-lacerating Korean dramatist Sang-soo Hong continues a trend towards un-productive self-loathing that began last year with the half-empty "On the Beach At Night Alone" and continued with the half-full "Claire's Camera." All three films are reminiscent of Hong's superior earlier work in that they all show the world through a unimaginatively self-critical lens: a libido-alcohol-and-spite-driven artist is inevitably dumped and/or eclipsed by a free-spirited woman who, after being unwittingly dragged into his orbit, is too smart to stay there. The key difference between these Hong's superior earlier work and his recent American releases—Hong has already made at least one more film—is that his newer films cut deeply into the egos of Hong's surrogates for the sake of making a facile point: the gift of self-awareness is wasted on people who aren't strong enough to do something about it.

"The Day After" is more of the same from Hong ("The Day He Arrives," "Ha Ha Ha"), only repackaged in a more conventional narrative. It is, in this sense, more accessible than either of his other recent American releases. But the main pleasure of watching a Hong film comes from noting the way his stories subtly mutate and change before your eyes. Viewers recognize narrative patterns while also acknowledging little variations in familiar tropes, themes, and characters.

In "The Day After," Hong's surrogate is boorish book publisher Bongwan (Haehyo Kwon) is introduced to us through a disorienting series of narrative false starts. Bongwan is immediately kicked out of his comfort zone after he, in a four-minute introductory long take, is confronted by his unhappy wife Haejoo (Yunhee Cho). This is the best scene in the film because it's the most alienating: just four uninterrupted minutes of unyielding deflections from Kwon as he refuses to outright answer his character's wife when she repeatedly asks: are you seeing another woman?

Bongwan goes for a walk following this non-starter of a confrontation, and his mind wanders with him. He visits his meek lover Changsook (Saebyuk Kim) and then imagines (or perhaps recalls?) a scene on the bus where he and Changsook are holding each other's hands. Then he goes to work, where he welcomes under-developed heroine Areum (Minhee Kim), his new assistant. But Haejoo soon barges in and accuses Areum of being her husband's mistress (mostly because Changsook was, until recently, Bongwan's assistant). A typically cringe-worthy confrontation ensues, but Areum shrugs it off. Still, it soon becomes clear that Haejoo isn't going anywhere. Bongwan, on some level, knows that he must make a decision, a conclusion that is only confirmed by a philosophical lunchtime conversation that he and Areum have that give him more questions to answer like: is Bongwan brave enough to commit to his ideals, or will he continue to accept an unhappy status quo because cynicism is easier than a little discomfort? (more on this conversation shortly)

At this point, Hong's narrative becomes a kind of self-conscious arthouse soap opera. He recycles the same musical cue three or four times, always when a character is on the verge of a breakthrough. But there is no resolution in sight for Bongwan since he refuses to make one for himself. Every so often, you'll hear a tinny synthesizer playing the same strain of music, as if sampling a missing track from Angelo Badalamenti's "Twin Peaks" score. But unlike Badalamenti's music, Hong's music cue only deflates the melodramatic elements on-screen. The music plays while characters cry, turn their back on each other, and walk away. But then the music eventually fades out, and normal life resumes.

But so what? Why is this personal art—Hong is, in real life, having a highly-publicized affair with Minhee Kim—necessarily good? As usual, Hong's actors deliver believably awkward performances. But the film's naturalistic rhythm and gorgeous black-and-white photography don't add much depth to an inherently soapy plot. If anything, Bongwan's stasis is an artistic feint akin to the kid who writes an essay or poem about his writer's block: it's a cop-out, but it's done with a wink, so it's ostensibly OK. Hong even acknowledges this when Areum and Bongwan most clearly articulate their temperamental differences during the above-mentioned lunchtime conversation. Bongwan, now jaded, desperately asks Areum how she could be so optimistic. "I just try" she replies. "I know I should believe, so I do." She is pure in his eyes, so she wins Hong's unbeatable game by forfeiting. I'd advise Hong fans to do the same, and just wait for his next effort, which will probably be out in a couple of months. 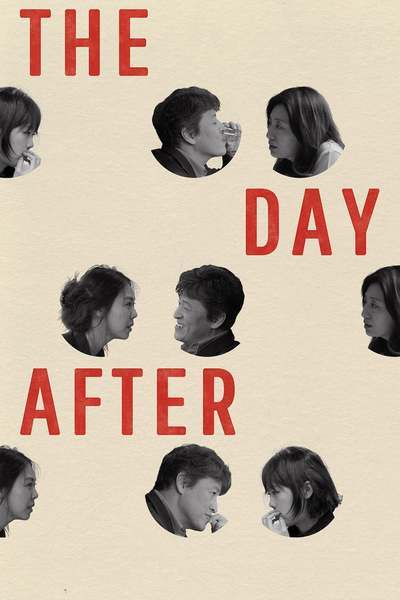