Repetition and pattern recognition are the cornerstones of South Korean filmmaker Hong Sang-soo's films. Hong's characters are often defined by their routines—drinking, awkward flirtation, boozy insults, repeat—because they generally reflect their creator's interest in the possibility and value of honest communication between men and women. In this context, Hong's punch-drunk meta-comedy "Claire's Camera," a minor smash hit at last year's Cannes Film Festival (where the film played out of competition), looks pretty standard. In fact, the first two-thirds of "Claire's Camera"—in which naive personal assistant Manhee (Min-hee Kim, Hong's real-life partner) tries to make sense of a catastrophic, sudden split with filmmaker Wansoo So (Jin-young Jung)—bring out the best in Hong ("The Day He Arrives," "On the Beach At Night Alone").

But the last third suggests that Hong's typical drive towards half-serious introspection is largely motivated by self-pity. What starts as a woozy comedy about art's potential for greater understanding between artist and subject eventually devolves into a navel-gazing doodle. Even the female characters are only strong because their male creator hates himself for mistrusting them.

The pitiable conclusion to Hong's deceptively heady 71-minute self-portrait wouldn't be so upsetting if Manhee wasn't constantly idolized as a character of rare honesty. Manhee's knack for blunt but honest conversation is apparent from her first discussion with her petty film distributor boss Yanghye (Mi-hee Chang). Yanghye knows that Manhee has slept with director So, and now wants to fire her. Which is kinda dumb, since Manhee has a reputation for being a hard worker, and has already arrived at Cannes in order to help Yanghye screen So's new film.

But Yanghye is too proud to say what's on her mind. She beats around the bush, and insinuates that Manhee knows what she's done, and how it makes her untrustworthy and dishonest. But Manhee doesn't know any such thing. She begs Yanghye to tell her what's done wrong, presumably because she doesn't think that having a one-night-stand with So is such a grievous act of betrayal. Still, Yanghye calls the shots, so Manhee gets the sack.

Enter Claire (Isabelle Huppert), a French teacher on vacation in Cannes. Claire first stumbles into So, then Manhee, then So and Yanghye together, and finally Manhee alone again. This accidental pattern allows Claire to see all sides of Manhee's frustrated romantic/work relationship.

For Hong, Claire's role as Manhee's judge and companion is perfect since Claire is also an artist (though she doesn't think of herself as such). She certainly talks like an artist, especially when she observes that people change after you take their photograph. Claire can't really explain that knotty concept, but she does try to approximate the same feeling of intimacy that a photographer and her subject can share by asking So to look deep into her eyes. He does, but still doesn't get it, presumably because he's too self-involved to see beyond himself. Still, the idea of honest communication lingers over the rest of the film, and gives it a kind of intellectual weight. How do you talk to people honestly if you're afraid of saying what you mean? And is honesty that more important than courtesy? Which would you rather be: right or right-minded?

These questions dance along the surface of Hong's comedy for a while, as in a scene where So and Yanghye try to have a difficult talk after he's gotten plastered. She wants to get back together with him, but he wants to make their relationship strictly professional. So he unconsciously mimics Claire, and tries to look at Yanghye honestly. Without thinking, he blurts out a compliment: she still looks beautiful. This briefly disarms Yanghye, and softens her up. But the moment passes, and she grows more desperate for his affection: can't they turn things around? Not really, but at least it's worth talking about, right?

Claire and Manhee also bond in several scenes that confirm Manhee's status as Hong's free-spirited muse. She gives freely of herself, and is quick to trust, as we see when she volunteers to cook for Claire minutes after they meet. She also refuses to censor herself, as we see when Claire, a kindred spirit, makes an off-the-cuff remark about a male colleague's "feminine face." This line strangely cuts to the heart of Hong's comedy: what good is being honest when the only things you have to say are trivial? "Claire's Camera" is, like many of Hong's best comedies before it, amusing without necessarily being laugh-out-loud funny.

Unfortunately, So inevitably confronts Manhee, and repositions her quest for independence a reflection of Hong's neediness (in real life, Hong and Kim are having a very public affair since Hong's wife refuses to grant him a divorce). So concern-trolls Manhee about the revealing nature of her shorts, and insists that she should know better since her clothes will only attract the wrong kind of attention. And for a moment, almost everything in "Claire's Camera" snaps into focus. Even the seemingly random recurring appearance of a big, friendly stray dog makes more sense: this is the dumb, emotionally disengaged animal that Hong wishes he could be. You don't need to care about honest communication, or emotional filters if you're just a lovable animal that everybody—especially Manhee and Claire—finds instantly attractive. Manhee's post-So life goes on uneventfully, as Hong confirms during the film's matter-of-fact, dialogue-free final scene. But that shrug of a conclusion feels like a slap in the face: forget about all that introspection stuff. Move on, show's over, nobody cares. 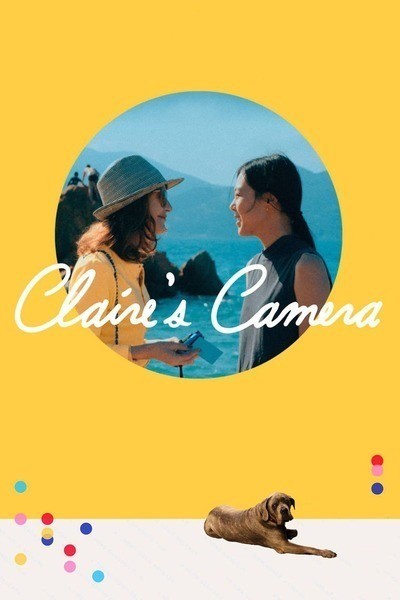