I get letters from people who would like to make a movie. My advice could be, find a subject like Speed Levitch and follow him around with a video camera. That's what Bennett Miller did--directing, producing and photographing "The Cruise." Levitch (who has now retired and gives private tours) became a legend in the New York bus tour universe in the mid-1990s; customers, far from being confused by his curious rants, recommended his tours to one another. That makes a kind of sense. You can see buildings anywhere, but Levitch is the kind of sight perhaps only New York could engender.

"I went to double-decker buses to meet and seduce women," he says. It didn't work (maybe because of homelessness, a Goodwill wardrobe and a flat-footed duckwalk?). Now he sees that "every double-decker loop is a loop toward my death." He's not just a cheerful clown; there's a strange dark undertow that we sense beneath lines like, "Eleven people have jumped off this bridge and survived. One of my cruising dreams would be to get those people together on a cruise." Around and around the city he cruises by land, driven mad by the repetition of the spiel, but not as mad as some guides, since he feels free to comment at length on sights the passengers cannot even see. There is something more to him, we feel, and deeper, than this colorful showoff. A story not told. Like Tiny Tim, he gives the sense of a man whose only home is his personality. "I was re-emerged into my own naivete," he explains. 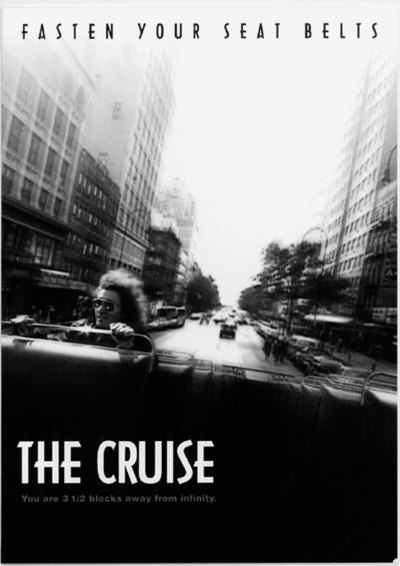 Rated NR Intended For Adults, But Nothing Particularly Objectionable

Directed, Produced and Photographed by