There are many nods, visual and otherwise, to the original 1996 film "The Craft" in Zoe Lister-Jones' remake "The Craft: Legacy." Lister-Jones knows the terrain well and has a lot of affection for the original. She's not alone! "The Craft"'s fanbase is passionate. The film captured the vibe of the era, all that mid-'90s emo-riot-grrrl-anti-social angst (plus a great soundtrack). "The Craft: Legacy" stays with the structure of the original but digs in deeper to the "love spell" plot, which plays a relatively minor role in the original. The "craft" part of things takes a backseat in "Legacy," as various social and emotional-sexual issues are explored. This, ironically, is the most interesting part of the film. Because the "witchcraft" part is treated mostly as a fun thing to do at slumber parties, there are very few frightening sequences (as compared to the often-unnerving original). The result is a confused movie.

Lily (Cailee Spaeny) and her mother Helen (Michelle Monaghan) move across the country because mom's fallen in love with a new guy named Adam (David Duchovny). Helen, quivering with new-love excitement, pleads with her serious daughter to give it a chance. Mom lacks boundaries. Mom can't see the red flags in this Adam guy. Adam lives with his three teenage sons in a gigantic creepy house that looks like one of the sets for "Lion in Winter." Lily's new room is the size of a small condo. There are stained glass windows and family crests and wooden staircases. Adam seems friendly, but one glance at the title of his best-selling book (The Hallowed Masculine) makes Lily nervous. Adam holds workshops for men in the cavernous living room where he says things like "We as men need to alchemize weakness into sovereign power." (Duchovny gives a very funny performance. He plays it totally straight.) There are weird undercurrents all around.

Lily's first day of school does not go well. She gets her period unexpectedly and a cruel yet gorgeous kid named Timmy (Nicholas Galitzine) mocks her for it. A trio of girls—Tabby (Lovie Simone), Lourdes (Zoey Luna) and Frankie (Gideon Adlon)—find her crying in the restroom, and help her out. They have been looking for a "fourth" to complete their coven, and they sense Lily's witchy powers. Before you know it, the foursome are wreaking havoc at their high school. They concoct a daring spell to make Timmy a nicer person. Suddenly mean bully Timmy is lecturing other kids about "consent" and using words like "cisgender" and "heteronormative." He declares his love for Princess Nokia, especially "her politics." The girls look on, awe-struck at their own success.

"The Craft: Legacy" gets sidetracked with the Timmy sub-plot, and the film morphs into a teenage soap opera and/or ABC Afterschool Special. Spellbound Timmy has a secret, which he reveals to the four girls, who have become his new best friends. Lily is attracted to "woke Timmy." Things are complicated. Timmy is best friends with one of Adam's glowering sons. How do Timmy's old friends respond to the new him? How do his parents? This whole section is engaging, funny, inventive, while also managing to be a sharp critique of the restrictions placed on boys (also reflected in how Adam parents his sons.) Timmy says at one point, "It's hard for dudes. There's no room to be." Alongside Adam's toxic talking-points about the "crisis of masculinity," you could say this is what "Legacy" is really about.

One of the main problems is that, excluding Lily, the girls are not clearly delineated as characters. You have no clue where these girls live, who their parents are, their histories, backstories, even their likes or dislikes. The only time we get a glimpse is during a brief scene where they play a truth-telling game. "I wish I had more black friends," says Tabby, an intriguing comment, but just ... left there, unexplored. Lourdes is trans, but other than that, we don't know anything about her. Home life? Struggles? In the 1996 film, each girl was three-dimensional, with flaws and wants and desires, each of which drew her inexorably into the supernatural. The actors here are all charming and funny, but they don't land as distinct individuals. What are they looking for when they cast spells? What is lacking in their lives? Are they running from something? Trying to fill a hole? Or is it just schoolgirl shenanigans? It's hard to tell. Except for one conversation about "using their power responsibly,” there’s no real grappling with what power means, how power corrupts all of us. Consider how Neve Campbell's bullied character in the original turns into a mean-girl bully herself once she gets power into her hands. "The Craft: Legacy" is uninterested in that kind of complex examination.

The original film ended on a very disturbing note: an overhead shot of Fairuza Balk's Nancy, strapped to a bed in a mental institution, writhing around in anguish at what she had unleashed. Her walk on the dark side was too dark; she couldn't find her way back. This sense of danger—emotional, physical, spiritual—is missing in "Legacy," as is a sense of what's at stake. 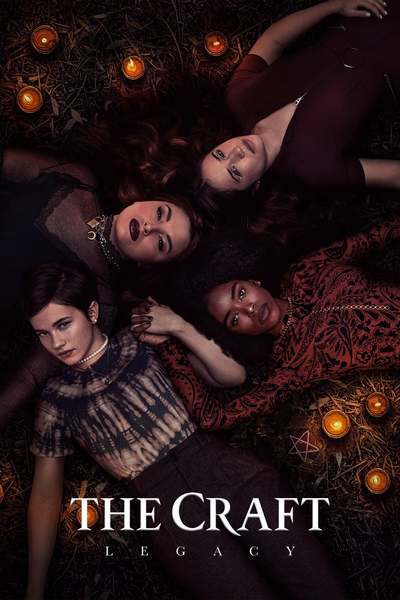