Small-town living has a specific kind of rhythm. Everyone knows everyone else, and everyone knows each other’s families. Everyone shops at the same places, and everyone is part of the same organizations. It can be comforting, or it can be stifling, and the tension between smallness as intimacy and smallness as suffocation is considered by director Grímur Hákonarson in “The County.”

Set in rural Iceland, “The County” unfurls as if Ken Loach found himself near the Arctic Circle, looked around at the myriad villages and struggling farms, and thought, “Hm, I wonder if there is a labor struggle to found here!” There is. Inga (Arndís Hrönn Egilsdóttir) and her husband Reynir (Hinrik Ólafsson) have run a struggling dairy farm for years. It was Reynir’s dream to take over his parents’ family farm, Dalsmynni, and so that is what he and Inga do. It is endless, backbreaking work. Inga midwifes a calf in the morning, pulling the baby by its hooves outside of its mother’s body and then checking that both are OK; then she checks their robotic milking system to make sure that it’s functioning correctly; then she goes over the books. Reynir delivers hay, tends to the field, and also listens while Inga rightfully worries that although they’re working themselves to the bone, the farm is practically bankrupt anyway.

It’s been three years since their last vacation. Their children moved south years ago, and have their own families and their own lives, and don’t help with the farm. And when Inga wonders if they could save some money by ordering fertilizer and other supplies from companies closer to Iceland’s capital Reykjavík, Reynir reminds her: They are part of the county co-op. Run by co-op leader Eyjólfur (Sigurður Sigurjónsson), the collective doesn’t allow its members to shop outside of itself. They have to buy everything they need from the co-op, and also sell their products to the co-op. The stern, condescending Eyjólfur is unwavering on this: “If you belong to the co-op, you’re part of the communal whole.” But what good has the co-op been lately, when their prices are so expensive, they have the county in a stranglehold, and farmers like Inga and Reynir are barely scraping by?

When tragedy hits Dalsmynni, “The County” shifts into David vs. Goliath mode, a la the likes of “Erin Brockovich.” As Inga and Eyjólfur move against each other, Egilsdóttir’s performance takes on an admirable flintiness. She has a tendency to react in anger, frustration, or resentment, but she also has a strong sense of right and wrong, and the gumption to act in her own defense. A post she makes on Facebook about the co-op’s business practices is as brave as her cocking a shotgun and facing off against men who come to vandalize her home: the former, done with a squint and a quick click of her mouse, while the latter is punctuated by an emphatically opened door, a step out into the cold night, and the wide arc swung by her gun.

Egilsdóttir has an open, expressive face that reflects her state of mind, shifting between agony, irritation, and pride as befits each scene. She’s well-countered by the more mannered Sigurjónsson, who uses politeness and orderliness as a defense for his own more devious acts. Where “The County” falters a bit, though, is in telegraphing certain characters’ villainy so early on that the questions of political ideology that the film then explores are already swayed a certain way. Not to get into a “both sides” argument, but “The County” pursues two storylines: one a character-driven story about Inga’s desire for justice; the other a larger-scale exploration of economic practices and bureaucratic power within a contained community. By tipping its hand so fully toward Inga’s storyline and securing our sympathy in that vein, “The County” shortchanges the latter idea. What benefits does a co-op provide? What security did it initially provide to these people, and this place?

Perhaps that’s my own “the collective is always good!” bias showing, and to be fair, “The County” doesn’t have to abide by anyone’s political ideas but its own. Nevertheless, a desire for a more fully rounded depiction doesn’t detract from the other strong elements of Hákonarson’s film, in particular how methodically “The County” reminds us of the agricultural backbone of our way of life, and of how narrowly these workers survive in providing their labor to us. “The revolutionary herself,” someone says of Inga, and “The County” is at its best when it centers Egilsdóttir’s nuanced performance. 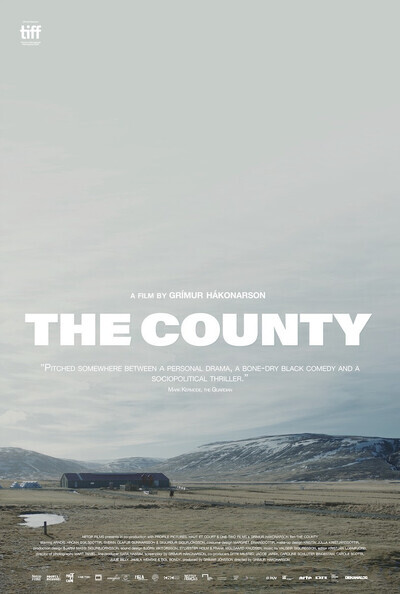