"The Changeover," about a teenage girl trying to save her kid brother after he's captured by a malevolent creature, is a coming-of-age drama, a horror movie, and a "hero's journey" film, rolled into one grandly entertaining package. It's creepy, moving, and ultimately inspirational, and its more disturbing images stick in the mind. It's the kind of movie that could become a sleeper hit if it had marketing muscle behind it, but alas, it doesn't; it's an independent film that's opening this week on a handful of screens in North America after playing Australia and New Zealand months earlier. It's worth seeking out no matter how much trouble you have to go to, because it's special: assured but modest, full of surprises. It doesn't go the way you expect it to, and yet in retrospect each move seems inevitable, like the incremental fulfillment of a prophecy.

The heroine and narrator, Laura Chant (Erana James), is a Christchurch, New Zealand teenager living with her single mother Kate (Melanie Lynskey) and her adorable kid brother Jacko (Benji Purchase) in the aftermath of an earthquake. She has otherworldly powers, but they're undeveloped and largely unacknowledged by her. We glimpse them in the movie's early narrated sequences (which suggest a nonexistent Terrence Malick horror film) and in moments when she seems to communicate telepathically with a handsome but unnervingly intense classmate named Sorensen Carlisle (Nicholas Galitzine).

The story kicks into gear when Carmody Braque (Timothy Spall), a soft-spoken loner who lives in the local rail yard, befriends Jacko, inviting him into the trailer where he stores his prize collection of dolls and stuffed animals. Carmody is an affable fellow, and Spall plays him in a way that keeps both Laura and the audience off-balance: at first it's hard to tell if he's truly dangerous or if it's our paranoid imagination assuming the worst. A key theme established early by co-directors Miranda Harcourt and Stuart McKenzie is the importance of young people, girls especially, learning to trust that inner voice that tells you that you're in danger, even when the person triggering that alarm—and perhaps the society that enfolds all of us—is insisting that everything is okay. Even the heroine's mother gaslights her, though of course without meaning to; Lynskey plays her as a woman who only wants what's best for her children, based on her own understanding of reality.

Carmody is, in fact, a very bad man. He declares himself Jacko's special friend and caretaker, lures him back to his hideout, and marks him with an ink stamp that lets him enter the boy's soul and control him like a puppet.

Did you get a chill just now? I did, and I've already seen the movie.

From there, "The Changeover" becomes a kind of supernatural detective story, with Laura feeling guilty over disregarding that voice and letting Carmody...well, "violate" is a strong word, but what happens between him and Jacko absolutely feels like a violation—an unholy breach of trust between adult and child. It's not physical or sexual abuse by any traditional definition if the phrase, but feels somehow equally vile. Carmody makes it clear that he's been doing this kind of thing for a long time (an early Freudian slip refers to an event that happened a thousand years ago) and will continue doing it because no one is strong enough to stop him.

To rescue her brother, Laura has to mold her powers and battle Carmody. That requires her to get close to Sorensen, his mother (Lucy Lawless), and his grandmother (Kate Harcourt), a family of special people who have mastered their own abilities. (I'm being vague here about the nature of the heroes' and villain's powers, because the exact way in which "The Changeover" fits into established mythologies is part of what makes it fun.) Laura also has to overcome her paralyzing fear of Carmody, who's like one of those small-town devils from a "Twilight Zone" episode or Stephen King story. Most of all, she must learn to accept herself as an autonomous adult, not a girl who's content to be molded and directed.

There are elements of feminist empowerment fantasy in "The Changeover." The title not-too-subtly hints at a crossing-over from girlhood to womanhood, and the moon plays a role in the story. There are times when the film feels like a light-magic version of "Carrie" in which an alienated female loner unleashes her dormant power in a way that's righteous rather than nihilistically destructive. Laura is a decent person at heart, and it's stirring to watch her grow into a defender of people who can't defend themselves. Children most of all.

The filmmakers communicate all of this information through an aesthetic that feels right for the setting, tone, and themes. When uncanny events happen, they're presented matter-of-factly, like the simply rendered, theatrical time/space shifts in movies like "Eternal Sunshine of the Spotless Mind" and "Being John Malkovich." The creative choices affirm the idea of non-human or superhuman beings living in a real world, beneath or beyond our notice.

Cinematographer Andrew Stroud composes the film in delicate, handheld, very wide images. Many of these are shot quite close, as in a kitchen sink indie drama where the important information is conveyed through silent reactions. The sound design (supervised by Melanie Graham) buries important information pretty deep in the mix. You have to learn how to watch and listen to this film because it's not going to hand you everything that's important. That puts you in the same position as Laura, who has the ability to master all of her troubles, but has to learn to trust her instincts and ability first.

"The Changeover" is one of those films that has to clear a couple of hurdles when you recommend it. First, you have to get past "I've never heard of it"—an understandable hiccup, considering that its a modestly budgeted independent movie, adapted from a 35-year-old book by New Zealand writer Margaret Mahy that would've been classified as "Young Adult" had the label had existed then. Next comes "Who's in it?" The answer is, "No big stars," unless you count the once and future Xena, Lucy Lawless, who's only in a few scenes. The rest of the cast consists of established character actors and young performers getting their big breaks. But every role is perfectly cast, every performance perfectly modulated, the writing, direction and technical credits are spot-on, and the story's resolution is stirring and satisfying, leaving just enough loose ends dangling to justify a sequel.

In its own modest way, this is a perfect genre film. 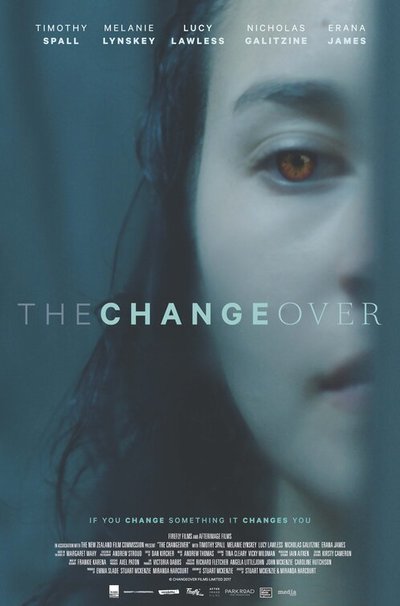