The Catcher Was a Spy

Paul Rudd isn't necessarily the first actor you think of when you hear the phrase "strong, silent type," but that's how he's been cast in "The Catcher Was a Spy." This film from director Ben Lewin and writer Robert Rodat ("Saving Private Ryan") is biographical drama about Morris "Moe" Berg, an unremarkable major league catcher who went on to work for Office of Strategic Services, the precursor to the Central Intelligence Agency, during World War II. At one point during his espionage career, Berg found himself under orders to assassinate German theoretical physicist Werner Heisenberg (Mark Strong) if he determined that Heisenberg and his associates were on the verge of making an atom bomb for Hitler. This is where the tale begins, in flashback—a suitably audacious opening for a film about a mysterious man.

The real-life inspiration for this character is so fascinating that if you start reading about him, you'll find yourself tumbling down one research rabbit hole after another. Berg was described by Casey Stengel as "the strangest man ever to play baseball" and by John Kieran, a former sports columnist for the New York Times, as "The most scholarly athlete I ever knew." Born in Manhattan but raised in Newark, New Jersey, Berg graduated from Princeton—quite an accomplishment for a young Jewish man in the anti-Semitic Ivy League university system—and went on to play for a number of minor and major league teams, including the Cleveland Indians, the Washington Senators, and the Boston Red Sox.

In 1934, Berg made the second of two trips to Japan as part of a baseball players' delegation and filmed Tokyo harbor with a movie camera. While it seems unclear whether this was actually a precursor to Berg's espionage activities, the film treats it that way, and the trip sets up some thoughtful conversations between Berg and Japanese delegate Isao Kawabata (Hiroyuki Sanada) about the likelihood of war between their two countries. Berg was thought to be gay, although the movie never quite confirms that he was; it shows him having sex with his girlfriend Estella Huni (Sienna Miller) but holding hands with Kawabata, an intellectual with whom he clearly has a deeper connection.

Unfortunately, the film never finds a way into Berg's personality that explores his many facets without reducing him to a blank-slate character at the center of a traditionally-made period thriller. And while Rudd is a likeable performer who turned out to have more range than anyone might have predicted from seeing him in early roles, he didn't do much for me here. As many times as the supporting characters, including the adoring but frustrated Estella, describe Berg as a riddle or enigma, the character remains a closed book, a personality type that's difficult to portray, because it requires the actor to continually tease the possibility of revelation without giving audiences the answers they seek. There aren't too many actors you'll watch for 98 minutes even when they're purposefully giving you very little, and I don't think Rudd, who becomes a superstar whenever he grins and delivers a deadpan wisecrack, is one of them. (Others have praised Rudd as Berg—and of course, your mileage will vary.)

Rudd does a fine job of capturing the character's casual coldness, starting in an early scene where he tells Estella that he's traveling to Japan; when she says she's always wanted to see Japan, he smiles subtly and says, "I'll take pictures." And he's credible as an intellectual who holds intolerant or less-educated people in mild contempt, but manages to keep it in check when he has to. We definitely get the sense that Berg is a restless spirit, possibly driven by a desire to prove himself to a gentile-dominated world by being smarter and more athletic than most of the goys ordering him around. But except in certain scenes, such as a brutal alleyway beating that Berg inflicts on a homophobic teammate, a certain necessary dark fire is missing from the character and the performance, and it's hard to tell if this is due to miscasting, insufficiently imaginative writing and direction, or something else. The cinematography, production design, costumes and music are all superb, but the direction doesn't do much more than showcase them, rarely reaching for an expressionist or surreal touch that might've given us a glimpse of Berg's emotional interior, however fleeting.

The supporting cast is a sterling lineup of character actors, including Guy Pearce as U.S. military specialist Robert Furman, Paul Giamatti as Dutch-American physicist Samuel Goudsmit, Jeff Daniels as OSS director William J. Donovan, and Shea Whigham as Red Sox manager Joe Cronin, who wants Berg to quit playing and become a coach (he did, eventually). But none have more than a scene or two, and to greater or lesser degrees, they're all playing a variation of poor Estella, who just wants to find a way into the mind and heart of this complicated, charismatic, but closed-off man.

How to you keep people interested in a human question mark? I don't know. I wouldn't hazard any suggestions of how "The Catcher was a Spy" should've done things instead. I can only say that I'm sympathetic to the impossible conundrum that the filmmakers willingly waded into here, one that only a handful of films, including "Lawrence of Arabia" and "The Last Emperor" (and TV's "Mad Men," which cheated a bit and gave us flashbacks and dream sequences that filled in the main character's secret history) managed to solve, or at least work around. I crave the sorts of experiences that this movie wants to provide. I wish I liked it more. 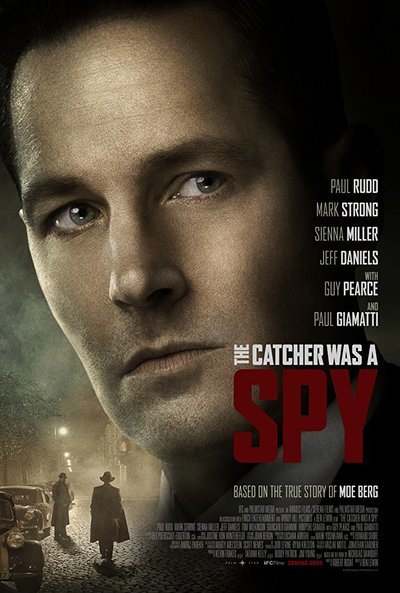