Although I have no special inside knowledge regarding the creation of “The Bye Bye Man,” I can harbor a fairly strong guess as to how it came about. A group of ambitious filmmakers gathered together with the express purpose of creating a truly unique horror film that would uphold the great traditions of the genre while still striking off in new and unexpected directions. After a couple of hours, they decided that was just too hard and chose instead to slap together a bunch of ideas shamelessly cribbed from other movies, and mix them together into a cinematic shrug of indifference that seems custom-made to be presented in empty theaters in the dead of January. At least I hope that’s how it came to be. To think that everyone here intended to make a movie this utterly lifeless and banal from the outset is infinitely more frightening than anything presented on screen.

Following the usual prologue chronicling a horrible event that will eventually be sort of explained, the film turns its focus to a trio of Wisconsin college students—Elliot (Douglas Smith), his girlfriend Sasha (Cressida Bonas) and his best pal John (Lucien Laviscount)—as they move in together off-campus in a run-down old house that they are somehow able to afford to rent even though it appear to be slightly roomier than the Overlook Hotel. Alas, they have barely settled in when weird things begin to happen. A classmate of Sasha’s offers to do a psychic cleansing of the place and senses a lot of bad mojo. Elliot begins hearing weird noises and is convinced that John is trying to steal Sasha from him. Sasha begins to develop an alarming cough. (To be fair, this just might be the inevitable resulting of spending the winter in Wisconsin.) A nightstand is found with the phrase “Don’t Say It. Don’t Think It” scribbled repeatedly inside of it along with a reference to something known as The Bye Bye Man.

As the weirdness continues, Elliot begins to investigate what is going on with him and his friends. With the help of perhaps the most overly solicitous librarian (Cleo King) in screen history, he finally gets to the bottom of things. Apparently, the Bye Bye Man is a malevolent spirit that can be summoned simply by speaking his name only once—when that happens, it gets into your mind and causes its victims to see things that aren’t really there as a way of driving them to madness and murder. This is clearly an unstoppable force with unimaginable powers and therefore it only takes Elliot a few minutes before he figures out a way to fight it off. But will it be enough to help save him and his friends? More importantly, is there any chance that they will be able to get their security deposit back as well? (You may laugh, but the scariest line of dialogue is when Sasha complains to the guy they are renting from about all the weird things going on and he replies, “You did sign a lease.”)

Though I cannot imagine anyone with more than a few functioning brain cells being particularly shocked by this revelation, “The Bye Bye Man” is pretty much as lame as can be—a film that is alternately far too silly to work as a horror film and far too boring to succeed as camp. The screenplay by Jonathan Penner is notable only for its utter slovenliness—the scares are predictable, the backstory is banal and the various rules regarding the Bye Bye Man and the scope of its powers are explained so poorly that viewers are more likely to be confused than frightened. As for the allegedly terrifying visions—which are supposed to be so horrifying as to drive their victims to madness yet still somehow conform to the parameters of a PG-13 rating—they are executed by director Stacey Title in the most indifferent manner imaginable. To be fair, there was one moment featuring the characters wandering through a bleak, chilly and unforgiving landscape that initially struck me as highly creepy and disturbing until I realized that it was supposed to be just an ordinary day in Wisconsin.

Speaking of the characters, they are as bland and uninteresting as can be. The most notable thing about Elliot is the collection of freshly laundered punk rock T-shirts that he wears throughout to symbolize his apparent edginess, and the performances by the three young leads are equally forgettable. The only notable performances in the film are the brief but bizarre turns contributed by the only two familiar names in the cast, both of whom pop up in the final third. Carrie-Anne Moss appears as one of the less convincing tough-talking cops in recent memory, though you get the sense that she realizes just how preposterous the whole thing is. And in the inevitable role of the weird old woman who turns up just before the climax to sort of explain to everyone what is going on, the one and only Faye Dunaway. Like everything else in the film, this particular scene is dumb as can be but it at least generates some degree of tension by inspiring viewers to wonder, “What the hell is Faye Dunaway doing in this?” My guess—Lin Shaye was already booked.

Both as a straightforward horror exercise and a look at the perils revolving around off-campus housing in Wisconsin, “The Bye Bye Man” is the kind of film that is so boring and bereft of anything of possible interest that it becomes infuriating. By the way, as it turns out, the only way to resist the Bye Bye Man is to refuse to say his name or think about him at all, the theory being that the less important he becomes in the minds of his potential victims, the less powerful he becomes. If you go to the movies this weekend, why not test this theory by refusing to speak his name at all, especially when you get to the head of the ticket line. You can help prevent a malignant force from claiming more victims and, perhaps even more importantly, prevent the possibility of “The Bye Bye Man II.” 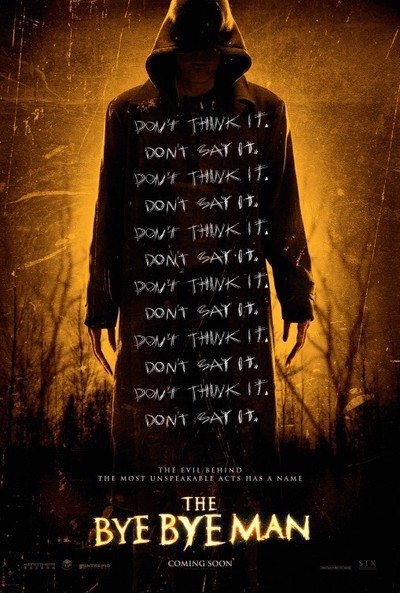 Writer (based on "The Bridge to Body Island" by)