If you dare to forage beyond the backstabbing mean girls of “Bride Wars”-like fare, movies on true female friendships are a staggering scarcity, at least in mainstream cinema. So rare that when you see an indie about a mutually committed, zesty duo like Mel and Jen—respectively portrayed by sharp-humored New Zealander comedians Madeleine Sami and Jackie van Beek—you take immediate note of its quiet rebellion. Not that the thirty-to-fortysomething ladies of “The Breaker Upperers,” a marvelously kooky, occasionally laugh-out-loud funny buddy comedy, haven’t had their own share of rivalry once upon a time, after learning that the same romantic interest (Cohen Holloway) played them both behind their backs over a decade ago. But instead of turning that analogous heartbreak into enmity, the savvy women joined forces and launched a questionably lucrative venture of, well, breaking couples apart. If you have always dreaded an awkward break-up conversation with your significant other that would set you free from a dysfunctional relationship, these cynical business partners and their ethically dubious methods might just be your remedy.

We meet Mel and Jen in alarmingly fake-looking cop uniforms, sitting around the kitchen table of a respectable suburban home while the grieving fresh widow Anna (Celia Pacquola) sobs about her deceased husband. Or so she thinks; as the cowardly man had apparently decided to continue his life elsewhere and hired the services of Mel and Jen to deliver the news of his make-believe drowning. This case serves as our introduction to the work of these eccentric, equal-opportunity home-wreckers—they interfere with both straight and gay couples, offering them customized packages like “the other woman”— who hilariously move from case to heartbreaking case with the cruel efficiency of an “it’s not you, it’s me” ex.

While it’s hard to explain how the pair’s morally bankrupt schemes continually birth uproarious circumstances—and there are many throughout “The Breaker Upperers”—rest assured that the otherworldly Kiwi sense of humor of Sami and van Beek (also the writer/directors of the film) clicks into place in due course. It’s a wry type of wit cemented in their remote island—much drier than the comedy of a Paul Feig film and light-years more sophisticated than anything on SNL. (It’s no coincidence that Taika Waititi, who comes from the same discipline of comedy, executive produced the film). But perhaps the greatest reward of “The Breaker Upperers” is the journey its many absurdities take—they mature alongside Mel and Jen, who discover both a renewed sense of camaraderie and an awakening, guilty conscience in each other. What jumpstarts their advancement ironically happens to be a new breakup case, initiated by the loveable teenager Jordan (James Rolleston). Failing (or rather, fearing) to end his relationship with his tough girlfriend Sepa (Ana Scotney)—Jordan’s cryptic text emojis understandably get lost on her—Jordan resorts to our professionals to tame Sepa’s anger management issues and falls for Mel along the way.

Light on its feet but conceived with impressive care for its brand of quirk, “The Breaker Upperers” is embellished with various nostalgic, late ‘80s/early ‘90s references (Technotronic, Céline Dion and grungy fashions galore) as well as pointed but non-didactic observations on race, class and womanhood. Undaunted by silly physical comedy, foul-mouthed jokes and an array of sexually very active females—chief of them being Jen’s perennially sex-hungry socialite of a mother Shona (Rima Te Wiata, exceptional), who acts like she’s casually wandered off “Boogie Nights” and landed here—“The Breaker Upperers” is often a riot with its buffet of straight-faced goofballs with average smarts. The film’s ending might be a bit too tidy for its own good, but not since “For A Good Time, Call…” did a friendly, female-centric kiss-and-make-up feel this satisfying. 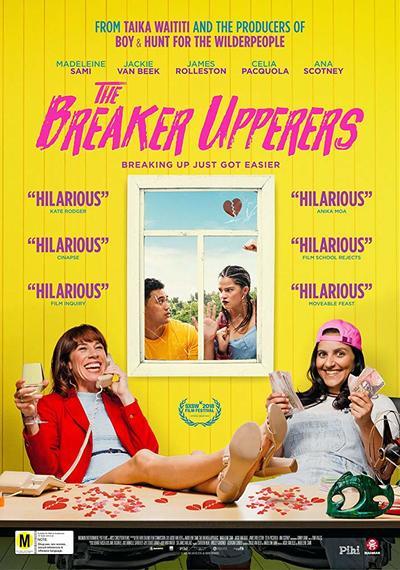