I don’t know anyone who looks forward to having surgery. But if a doctor ever suggests what seems to be a quicker and more convenient alternative that involves the use of a high-tech device, buyers beware. In fact, such shortcuts can ruin not just your health but destroy your life. A supposedly permanent birth-control solution for women can end up leaving tiny shards of metal permanently implanted in their bodies while setting off an explosion of autoimmune-related problems. A mesh support meant to counteract a woman’s sagging pelvic floor ends up embedding itself into body tissue while causing constant pain and bleeding. A supposedly miraculous robotic machine called da Vinci that is used to remotely perform hysterectomies can lead patients to possibly suffer from having their intestines and colons dangle out of their bodies.

That is the not-so-subtle message found in “The Bleeding Edge.” This unnerving medical documentary directed by Kirby Dick (“The Invisible War,” “The Hunting Ground”) plays like an all-too-real horror show that is ongoing for thousands of unwitting patients with meager relief in sight. But instead of just feeling compelled to cover your eyes, it might make you want to cross your legs, too. This sort of a situation is becoming scarily familiar at a time when federal regulations meant to safeguard our welfare are being yanked willy-nilly by executive orders. When it comes to government-enabled monsters, there is nothing more frightening than when a supposed watchdog group like the Federal Drug Administration falls under the sway of corporate greed as it endangers the very people they are supposed to protect. Namely, we the tax payers. Lawsuits with millions of dollars in payoffs have ensued but haven’t stopped the medical community from continuing to ensure a healthy cash flow by promoting the use of these defective devices. While Environmental Protection Agency honcho Scott Pruitt’s ethical scandals finally forced him out of his position. But Trump-appointed FDA commissioner Scott Gottlieb was confirmed despite having huge conflicts of interest, given that he had worked at no fewer than 20 healthcare companies previously. His one concession was recusing himself from any decision involving his former employers for two years.

Apparently, this $400 billion industry is so addicted to promoting new-fangled gizmos and so eager to inflict them upon the public, it has been gifted with a huge and dangerous loophole that skirts any real accountability for their safety. Unlike drugs, which must be thoroughly tested before entering the marketplace, the new technology is essentially given a pass if it is deemed to be an upgrade to an old one, even if that model has since been recalled. That gives sellers free rein to cut corners and simply flood the marketplace with little proof of effectiveness. And they are in such a rush to line their pockets that hardly any effort is made to actually train doctors on how to properly use the devices without causing harm.

Granted, this lack of oversight has been in place long before the current administration took office. That was the case with one of the most egregious examples of such malpractice: Essure, a supposedly easy-peasy 45-minute procedure using invasive metal pins sent through reproductive system that was sold as a superior alternative to tubal ligation and touted as being 99.8 % effective in preventing pregnancies. Instead, it was often a one-way ticket to a constant medical misery, excruciating pain, the inability to have intercourse while being unreliable as a method of birth control.

This is neither the most cinematically entertaining nor the sexiest topic ever examined by what amounts to a Code Red warning sign of a public service announcement. But Dick and producers Amy Ziering and Amy Herdy know the value of focusing on a compelling collection of human subjects who generously relive their first-hand agony. There is Angie, a mail carrier from Western New York, whose ongoing Essure nightmare led her to create a Facebook forum for other sufferers. Then there is Ana, a mother of four young daughters, who is left destitute after losing her husband and her job because of the debilitating side effects of the same procedure. Then there is kindly Dr. Stephen Tower, an Alaskan orthopedist who suffered a frightening mental breakdown after getting a cobalt hip replacement and decided to do his own research into how the use of the metal was putting him and his patients at risk. As for tough Kentucky lady Tammy, her status as a nurse didn’t prevent her from being trapped in an ongoing vaginal mesh ordeal with 19 surgeries and counting.

Perhaps not surprisingly, no one from Bayer (the maker of Essure), Johnson & Johnson (which produces the vaginal mesh) or the FDA agreed to speak on camera. Instead, there’s a clip from an FDA meeting when Essure was initially granted approval, despite the lack of answers given to serious questions posed by physicians in attendance. But instead of expressing concern, attendees laugh since they know there are no barriers in the way.

We see Angie and three other members of her group visit congresswomen at the Capitol, who encourage them to become external forces protesting the lack of concern over Essure’s dangers. Instead of getting these defective so-called innovations off the market, they must settle for an assurance by the FDA that doctors are being encouraged to detail potential side effects with patients. Meanwhile, even though the device is no longer sold in the rest of the world, it is still in use in the United States—with 12,000 adverse events being reported to the FDA just last year. And, wouldn’t you know, Gottlieb has ties to New Enterprise Associates—which funded the development of Essure. Once again, buyers—and also voters—beware. 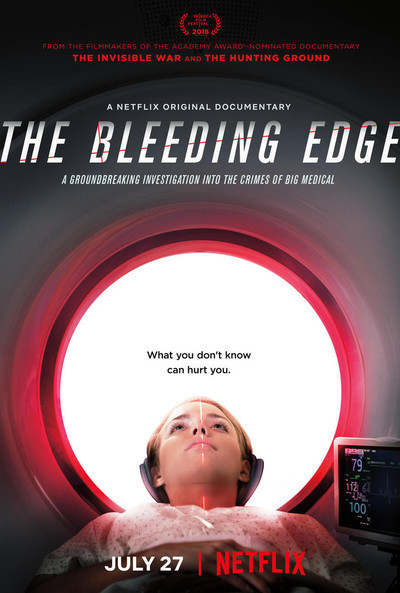