Steeped in heartache, trauma, and loss, Carlson Young’s “The Blazing World” is a bid by a wounded soul to find comfort and healing. Dripping in bright colors and bizarre imagery, Young takes her viewers on a journey through grief by way of an escapist fairy tale. But although the film’s many influences stand out, and its scope is clearly ambitious, "The Blazing World" doesn’t quite come together as a singular vision—it has numerous missteps that break its spell.

Young’s feature debut follows Margaret Winter (also Young), a college student coming home to her troubled parents, Tom (Dermot Mulroney) and Alice (Vinessa Shaw), and to the memories of her twin sister, who died during childhood after falling into the family’s pool. The Winters' mansion is large and cold with each person seeming to keep their distance in a different part of the house. Margaret seeks refuge in her room from her mother’s tears and her father’s violence. But soon a stranger (Udo Kier) beckons Margaret to another place, an alternate dimension where her sister still lives. Like the main characters of “Alice in Wonderland” or “Labyrinth,” Margaret follows her reality’s interloper to a new strange world beyond her wildest dreams—and nightmares.

“The Blazing World” only vaguely draws inspiration from Margaret Cavendish’s book of the same title. The book’s main idea, that there’s a world beyond our own, provides the jumping off point for what happens next. In this new dimension, there are tasks for Margaret to complete before she can reach her sister. The challenges bring her face-to-face with fantasy versions of her parents and fantastical interpretations of their problems. The disturbing fantasy realm becomes less of a place for hope of a future with her sister, and instead a place for Margaret to process her parental trauma.

However Young, who co-wrote the script with Pierce Brown, fails to build past this basic concept and instead fills the time with shots that seem self-indulgent. There are some moments when the camera lingers on her as she’s crying, fighting, or throwing a tantrum that begin to feel a little silly the longer the shots run. Their purpose is to give her time to shine, but Young’s performance does not rise to the occasion. Kier gives a quirky Goblin King-like performance as Lained, but even that’s not enough to redeem the movie. Cheap CGI effects and strange flashes to monsters and random close-ups weaken the movie even further. Shane F. Kelly’s neon-infused cinematography and Rodney Becker’s production design can’t distract from the on-screen cacophony, which includes the sounds of Young’s music producer and musician husband, Isom Innis.

The movie’s illusion starts to fall apart when imaging another world, but there are warning signs as early as its opening scenes. It's an indulgent sequence that really takes its time to build up to the tragedy, not unlike Lars von Trier’s “Antichrist” in spirit, but poorly paced and staged. There are other visual cues lifted from movies like Stanley Kubrick’s “The Shining,” like when the water comes pouring out like blood from the hotel elevator banks, and Guillermo del Toro's "Pan's Labyrinth," in the monster that flashes on-screen more than a few times. But “The Blazing World” also shares much in common with the aforementioned “Alice in Wonderland” and “Labyrinth.” They’re each about curious girls or teenagers finding themselves in a world unlike their own, sometimes using fantasy as an escape from the cold grips of reality. But those influences contain wide-eyed element of wonder that’s missing from “The Blazing World.” It’s less about curiosity and mystery than the harsh reality Margaret is dealing with.

“The Blazing World” falls short narratively and visually, not leaning hard enough into its stylistic possibilities to leave an impression past its opening credits. It’s fantasy for the sake of therapy, and there’s no romance or joy here in imagining a better realm. 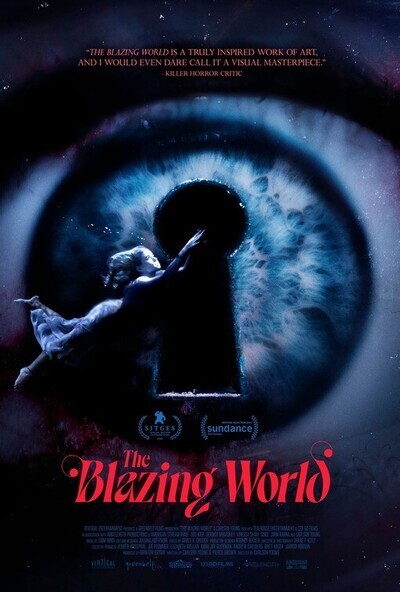