One thing I didn’t have on my lifetime cinematic bingo card—and I bet it is not on yours either—was Colin Farrell and Brendan Gleeson become the 21st century’s answer to Laurel and Hardy. And yet. With 2008’s “In Bruges,” and now “The Banshees of Inisherin,” the Irish actors, under the writing and directing aegis of frequently pleasantly perverse Martin McDonagh, display a chemistry and virtuosic interplay that recalls nothing so much as the maestros of the early 20th-century Comedy of Exasperation.

This being a McDonagh work, it’s a comedy of mortification as well as exasperation. It begins with a beautiful overhead shot of the title Irish island, all green below a clear blue sky (in this picture it only rains at night, which, considering actual weather patterns in Ireland, places the film in yet another genre, that of fantasy). The Carter Burwell score evokes idyllic times, and we see life is rather easy for Pádraic (Farrell) a milk farmer who lives with his sister in a modest cottage and, apparently, calls on his old friend Colm (Gleeson) just about every day at two. Before he sets out, he makes a remark about Colm to his sister Siobhán (Kerry Condon), who sarcastically replies, “Maybe he just don’t like you no more.”

This turns out to be a bit of inadvertent prophecy. Because Colm rebuffs Pádraic. Over the course of several discussions, we learn that Colm has come to find Pádraic dull (and the earnest fellow’s conversation is indeed limited, if amiable), and that he believes he’s got better things to do with his time, like compose songs on his fiddle. When Colm goes to confession at the island’s church, he reveals he’s also suffering from despair. He’s suffering from quite a bit more than that.

“Banshees” is set in 1923, and several times its characters discuss hearing guns going off on the not-too-far-away mainland. The conflict between Colm and Pádraic serves as a handy metaphor for Ireland’s Civil War at that time, but the movie works best when it doesn’t foreground that metaphor. Which becomes rather grisly, as a commentary on a particularly Irish kind of obstreperousness. As in: Colm tells Pádraic that if the latter continues to talk to Colm, or at Colm, after Colm’s made it clear that the doesn’t want Pádraic’s company or conversation, Colm will cut off one of his fingers. Now keep in mind that Colm’s a fiddler who wants to continue fiddling, so this is actually, as a strategy, a sight worse than cutting off one’s nose to spite his face.

And so, after Pádraic gets in Colm’s face again, Colm actually does it. One of the neatest tricks of the movie is how McDonagh leads the viewer to identify more with Colm than with Pádraic early on. One feels: yeah, this is a rude severing of friendship on Colm’s part, but why can’t Pádraic just let the guy be? Some of Colm’s points are well taken. Colm’s probably better for Pádraic than Dominic, the exceedingly rude policeman’s son who makes Pádraic look like an urbane conversationalist, but sometimes these are the breaks, social-life wise. But once the fingers begin coming off, your jaw slackens and your eyes pop. Where’s this going to end?

Nobody does self-loathing like the Irish, and with this film, McDonagh is on much surer footing than he was when trying to tell America a thing or two with his film “Three Billboards Outside Ebbing, Missouri” in 2017. “Banshees” has got touches of tenderness that are sometimes ever-so-slightly confounding, as when Colm shows care for Pádraic after the latter gets a pasting from Dominic’s bastard cop father. Being the writer he is, he often counters those with bracing reality checks. And as a director, he orchestrates the give-and-take between Farrell and Gleeson with the mastery of someone who appreciates these performers as much as discerning audiences do. They let it fly; Farrell does some of his best acting with his furrowed eyebrows; Gleeson has a glare that’s both a death-ray and an enigma. The pauses these guys enact are at times even funnier than the verbal comebacks McDonagh has come up with for them. And as it happens, Barry Keoghan as Dominic almost steals the movie out from under the leads, his very funny vulgar brashness never quite camouflaging his character’s poignant vulnerability. Very good show all around.

This review was filed from the world premiere at the Venice Film Festival. 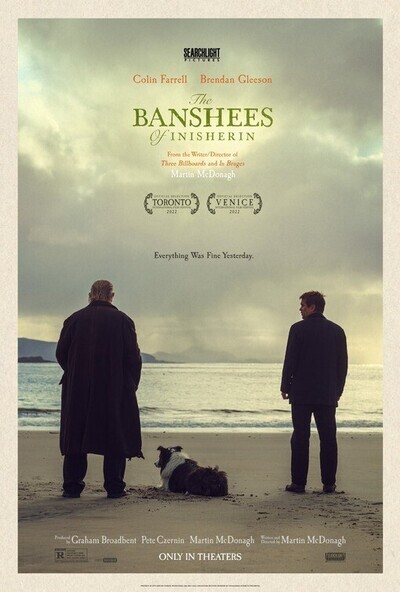 Rated R for language throughout, some violent content and brief graphic nudity.