The Ballad of Lefty Brown

This picture asks a question that I do not think is much on the mind of contemporary moviegoers: “What happens when a Western sidekick is suddenly bereft of his Western hero?” Can a hero’s journey withstand being undertook by Walter Brennan or Andy Devine?

We first see Edward Johnson and Lefty Brown in the dead of night, cornering a bad man and then taking care of him in a manner that Mrs. Johnson, late in the movie, will call “Eddie’s way.” Grizzled, mutton-chopped Lefty, a shambling kind of fellow most take to be incompetent, says to tall-in-the-saddle Johnson, “Helluva way to start your career as a Senator.”

Lefty is played by Bill Pullman, who’s long proven equally adept at playing reluctant heroes and erratic anti-heroes. Johnson is played by Peter Fonda, doing a very credible John Wayne impersonation. Out on Johnson’s land, looking for a cattle rustler, the soon-to-go-to-Washington Johnson contemplates Lefty’s future with him. He knows that Lefty is neither a favorite with the ranch hands or with Mrs. Johnson (Kathy Baker). “I reckon you’re gonna stand tall or you ain’t,” Jefferson says. No sooner does he bequeath Lefty his rifle than … boom. Johnson falls, shot through the head by a killer that Lefty nicknames “Blondie.”

Yes, “The Ballad of Lefty Brown” is a nouveau Western besotted by older Westerns. Aside from that “The Good, The Bad, and The Ugly” reference, “The Ballad of Lefty Brown” nods to “Rio Bravo” with its lawman Tom (Tommy Flanagan), a drunk who’s explicitly referred to as a “spittoon diver.” The story’s tendrils reach through “The Searchers” and any Western in which the railroad is coming to town.

Which is fine. Less fine is the often staggeringly relentless train of clichés in the dialogue, as when Lefty comes back to the ranch, Johnson’s corpse folded over the back of a horse. Furious, Baker’s now-widow says “You were supposed to watch his back.” “I’m sorry about it,” Lefty responds. “Sorry don’t get it done,” Mrs. Johnson responds. Thankfully the chat is suspended and Lefty goes renegade to track the killer. In the wild he meets a young, wet-behind-the-ears gunman who’s more like a gunboy. Jeremiah, nicely played by Diego Josef, is a pretty wholesome and likable example of this character sort, and he gives Lefty a chance not just to mentor but to hone his own initially questionable skills. The duo, aided by Tom, track down the killer in relatively short order, which should tip off viewers that the killing was not quite so simple as it seemed.

And indeed, it’s a plot, rooted in all kinds of corruption and nastiness. It takes a rather long time to get to the end of the line, not because it’s all that complicated, but because writer/director Jared Moshe doesn’t quite split the difference between a relaxed pace and a fatty screenplay. That said, Pullman is always great to watch, the Montana landscapes are gorgeously captured by cinematographer David McFarland, and there are a couple of action set pieces that spark. One of them involves three men in long johns fighting; one is in handcuffs. A pretty novel approach. As new-fangled Westerns go, this is less brutal than 2015’s “Forsaken,” and perhaps better for it. 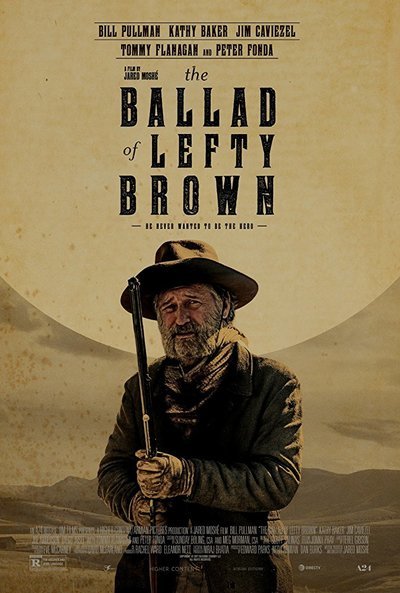