If you're reading this review of the Steven Seagal vehicle "The Asian Connection," it is probably too late to dissuade you from seeing almost any other movie. I get it: you want to see a movie with a vaguely racist-sounding title starring the has-been star of cheesy action films like "Hard to Kill," "Marked for Death," and "Above the Law." These films are bad, but in an endearingly disastrous way. The same is basically true of "The Asian Connection," a lousy bank heist flick and one of Seagal's most engagingly tacky recent efforts. I want to defend this movie, but it's so bad that I must warn you: if you watch this film knowing that it is Steven-Seagal-wearing-a-du-rag-and-glowering-impassively-at-attractive-young-women bad, you will get what you pay for. That's both an endorsement and a warning.

Speaking of warnings: Seagal is not the star of "The Asian Connection." Instead, he tries in vain to show off his range and grace as an older action star by playing a villain. But as with "Absolution," another recent Seagal flick that ostensibly paves the way for a younger star, "The Asian Connection" does not highlight a performance worthy of being put on a pedestal. I say "performance" and not "performer" because I don't know anything about leading man John Edward Lee—except that he's not very good at acting. Lee plays Jack, a bank-robbing American laying low in Cambodia who inadvertently robs a mob boss Sirankiri (Seagal) when he knocks over an unassuming bank and flees to Thailand. Jack is almost instantly caught by Niran (Sahajak Boonthanakit), Sirankiri's second-in-command, who in turn gives Jack an ultimatum: rob banks for him, or face Sirankiri's wrath.

Jack is, to put it mildly, boring. He's so generic that sketch-thin supporting characters like hothead partner Sam (Byron Gibson) and pseudo-empowered love interest Avalon (Pim Pubear) make Jack look less interesting. Seriously, all Jack does is rob banks, flirt with Avalon, glower at Sam, and pout angrily at Niran. This is a guy that says stuff like "Guess all those video games finally paid off" after a successful heist. Sam may be the token loser best friend, and he may say things like "I'm all about the money, baby!" And Avalon's naiveté may speak volumes about her creators' sexist assumptions about women, particularly her obsession with fairy tale logic ("Everything was getting too real. The fairy tale started to crack apart"). But at least they're not Jack, a guy whose most distinguishing characteristic is his friendship with weapons dealer Greedy Greg (Michael Jai White?!). Jack calls his mercernary friend "Greedy" over and over, and yet somehow does not die due to severe beatings. Jack leads a charmed life, but that does not make him interesting.

I mean, look: the makers of "The Asian Connection" made a lot of mistakes. Most of the actors' line-readings are so flat, so poorly recorded, and so fast that you have to wonder if the director was trying to break a record for how fast he could wrap principal photography. And the action scenes are so poorly shot that it's impossible to tell who's shooting who and where, like the times where Seagal sticks a gun out of a truck window and fires wildly ... somewhere ahead of him. And Lee ... well, there's no nice way to say this, but he runs funny. His arms pinwheel like he's signalling for a turn that his body simply isn't prepared for.

You spend this much time stuck with Jack, and you may ask yourself: where did Steven Seagal go? Sirankiri is not exactly Kurtz waiting up-river for Jack to come to the dark side. But he's mysterious enough to make you want to spend more time with him. For example: Seagal gracelessly drops several "f" bombs, particularly "motherfucker," with the grace of a hippopotamus ballerina. And he's constantly surrounded by young Asian women, but he never shows any sign of pleasure or approval. In fact, Seagal's idea of an expression-less stone-face is more like a constipated glare; maybe he hates women, who can tell? And what the heck is Seagal talking about when he says that fish are the "most important sentient being?" And when he angrily flips over a table with food, why does it look like the table is inflated with helium? Who is this guy, and why can't "The Asian Connection" be about him? There are no good answers to that burning question, but one thing is certain: "The Asian Connection" is the best kind of bad movie, the kind that makes you wonder about its glaring inadequacies, like a puzzle that must be solved. Don't say I didn't warn you. 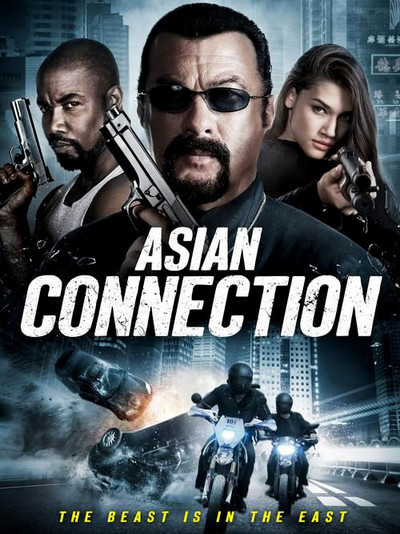 Rated R for violence, language throughout and brief sexuality/nudity.