The Artist and the Model

"The Artist and the Model" is a simple, straightforward film about the wonder and awe that the natural world inspires in us. It elicits such wonder and awe in the viewer mainly by holding its steady gaze upon beautiful or beautifully arrayed things under sunlight. "You can't create this light," the artist of the title says at one point while peering around his canvas at his nude model, who stands in a field where a combination of drifting pollen, shifting clouds, swaying branches and fluttering leaves gives the light a restless, flickering quality. He tries to reproduce it with dappled, mottled, uneven applications of paint.

The same restless light falls on the canvas and on the painter's majestically aged face. Beauty everywhere. This film's all-over gorgeousness, extended even, at one point, to a Nazi officer decked out in full Reich regalia, is a rare pleasure these days. Director Fernando Trueba and his screenwriter, the legendary Jean-Claude Carrière ("That Obscure Object of Desire") almost make an essay of it: Their point is that there's nothing superficial about the surfaces of things, particularly in the case of human beings, whose eyes, faces and body language betray their histories and inner lives; it's a matter of being willing and able to see what's really there. Trueba, using black and white widescreen cinematography by Daniel Vilar, is going for elemental truths and universal pleasures.

After his wife Lea (Claudia Cardinale) discovers an incandescent Spanish beauty bathing in a fountain, reclusive French painter-sculptor Marc Cros (Jean Rochefort) offers the young waif, Mercè (Aida Folch) a job modeling for his latest sculpture. It's 1943 in occupied France, and Cros hasn't worked in his country studio since the beginning of the war. The girl turns out to be an escapee from a prison camp who helps resistance fighters sneak across the border to Spain. The film handles these plot points with graceful efficiency, but they are as marginally interesting to Trueba as they are to Cros, whose philosophy on war can be summed up by something Francois Truffaut once wrote in response to criticisms that he had abandoned political reality in his work: "In troubled periods the artist hesitates. He is tempted to abandon his art and to make his art subservient to an idea. Through film he becomes a propagandist. When this thought occurs to me, I think of Matisse. He lived through three wars untouched. He was too young for 1870, too old for the war of 1914, a patriarch in 1940. He died in 1954 between the wars in Indochina and Algeria having completed his life’s work, his fish, women, flowers, landscapes framed by windows. The wars were trivial events in his life. The thousands of canvases were the serious events."

In fact, Cros does claim to pursue an "idea" but not in the cheap sense that Truffaut meant. Like Matisse, who is mentioned as a friend of the fictional Cros, our protagonist is subservient to nothing but the pursuit of an essential idea that illuminates all of life. His focus is even narrower than Matisse's: making women the subject of every work. The political persecution happening a few miles from his cabin doorstep are merely the background noise of "savages." He says that only two things confirm the existence of God, and his paintings and sculptures of women in repose amount to a testament to the "first thing."

"The Artist and the Model" is the kind of arthouse film that old-fashioned American grindhouse distributors who dabbled in Euro cinema would have loved: the female protagonist spends roughly 70% of her screen time naked. The camera explores every curve with reverence. An obligatory gang of neighborhood kids climb up the sloping forest hills to get a peep at the nude model and later get smacked around by an officious priest straight out of Fellini and Bunuel. Various scenes end with tidy one-liners and winsome smiles. These conventions give the film a shape as lazily pleasing as Folch's, but a sublime scene midway invites us to give ostensibly stock situations a longer, deeper look. Cros analyzes a simple Rembrandt sketch which he calls the greatest picture ever made. Cros's description of the work is one of the most eloquent and passionate visual essays on art, imagination and compassion that I have ever encountered. It can also plays as an admonishment to the modern Twitterized world, in which even major artists have become resigned to the dominance of a splintered, glancing, dehumanizing gaze.

From there the film just gets lovelier and lovelier, distilling its ideas through the simplest of moving images. Cros struggles terribly, crossed-out sketch after crossed-out sketch, discarded clay model after discarded clay model, to find his grand statement. He visits his neighbor, a sculptor of marble who mostly makes tombstones, to check on the progress of his own tombstone. Time is running out. Mercè's involvement with a wounded Spanish resistance fighter pales beside the suspense of Cros's basically spiritual quest. With Mercè more receptive to his strange methods, he tries to explain himself further by re-telling the story of Adam and Eve in what sounds like an even more male chauvinist light than the Old Testament version. In his re-imagining, God crafted Eve as his perfect companion and Adam was merely their offspring. The way Rochefort tells it, though, we see what Trueba and Carriere are getting at, that women are the essential creation, men merely utilitarian accessories.

This agog philosophy is best summed up when Cros tells Mercè how beautiful his wife's body was when she was Mercè's age: "She had the prettiest body I have ever seen. She'd take her clothes off and it was all there!" Since the wife is played by Claudia Cardinale, whose all-thereness is recorded in film history and whose radiant smile and sparkling, mischievous eyes still awe at 75, we believe him. 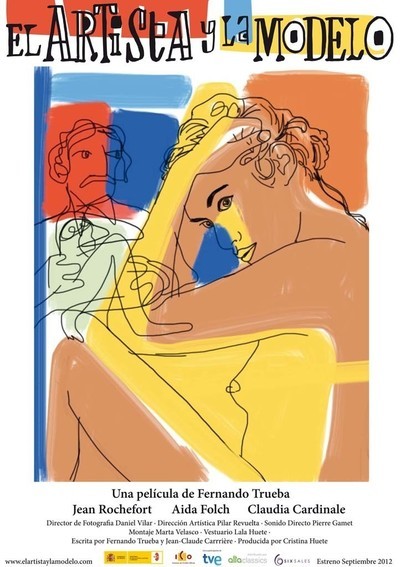