If “Casablanca” famously told the story of a love triangle set against the backdrop of World War II, in which the star-crossed lovers realized that they needed to separate for the greater good because “the problems of three little people don’t amount to a hill of beans in this crazy world,” then “The Aftermath” presents a version of that basic story that is chock-full of beans and a few other things to boot. Although it is theoretically based on a novel by Rhidian Brook, it feels more like a compilation of bits and pieces taken wholesale from other and, in most cases, better films. The result is a listlessly soapy melodrama, save for a little bit of modern-day nudity and bloodshed, could have been churned out 60-70 years ago and then gone largely forgotten in the ensuing decades.

The film is set in Hamburg about five months after the Allied victory, as shell-shocked locals stumble through the piles of rubble that used to be their city and Allied troops try to maintain some semblance of order while searching for any remaining Nazi loyalists. One of the men charged with this mission is Lewis Morgan (Jason Clarke), a recently arrived British captain who, unlike most of his fellow soldiers, tries to treat the locals with some modicum of respect and dignity. So much so, in fact, that when he and his wife, Rachel (Keira Knightley), are sent to live in the lavish mansion that has been “requisitioned” from recent widower Stefan (Alexander Skarsgard) and his teenaged daughter Freda (Flora Thiemann), he magnanimously offers to let them continue to live there (in the attic, naturally) instead of forcing them off to stay in a refugee camp. Rachel, who is still struggling to process her son's death in a bombing raid a couple of years earlier, is not especially thrilled with the arrangement and while Lewis and Stefan try to make the best of the awkward circumstances, she treats Stefan with barely disguised disdain.

As time goes by, no pun intended, and Lewis is constantly called away to work, Rachel’s attitude towards Stefan begins to thaw. Finally, on a night when Lewis is once again gone and Rachel finds herself tending to wounds that Stefan acquired when caught up in an out-of-control street protest, grand passions finally arise and the two find themselves on a table indulging in what the beloved namesake of this website, had he reviewed this film, would have almost certainly referred to as “rumpy-pumpy.” Before long, Rachel is almost a new woman—she smiles, she returns to playing the piano after having given it up for years and seems to have forgotten all of her initial and not-entirely-unfounded suspicions about whether or not Stefan was a full-fledged Nazi. (In a stroke of good fortune, the screenplay also conveniently forgets about this particular plot detail almost as soon as it raises it.) Before long, Rachel is considering running off with Stefan and Freda to a new life but has to figure out how to deal with the morally righteous but somewhat lunkheaded and self-absorbed Lewis, the kind of guy who introduces Rachel to people by saying “This is my wife, Mrs. Morgan.” To complicate things further, Freda has been running around secretly with Albert (Jannik Schumann), a young Nazi wannabe who wants to use her connections to do some violence against his city’s intruders.

The notion of telling a story centered on relationships in the immediate wake of World War II—with the inescapable tensions between the Germans struggling to make a new life under the watchful eye of the same people who destroyed their city—could have plausibly been developed into an insightful drama. It quickly becomes evident that this approach must have been too difficult for Brook, who co-wrote the screenplay with Joe Shrapnel and Anna Waterhouse, and director James Kent (whose “Testament of Youth” [2014] was an infinitely more interesting wartime romantic drama) to pull off, and instead they elected to go the full-on soap opera route. In other words, we are treated to any number of scenes of people staring longingly out of windows, characters whose previously established behavior changes abruptly the moment that the plot requires it to and too many moments involving a piano given far more symbolic weight that it can possibly bear. (The piano in “The Piano” didn’t have to bear the symbolic burden of the Steinway on display here.) Once it becomes painfully obvious that there's not going to be anything here that you haven’t seen before—especially if you have seen “Atonement”—most viewers will check out long before the story reaches its messy and rushed conclusion.

Of course, with Keira Knightley in the cast, comparisons to “Atonement” are pretty hard to avoid. She is never bad here, per se, but compare her brilliant and sadly under-seen turn in the recent “Colette” with her work here and you will witness the difference between an actress delivering a fully focused and committed performance and one who is pretty much just going through the motions. Skarsgard is also an excellent actor under normal circumstances but the role of Stefan offers him nothing to sink his teeth into—instead of being asked to illustrate the complicated and haunted aspects that his character should have in order to make him interesting, he appears to have been hired primarily for being able to look good while chopping wood. As for Clarke, he naturally has to play a less appealing character in order to make the relationship between Rachel and Stefan work, but he comes across as such a blinkered stiff right from the start that it's impossible to discern what she could have possibly seen in him in the first place.

“The Aftermath” is a handsomely mounted work and those who don’t have a problem with watching second-rate melodramatics might find it to be a vaguely tolerable way of killing a couple of hours. Personally, I wanted more—I have a hunch that other viewers will feel the same. 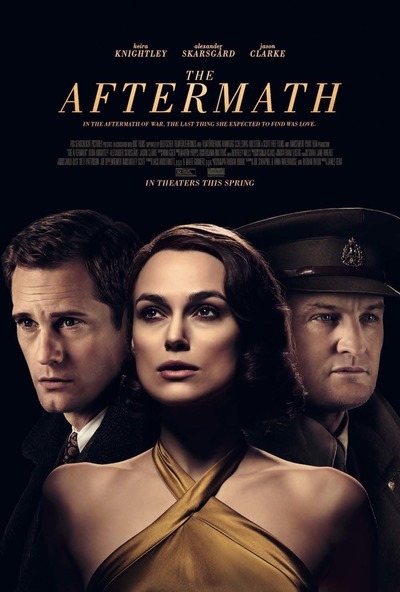 Rated R for sexual content/nudity, and violence including some disturbing images.