Is Hong Kong action-adventure "The Adventurers" that bad, or is leading man Andy Lau just not as charming as he used to be? In America, Lau is probably most well-known as the star of "Infernal Affairs," the milestone Hong Kong undercover cop thriller that was later remade as "The Departed." But in Asia, Lau has enjoyed more than three decades in the spotlight, and rightfully so. This guy is so slick that he somehow maintained his suavitude even after he, after performing a hit love ballad called "Toilet Bowl" during his time as a Mando-pop musician, served as spokesperson for the Ho Cheng Group toilet company. Just imagine: Lau's face was on stickers plastered in or around urinals in Taiwan, China, and Hong Kong—and he still looked smooth! Unfortunately, Lau just isn't charming enough to carry the utterly forgettable "The Adventurers," a tepid remake of John Woo's already lame heist flick "Once a Thief."

"The Adventurers," a sleepy globe-trotting adventure about a retired thief (Lau, of course) drawn in by the promise of "one last heist," is an underwhelming vanity project (Lau also produced the film). Now 56 years old, Lau reprises a role that Yun-Fat Chow originated back in 1991, when Chow was only 36 years old. The role of Zhang, the cocky, and quietly self-assured ex-con jewelry thief, might seem ideal for Lau. But if "The Adventurers" is any indication, Lau has not aged gracefully.

Lau always strains to appear cool in scenes that require an air of effortless yet contained gracefulness from him. This is partly a language barrier problem: Lau exchanges choppy English with co-star Jean Reno, who plays the obligatory stubborn French detective that's hot on Zhang's heels, but always just one step behind. But Lau's also stuck with a wan script, which does not give him many opportunities to charm viewers with his signature smile, or boyish, aw-shucks shoe-gazing. Lau's a star, and you can see it any time that Zhang strides confidently into a room packed with tuxedo and ballroom-gown-clad gamblers and socialites.

But "The Adventurers" is otherwise far too skimpy to be memorable. All we know about Zhang is that he likes money. In fact, he playfully explains his motives for participating in the theft of the priceless three-piece "Gaia" necklace by cutting right to the heart of the matter: "I'm greedy, and I like money." This could have been more than just a throwaway line, but it's not since characters are never treated as anything more than archetype-flat character types. Everything you see in "The Adventurers" is essentially a leftover from earlier heist/chase films, right down to the lame John Barry-esque James Bond Lite score, and the uninspired "Thomas Crown Affair"-like set pieces. So it's no wonder that Zhang and colleagues Po Chen (Tony Yo-ning Yang), Red (Shu Qi), and Kong ("Infernal Affairs" co-star Eric Tsang) are never developed beyond their formulaic roles. Po is the young hacker, gutsy, and untrained. Red is the plucky femme fatale, cocky, and mysterious. And Kong is the dad-like fixer, the silent partner that sets everything up, and then promptly disappears. Meanwhile, Jean Reno, as Pierre, huffs and puffs as he trails after Zhang. Poor Reno is the saddest case: he's saddled with dismal, uninspired lines like "What are you up to this time" and "You're already too late!" I'd say that this kind of paint-by-numbers scenario should write itself, but you try telling that to director Stephen Fung ("House of Fury," "Tai Chi Hero") and his five credited co-writers.

The fact that Lau, Reno, Qi, and their co-stars are stuck with such a poorly sketched-out narrative wouldn't matter if "The Adventurers" had even a couple of worthwhile set pieces, or some dazzling action choreography. Unfortunately, Fung displays none of the bratty knack for hyper-stylized action scenes that he did in his recent "Tai Chi Zero" and "Tai Chi Hero" films. Many scenes are over-edited, and generally lack rhythm. You should be on the edge of your seat when Lau walks into a room, pours on the charm, and tricks a room full of already-on-edge auction attendants into leaving in a panic. In fact, watching Lau work should be the main draw of the film since he is normally rather charming, and up for anything, including commanding roles that required him to be heavily made-up with a cumbersome full-body fat suit ("Love on a Diet"), and a many-abbed muscle suit ("Running On Karma"). But there isn't even any noteworthy action choreography in the scene here where Lau dangles from a vaulted ceiling, and attempts to defy logic and gravity by lowering himself over a display case guarded by a mess of criss-crossed red lasers. This scene is lifted directly from Woo's original film, and has since been done better by Brian De Palma in "Mission: Impossible." Why do we need to see it one more time, only now with less feeling?

"The Adventurers" leaves viewers wondering whatever happened to Lau, even as they watch him try to desperately recapture the spark of irrepressible charm that typified his indomitable rise to fame. Lau should take a page from Tom Cruise and Jackie Chan's "middle-aged prima Donna action star" playbook, and learn what will best flatter himself, be it running real fast, or performing elaborate stuntwork. He may be impossibly fit for any age, but Lau's not strong enough to claw his way out of this toilet. 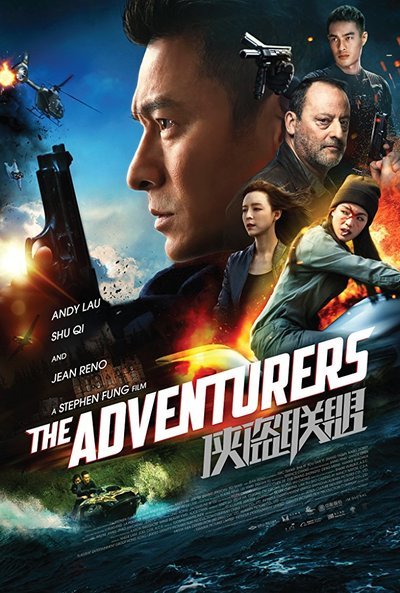 You Tianyi as Tingting