Tell Me Who I Am

Would you give someone you love the “Eternal Sunshine of the Spotless Mind” cure if you could? Meaning, would you erase painful recollections on their behalf, just to take their lifelong ache away? It’s a good question to ponder while settling into Academy Award-nominated filmmaker Ed Perkins’ “Tell Me Who I Am,” which contemplates the function of memory, raising ethical questions around familial honesty and responsibility through the true, yet stranger-than-fiction story of real-life identical twins Alex and Marcus Lewis. While it’s hard to do complete justice to their heartbreaking tale involving a dark, traumatic childhood, Perkins deserves all the credit for treating it with the respect and care that it deserves.

The results are a tad standard from a filmmaking standpoint. In the disciplined fashion of Bart Layton's “The Imposter,” Perkins weaves together reenactments and first-person accounts with little creative risk, seldom reaching the narrative jolts and scale of the superb “Three Identical Strangers,” Tim Wardle’s shocking documentary about identical triplets. But this is a different, more intimate kind of movie, with a cumulative emotional impact that is nothing short of devastating. Know that there will be major spoilers ahead; one can’t write about “Tell Me Who I Am” without getting into the details of what the Lewis siblings, well into their 50s now, have endured both as kids and adults grappling with survival wounds. The brothers were born and raised in a town right outside of London and were shaken to their core when the 18-year-old Alex had a near-fatal motorcycle accident in 1982, waking up from his prolonged coma to remember nothing and no one but his brother Marcus.

It was a new start for Alex, with the unplanned parental duties of re-teaching him everything falling onto his other half. For the next decade and change, Marcus would take Alex under his wing, educating the adult newborn on things he forgot, from the most basic to the most complex. But more importantly, he would reconstruct his brother’s sense of identity by reminding him about their mutual history brick by brick—a happy, ordinary childhood full of rosy days, family vacations and such, always with their mother Jill by their side. Marcus built it all from the ground up like a carefully curated instagram feed for his brother. Except, it was all a lie, told with humanly intuitions guided by love, through instincts both protective and therapeutic. The truth came much later when the hard-partying, hardcore hoarder Jill died of cancer in 1995, leaving her sons with a massive home filled with layers and layers of revelations, much different than the dust-pink social media-esque scroll Alex was made to browse and accept.

Revealing these appalling facts like the pieces of a puzzle in a thriller, Perkins recreates segments of the two men’s childhood home and gives us distressing glimpses of objects, the most upsetting of them (at least for a short while) being Christmas and birthday presents the brothers never got to open in their youth. But then a more troubling, even sickening, item appears—a photo of Alex and Marcus as fully naked young kids, with their heads cut off. This particular discovery leads the already suspicious Alex to ask the inevitable tough question. He learns (as we do), that Jill had abused them sexually for years, and also enabled others in her circle to routinely rape her sons. Spelled out by the film in disturbing yet necessary detail, the grim reality sends the then thirty-something Alex off to yet another journey of self-rediscovery. But this time, with the lack of a clean slate, the work required from him would be much harder. How would one cope with something so hurtful, and move forward in life knowing that his most trusted ally has been lying to him all these years?

Having jointly published a memoir back in 2012, the twins have already been on a long, undoubtedly arduous journey of understanding and forgiveness to find some semblance of closure. So when they sit face to face in “Tell Me Who I Am,” and decide there wouldn’t be any more lies between them, there is a detectable layer of artificiality in their manners—it’s not really a resolution we’re witnessing in real-time. Still, their tangible shared pain quickly turns an awkward performativeness into a most genuine therapy session, one that is both disarming and uplifting to observe. Unsurprisingly, you root for Alex, feeling his hurt and loneliness. And along the way, you hold Marcus just as dear, realizing the alternate reality he created for his brother was both an act of love and a tactic of survival. Perkins’ greatest feat as a filmmaker is gently guiding the viewer to that mutual place of understanding. 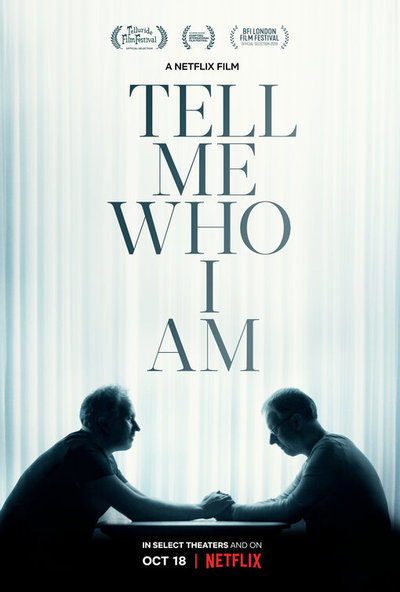