When a comedy is made about a real-life topic that is no laughing matter, it had better be funnier than Sameh Zoabi’s “Tel Aviv on Fire.” The premise is a richly flavorful one, but the execution is as bland as unseasoned hummus. We’re not charmed or amused by the blundering choices made by our central protagonist, we’re simply irritated by them. For a film sending up the contrivances of soap operas, it sure is susceptible to remaining within the comfort zone of clichés itself, rendering its portrayal of the unscripted world practically indiscernible from the artificial one, save for a slight vaseline-like sheen on the lens. Everything builds up to a conclusion so underwhelming and anticlimactic, it left me feeling as if I had been strung along through a reasonably diverting serial only to be abandoned in the season finale of “Game of Thrones,” wishing desperately for a rewrite.

Kais Nashif is an effortlessly natural actor, but he’s all wrong for the role of Salam, a neurotic Palestinian would-be writer tasked with tweaking the Hebrew dialect on a hokey soap (sharing the film’s title), that has proven popular on both sides of the Israeli West Bank wall. Salam got the gig likely because his uncle, Bassam (Nadim Sawalha), is the show’s producer, who eagerly awaits the top-secret finale, which he has lifted from “The Maltese Falcon.” The soap’s love triangle between a spy, Tala (Lubna Azabal), her Palestinian lover, Marwan (Ashraf Farah), and the Israeli general, Yehuda (Yousef Sweid), she aims to seduce, also appears to have been borrowed from another Hollywood classic, Hitchcock’s “Notorious,” down to the use of a key as the MacGuffin. Nashif’s affect is so flat and bereft of playfulness that his thickheaded moves verge on insufferable, such as when he asks a female border patrol officer whether the word “explosive” is insulting when used to describe women.

To his inexplicable shock, he’s ushered before the checkpoint’s Israeli captain, Assi (Yaniv Biton), who changes his tone once he discovers that the dope works for his wife’s favorite series. Salam then digs a deeper hole for himself by claiming that he writes the show, a fib that gradually becomes fact when he starts incorporating Assi’s story notes into script revisions, lending more alleged believability to the role of Yehuda. Assi also yearns to make Yehuda a manlier love interest for Tala, which would make her—and viewers like the captain’s wife—fall for him, while combating against the program’s anti-Semitic characterizations. Why Salam feigns his writer status is a mystery, since he’s so creatively bankrupt he can’t dream up dialogue without transcribing overheard conversations or baiting Assi with “Arab hummus” in order to continue their secret collaboration. There are blatant echoes here of Woody Allen’s hilarious “Bullets Over Broadway,” with Assi serving as the Chazz Palminteri to Salam’s witless Cusack, yet he’s too much of a bully to be truly endearing.

As the show develops added dimensions of realism under Assi’s guidance, Salam’s scenes offset devolve into a soap opera, as he relentlessly pursues an old flame, Miriam (Maisa And Elhadi), despite the fact that they are inherently incompatible. Her desire to remain in her home country clashes with Salam’s primal need to move elsewhere, far from the occupation that has traumatized him since his childhood. I never bought the sentimental progression of their subplot for an instant, especially when the only obstacles separating them arrive in the form of tired tropes like an over-the-phone misunderstanding. There is some clever production design behind the scenes, such as an overturned Eiffel Tower that serves as a backdrop to Salam’s argument with Miriam, when his plans for moving to France are inadvertently revealed. Yet it’s only as Salam’s inner creativity becomes awakened, prompting him to intuitively link various props with ideas of his own creation, does the plot threaten to catch fire.

Alas, the script co-authored by Zoabi and Dan Kleinman concludes with a moral that I simply couldn’t accept. What makes it all the more disheartening is that there’s considerable potential in the set-up. Assi is intent on strong-arming Salam into writing a finale for the show where Tala marries Yehuda, though Bassam argues that such an idealized ending would be tantamount to the Oslo Accords—a big illusion that changes nothing. With both Palestinian and Israeli viewers invested in the show’s outcome, Salam could take the opportunity to bridge divisions without undermining the seriousness of the ongoing struggle that he depicts. As Assi’s wife affirms, the soap’s appeal has transcended politics and could potentially serve as some sort of unifying beacon, enabling viewers to empathize with those existing on the other side of the wall.

Instead, the film ends with a maddening shrug, claiming that any glimmer of hope would be branded as false by viewers, since it doesn’t reflect the mess that they have been entrenched in since 1948. This calls into question what the point of storytelling is if it’s merely about replicating our reality rather than aiming for something higher. Salam ultimately settles for a compromise bound to please very few aside from Assi, who sheds all trace of personal convictions as long as it gets him on TV. His wise observation that love is shared between those who listen to one another appears to have evaporated from his memory when Salam later recites the words back to him, mirroring the show’s own botched continuity involving dropped cancer diagnoses. The film’s apolitical stance results in it making no statement, apart from concluding that lucrative narratives on screens both large and small have now become as unending as the Israeli-Palestinian conflict, and I cannot imagine a more depressing fate than that. 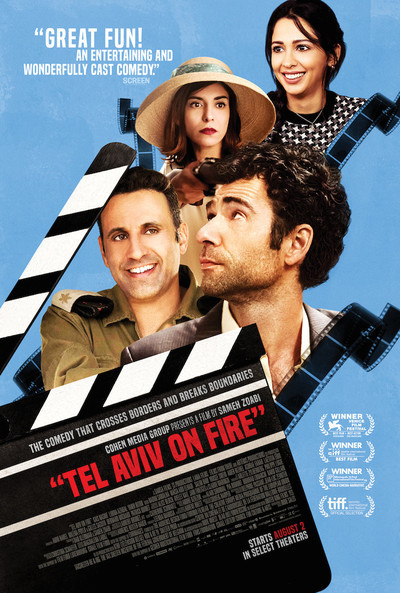