If nothing else, "Teenage Mutant Ninja Turtles" reminds us that nostalgia is often used as a mandate for spectacularly lazy filmmaking. Yes, I too loved the action figures, video games, cartoons, and previous live-action commercials, I mean movies. But a "Teenage Mutant Ninja Turtles" film that's trying this hard to pander to my childhood love of pizza, karate, and talking animals shouldn't be this imaginatively challenged. We're talking about a film where exposition is dumped over viewers' heads in every other scene, action scenes are loud and uncoordinated, and every joke feels like it was scripted hastily in the vain hope that punch-up writers would later rewrite them. Instead of a fun and unchallenging limp down memory lane, "Teenage Mutant Ninja Turtles" is an energy-sapping exercise in futility that will leave you begging for less.

In "Teenage Mutant Ninja Turtles," an inquisitive reporter discovers that you can make an inherently absurd premise even more hard-to-swallow with a convoluted backstory. Channel Six news anchor April O'Neil (Megan Fox) wants to be taken seriously as a journalist, so she investigates a city-wide crime wave involving gun-toting bad guys called the Foot Clan. She becomes even more determined to follow this story after witnessing a mysterious vigilante stop a Foot robbery by chucking an industrial-sized shipping container at the bad guys. She then discovers that this crime-stopping hulk isn't working alone, and that both she and her own late father have ties to this shadowy superhero that go as far back as 1999. So April spends the first half of "Teenage Mutant Ninja Turtles" establishing how she's related to the Ninja Turtles—disciplined Leonardo (voiced by Johnny Knoxville), hot-head Raphael (Alan Ritchson), goof-off Michelangelo (Noel Fisher), and geek Donatello (Jeremy Howard)—and soft-spoken (but totally unsuspicious!) philanthropist Eric Sacks (William Fichtner). Fifty minutes later, conflict ensues.

The fact that April's search for answers comprises half of the film's plot suggests that the film's creative committee got so wrapped up in using her to relate their origin story's plot that they forgot what viewers came to see. This is where the film's shock-and-awe maximalism (ie: everything bigger for no good reason) starts to make a soul-crushing kind of sense. You don't need to do much to impress viewers if you can immediately overwhelm them. So these Turtles are bullet-proof, six-foot tall mountains of biceps and quads. Likewise, Foot leader Shredder (Tohoru Masamune) looks like a samurai-themed death metal band-leader with an Edward Scissorhands fetish. And Turtles leader Splinter (voiced by Tony Shalhoub) looks like a cross between old man Groucho Marx and a freakshow pinhead...with a three-pronged Fu Manchu mustache. Thanks to the film's ill-advised use of post-converted 3D projection, you can get an up-close look at their freakish appearances.

Likewise, the film's action scenes are all so frenzied so that director Jonathan Liebesman ("Battle LA," "Wrath of the Titans") didn't waste time on choreography, humor, or anything more than frantic motion. This is OK for an introductory fight scene, when April can't clearly make out the Turtles beating up the Foot clan on a dark subway platform, but it doesn't fly during a down-hill car chase that involves a Humvee, rocket skateboard and electric grappling hook things. Characters are routinely shot out of focus and barely even covered competently, unceremoniously drifting in and out of the camera's frame.

The same is true of the film's winking jokes, joyless attempts to acknowledge and muscle past the film's inherent ludicrousness. This isn't a new tactic, but in previous cartoons, Michelangelo, the group's comic relief, was at least funny. Here, Mikey's best scene is the one where he leads the group in beatboxing before a climactic (ie: overstuffed, and noisy) battle. But Fisher's just not naturally charismatic, and the material he's given to work with is a joke without a punchline: look, hip-hop turtles, so much more wacky than martial artist turtles! This is a gag for people who don't have the attention span for gags just as "Teenage Mutant Ninja Turtles" is nostalgia-bait for people that only need an excuse to regress. You already know whether or not you're going to like this film, and that's kind of the problem. 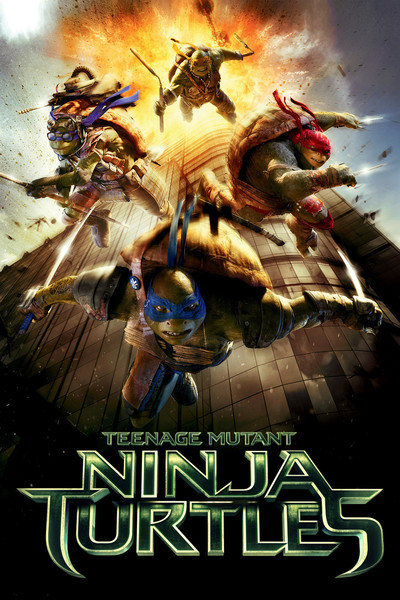 Will Arnett as Vernon Fenwick

William Fichtner as The Shredder