“Ted,” the dirty-talking-teddy-bear hit of 2012, was packed with a sufficient number of outrageous belly laughs that it was easy to let pass the fact that there wasn’t much of a movie underneath those laughs. Or, as I put it when I reviewed the first picture for another website, with such enthusiasm that I actually gave it three-and-a-half stars (I’d adjust that to an even three if I could turn back time), “it really is not quite so different than that of a standard romantic comedy in which a stand-up but somewhat immature guy has to fight off his lesser angels, largely embodied in a slackerish best-friend character, so as to become The Man (and Husband) he was Meant To Be.” “Man” being Mark Wahlberg’s John; “slackerish best friend” being the dirty-talking teddy bear, Ted, and eventual bride of man being Mila Kunis, who as it turned out showed plenty of good sense in not coming back for the sequel.

With John now divorced and porn-addicted, it’s up to exceptionally vulgar Ted to take up the storyline slack. “Ted 2” begins with the bear, who could use a wash beyond soaping up his mouth, marrying former-good-time hottie Tami-Lynn (Jessica Barth) at a wedding officiated by Sam Jones of “Flash Gordon” fame. (There’s a lot of recycling from the first film here.) Soon their domestic bliss goes south, and the couple enact a quasi-parody of the “Raging Bull” “you bother me about a steak” scene, which is rather queasily unfunny because the De Niro part is being played by a stuffed teddy bear rather than in spite of it.

Co-writer and director Seth MacFarlane, the anything-goes creator of several animated television series, followed “Ted” with an Oscar-hosting gig that was distinguished by a callous smarminess, and then offered cinema a wildly unfocused and grandiose Western parody (“A Million Ways To Die In The West”). In this film, centered around a really lazily conceived “civil rights” case to grant Ted his “personhood,” MacFarlane, who also voices Ted in a particularly lumpen variant of Boston Nasal, gets really aggressive with his “I dare you to be offended” brand of humor. Particularly in the racial department. In one courtroom scene, a lawyer (there are three prominent ones in this movie, one played by John Slattery, one by Morgan Freeman, and the third played by Amanda Seyfried; take a wild guess which one gets to be Wahlberg’s love interest) actually invokes Dred Scott, and draws a connection between that notorious case and Ted’s petition. In another, a whipping scene, the TV miniseries “Roots” is played for pop-culture kitsch laughter. It’s not clear how funny these, and other such “racially themed” jokes would play in a country that wasn’t coming to terms with a racist massacre, but I myself kind of doubt that a lack of horror in the headlines would boost the yuck value of such japeries.

Aside from race jokes, “Ted 2” offers a nearly staggering number of weed jokes, a couple of which are mildly funny, or at least funnier than the rape jokes. Then there are the gay panic jokes, the racial gay panic jokes, the celebrity cameo jokes, and long stretches of no jokes, oddly enough, stretches in which the creepy kidnapping subplot of the first film is recycled, and works much less well than it did in the first film, where it didn’t quite work but, you know, the jokes were funnier. And so it goes.

While the first film offered, by my casual recollection, almost two dozen belly laughs, this one barely registers four. The mean spiritedness oozes beyond the racial stuff and reaches fuller flower at the movie’s climax, which is set at a comic geek convention, and yes, consider the possibilities. All aspiration to actual humor is set aside in favor of a hammering insistence on the sub-human qualities of fanboys, cosplayers and so on. It starts to get numbing after a while. Acridness combined with ineffective humor is a bad mix, and whatever goodwill the movie scored based on sentimental value or the few effective jokes in the front end is entirely spent by the end credits. I suspect it’s going to be quite a while before we see a “Ted 3.” 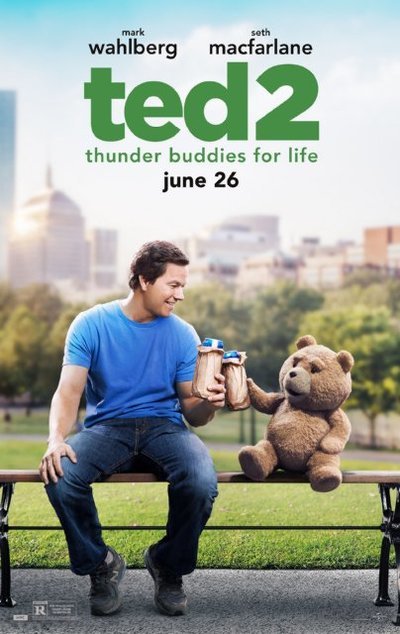 Rated R crude and sexual content, pervasive language, and some drug use