“Tarzan, The Ape Man” is “The Blue Lagoon” with elephants. Of course it's completely ridiculous, but at the same time it has a certain disarming charm. Sure, it's easy to groan at the secondhand "plot." It's easy to laugh at the clichés and mourn the demotion of Tarzan, who started out in the movies as king of the jungle and now gets fourth billing behind a schoolgirl, an anthropologist, and a wimp. And yet when Tarzan beats his chest and screams and swings to the rescue on a vine, there is something primal happening on the screen. And when Jane and three loyal chimpanzees tenderly bathe the body of the unconscious ape-man, we're getting very close to the reasons why we watch movies, and why there will always be a few movies to reawaken the child within us.

This Bo Derek version of the "Tarzan" legend is allegedly a remake of the MGM version of 1932, starring Johnnie Weissmuller and Maureen O'Sullivan. Not in that version or in any of the others, however, did Hollywood honestly address the central mystery of the Tarzan story, which is--what, exactly, was the intimate relationship between Tarzan and Jane? Were they lovers? Friends? Neighbors? Business partners? I always presumed they made love in order to produce Boy, but no: reader Jennifer Wise informs me Tarzan found Boy in the wreckage of a plane in “Tarzan Finds A Son!” (1939). No wonder I always thought there was something just a little peculiar about the behavior of Weissmuller, Lex Barker, Gordon Scott, and other movie Tarzans. There they were, all alone in the jungle with the beautiful Jane, and what did they do? Swing around on vines and talk to the animals. If I'd wanted “Doctor Dolittle,” I would have seen “Doctor Dolittle.”

This 1981 version is nothing if not willing to satisfy our curiosity about sex life in the rain forest. Bo Derek (who stars and produced) and her husband John (who directed and photographed) are frankly interested only in the relationship between Tarzan and Jane. The whole movie is a setup for several steamy scenes of confrontation between the savage, muscular jungle man and the petite young girl with eyes as wide as her shoulders. When Tarzan and Jane first meet, the movie all but abandons its plot in favor of foreplay. This is not a movie to waste time on ivory-smuggling, Nazis, cities of gold, ant-men, slave girls, lost safaris, or any of the countless other plot devices Edgar Rice Burroughs used as substitutes for interpersonal relationships. It gets right down to business.

The movie opens with a vow by Bo Derek's scientist father (Richard Harris) to lead an expedition to plunder the jungle of its secrets. His real mission: To capture the legendary ape-man Tarzan and bring him back to his club--stuffed and mounted, if possible. Harris takes Bo along on his expedition, which also includes John Phillip Law in the role of the wimp assistant. Law has hardly anything to say, and is always the guy who's looking the other way when Tarzan kidnaps Jane. After a series of routine shots of the jungle march, Tarzan does meet Jane and finds himself powerfully attracted to her. Harris is of course insane with jealousy: "Do you know what he really wants?" he asks Jane. She hopes so.

Tarzan kidnaps Jane, and then the movie boringly intercuts the jealous father searching for the curious girl. Harris's role in this movie is as hapless as Jason Robards's role in “The Lone Ranger.” Nobody cares about him, his dialogue is overwrought and underwritten, and every time Tarzan and Jane are poised to jump into the bullrushes, the movie cuts back to Harris, slogging through the jungle and cursing the ape-man.

The story line was ridiculous to begin with, but it goes berserk by the time of the movie's incomprehensible climax in a village of mud worshippers. They capture Derek, smear her with paint, and prepare her for some sort of unspeakable sacrifice before Tarzan gallops to the rescue with a herd of elephants. Those friendly elephants are, of course, part of the Tarzan legend. Tarzan speaks Elephant, and there's always that great moment when he needs help, and the elephants hear his screams and perk up their ears. I've always thought it would be dangerous to ask Tarzan for help unless you really wanted it. Say you had a small problem like a missing gourd or a stolen spear, and Tarzan arrived at your village with a herd of elephants to fix things. You'd get your gourd back, maybe, but you'd be cleaning up for weeks.

But never mind. This movie's scenes between Bo Derek, as Jane, and Miles O'Keeffe, as a Tarzan who never speaks a word, show them as complete sexual innocents, fascinated by the wonderment of each other's bodies. Jane's expression as she looks at the unconscious Tarzan is entrancing. Her unabashed curiosity about him is sexier than any number of steamy sex scenes would have been. Although some of Bo Derek's nude scenes have reportedly been cut from the movie at the insistence of the spoilsport Edgar Rice Burroughs estate, the remaining nude footage is remarkably free of prurience. The Tarzan-Jane scenes strike a blow for noble savages, for innocent lust, for animal magnetism, and, indeed, for soft-core porn, which is ever so much sexier than the hard-core variety. If you do not agree with me, you will probably think Bo's banana scene is ridiculous. I prefer to think it was inevitable. 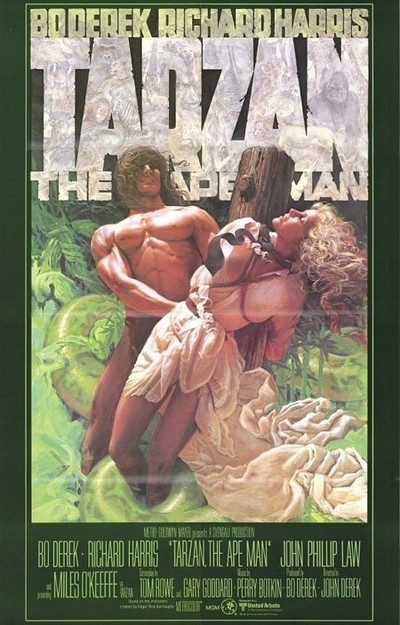