Film directors are prone to say that much of their work is done by the time they choose the perfect players to bring their characters to life. I doubt Woody Allen lost much sleep once Cate Blanchett agreed to step into the lead of “Blue Jasmine” or that Alejandro González Iñárritu wrung his hands much after Michael Keaton consented to do “Birdman.”

Screenwriters also benefit from expressive actors, especially those whose lived-in presence can suggest a particular outlook on life and years of experience in a shorthanded way that mere dialogue and exposition can’t hope to achieve. What could be heavy lifting for an audience suddenly becomes a transporting act of intuitive observation. The dynamite elderly duo in "Amour" is the perfect example.

That thought floated through my mind as I watched “Tangerines,” the first Estonian movie ever nominated for a foreign-language Oscar. It is a simply told—though never simplistic—war movie about the 1992 conflict between the former Soviet countries of Georgia and Abkhazia, and a nearby neutral Estonian community whose residents have mostly chosen to flee to their ancestral homeland out of safety concerns.

However, this story primarily concerns Ivo (Lembit Ulfsak), a getting-on-in-years carpenter who decides to stay behind to assist his worried friend, Margus (Elmo Nuganen), as he attempts to salvage whatever he can from a bountiful tangerine crop before the conflict reaches the doorsteps of their humble abodes.

Although events unfold amid a gorgeous pastoral setting with rolling green hills and leafy trees, there is a silent starkness about this countryside that suggests Ingmar Bergman’s use of natural surroundings. Then there is Ulfsak: Long and lean, with white hair and beard, and blessed with a visage that bespeaks of stoic nobility, a wry perspective on the world and innate compassion. This Estonian screen veteran cuts a striking figure of world-weariness that is akin to that of Bergman regular, Max von Sydow. Clearly, it will take much more than an encroaching civil war to shake him to his core.

As for Nuganen’s shorter and chubbier Margus, he falls into the mold of one of Shakespeare’s comical rustics. He is as fretful as Ulfsak is steadfast, and the pair play well off one another.

Initially, the war arrives at Ivo’s workshop in the form of two Chechen mercenaries in a Jeep who are fighting for the Abkhazian side. Their minds are clearly focused on their military duties as they at first assume that the tangerine crates he is building are for guns. Ivo, however, maintains a calm resolve as he fulfills their request for food back at his modest home. The men check out his family photos and spy a young woman with a beautiful smile. Turns out she is Ivo’s granddaughter who fled with the rest of his family back to Estonia.

Knowing that the soldiers are prepared to remark about her looks, Ivo cuts them off with the stern words: “Don’t comment. Don’t dare.” They, of course, obey this man they refer to as “grandpa.”

They take off but soon will return—one dead, one still alive but wounded—after they run into a van full of rival fighters on the road near Ivo’s land. Turns out, one of the Georgians also is alive though his injuries are more serious. A doctor is summoned and cool-headed Ivo devotes himself to nursing them back to health and diffusing the growing tension in the form of ugly schoolyard-level insults and vows of revenge for their fallen comrades as both bedridden men slowly recover. Ivo’s rule: “No one can kill anyone in my house unless I want it to happen.”

Eventually, though, these mortal enemies can’t help but strike a somewhat uneasy truce. Opposing ideologies and tribal allegiances become slowly diminished in importance after benefiting from the selfless kindness provided by Ivo and the ever-hovering threat of senseless violence and death outside.

By the end, Georgian director-writer Zaza Urushadze has performed a small miracle by presenting the insanity of war in such a compact form. The film's insights might not be of the grandiose sort found in Hollywood’s massive battle epics. Nor are they unique. But they are perhaps even more affecting because of the film’s intimate scale. In a way, the movie itself alludes to this fact when Ivo, Margus and the doctor push the van into a ravine in order to prevent any bloody reprisals from passers-by.

As they watch it tumble, the doctor observes, “I thought it will explode.” Says Margus, “They explode in cinema.” Adds Ivo, rightfully getting the last word: “Cinema is a fraud.” 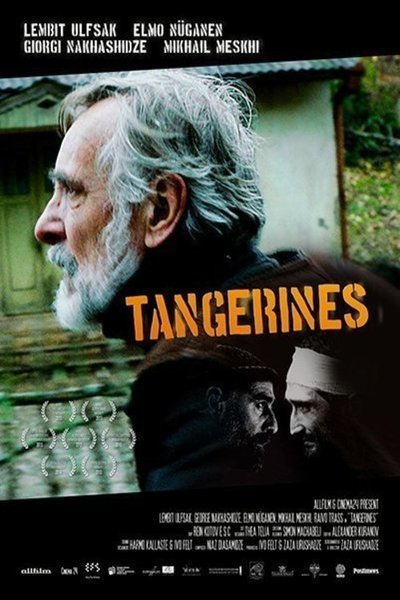