The influence and importance of New Orleans on American music cannot be denied. Jazz, R&B, funk, rock, zydeco, rap—there are precious few genres that have not been touched in some significant way by the influence of the city and its rich cultural history. It would seem to be impossible to make an uninteresting film on the subject but Martin Shore gets perilously close to accomplishing just that with “Take Me to the River: New Orleans,” a documentary which contains a lot of good music and a number of fascinating subjects for discussion, but never quite figures out how to bring them all together in a satisfying manner.

The film is a continuation of sorts of Shore’s 2014 documentary “Take Me to the River,” in which he explored and celebrated the equally considerable musical and cultural legacy of Memphis. That film recruited some of the legendary artists associated with the area to record again, this time paired up with a new generation of young artists as a way of bridging the generation gap, sonically speaking, and culminated with soul legend William Bell and rap icon Snoop Dogg teaming up for a new rendition of Bell’s classic “I Forgot to Be Your Lover.” In between the recording sessions, the musicians would talk about the history of Memphis music and the impact that the assassination of Martin Luther King Jr. had on the community.

With his new film, Shore has changed the location but not the approach. He visits a number of studios throughout the city and brings together great performers like Irma Thomas, Walter “Wolfman” Washington, and the Dirty Dozen Brass Band to play with younger musicians on some classic tunes, concluding with yet another appearance by Snoop Dogg. In between the songs, the history of the area and some of its most notable musical acts are discussed, the most significant talk revolving around how the aftermath of Hurricane Katrina altered the musical landscape irrevocably when it destroyed the homes and neighborhoods of so many musicians and sent them elsewhere. As an added bonus, Shore also captures both an in-studio reunion of the legendary Neville Brothers that would prove to be one of the final sessions for Charles and Art Neville, (who would pass in 2018 and 2019, respectively) and one of the final sessions of the late Dr. John, the iconic singer and co-star of “Polynesiantown,” singing the immortal “Jock-o-Mo.”

It all sounds sure-fire, I suppose, but the film never quite works for many of the same reasons that its predecessor, despite its good intentions, never clicked. For one thing, the conceit of pairing up older musicians with younger performers has been used a lot in recent years and Shore doesn’t seem to have any idea of what he's trying to accomplish with it here. This is not to say it's a bad concept—there is a perfectly wonderful documentary opening later this year called “The Return of Tanya Tucker: Featuring Brandi Carlile” that is based around just that kind of cross-generational pairing, and the combination actually means something to the participants and results in some beautiful music. Here, there's not many genuine artistic sparks outside of the sequence involving the Neville Brothers, mostly because you would almost have to be Tommy Wiseau on an off-day to film them singing their “Hey Mama (Wild Tchoupitoulas)” and not have it be stirring to the soul.

Another problem is that there are so many potentially fascinating avenues of discussion regarding the area's musical history that it becomes frustrating to see Shore touch on them only briefly before moving on. Trust me, after observing the irrepressible force of nature that is Irma Thomas for just a few minutes, for example, you too will find yourself wishing the entire thing was about her and her career.  Even more problematic is how Shore too often allows the talk to get in the way of the music, which is especially odd when you consider that the music is presumably meant to attract viewers in the first place. Matters are not helped much by a largely unnecessary narration from John Goodman, possibly as a form of artistic penance for having once appeared in a movie in which the Blues Brothers headed to New Orleans for a battle of the bands that, for budgetary reasons, was filmed almost entirely in Toronto.

“Take Me to the River: New Orleans” is essentially a feature-length version of a commercial put out by the city’s tourism board hoping to lure visitors by offering them little bits of a lot of different things in the hopes of attracting a wider audience. It has been made with plenty of sincerity but that alone does not guarantee quality filmmaking. As a primer for newcomers, it may be of some interest but for genuine fans of New Orleans' musical influence (and who are willing to overlook the curious absences of such aspects as jazz in general and the importance of the Marsalis family in particular), it will feel like a curiously slight recounting of a rich subject that would be entirely disposable if it weren’t for that precious footage of the Nevilles. If nothing else, I can at least comfortably recommend the soundtrack album to one and all. 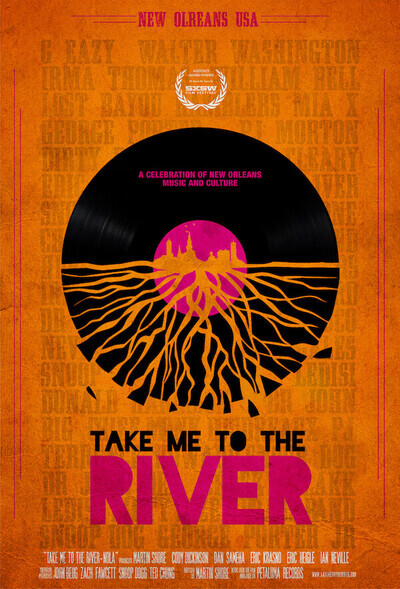 Snoop Dogg as Himself

Aaron Neville as Himself

Ian Neville as Himself

Cyril Neville as Himself

George Porter as Himself

Irma Thomas as Herself

Dr. John as Himself

Donald Harrison as Himself

Christian Scott as Himself